The recent U.S. midwest tornado outbreak is set to go down in history as one of the most active starts to the convective storm season and one of the most damaging on record as early loss estimates begin to be reported. The last two weeks have seen a huge number of convective storms which have had damaging wind, hail and tornadoes with the number of tornadoes to have touched down so far this year well above historical averages.

Catastrophe modelling firm EQECAT have issued an early estimate of the possible losses the re/insurance industry should prepare for. They suggest that insured losses from the recent tornado outbreak will be in the region of $2 billion to $5 billion. It’s believed that the final figure will be towards the upper end of that estimate. Another catastrophe modeller AIR Worldwide said that the recent outbreak of tornadoes has a repetitive nature and geographical concentration similar to a 2003 outbreak which caused $3.2 billion in insured losses.

The BBC reports that the death toll from the recent tornado outbreak has reached 340 making it the second deadliest tornado outbreak on record in the U.S. It is expected that more bodies will be found once the clean up reaches them.

Tornado activity this year is approximately 30% higher than the historical maximum, as this graphic below from the NOAA shows, with more than 350 reported tornado touchdowns over a recent 10 day period. 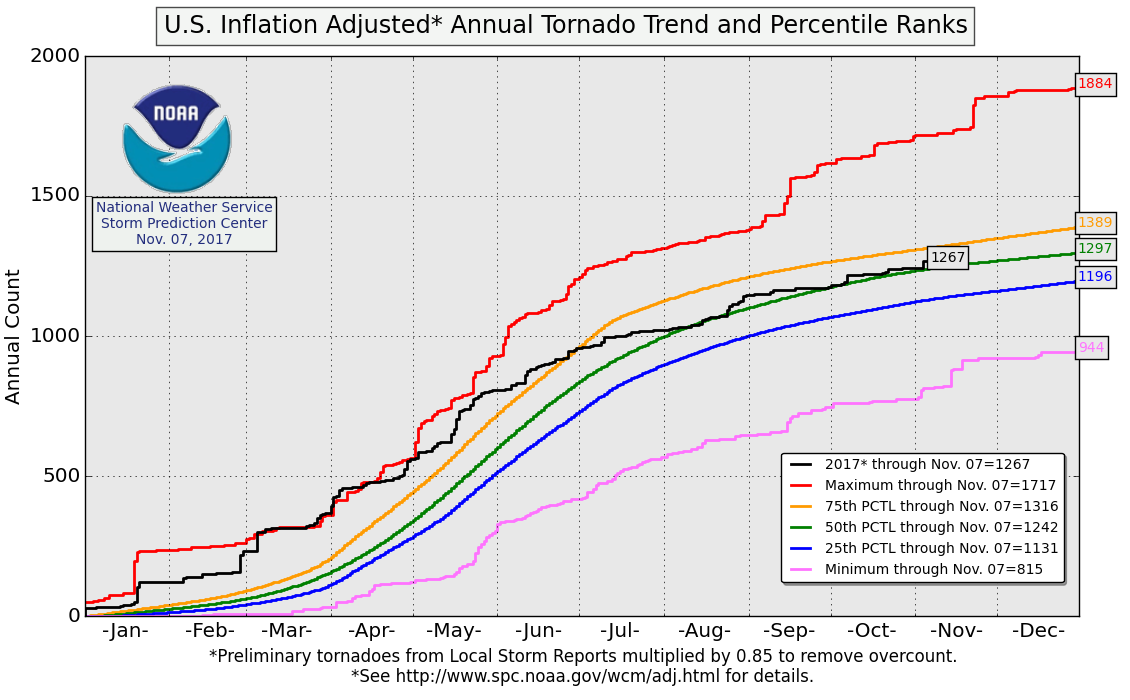 EQECAT’s report says that there have been over 10,000 buildings destroyed in the recent outbreaks. It’s certainly safe to assume that we’re looking at a multi-billion dollar insured loss from this particularly violent tornado outbreak.

Mariah Re triggers based on insured industry losses reported by PCS. For Mariah Re a covered event is any severe thunderstorm with an event index equal to or greater than $10m. The initial attachment point for the first risk period is $825m with a maximum event index for a single event of $300m for the Series 2010-1 deal and the Series 2010-2 attaches at $725m (meaning it could be triggered by as few as three major events). However, Mariah Re Ltd. has no exposure to events in the states of Alabama, Tennessee or Mississippi, three of the states badly affected by storms. The exposure in Georgia is minimal too, meaning that losses from the recent events are unlikely to contribute much to the aggregate losses recorded under Mariah Re.

“Fortunately, out of the four CAT Bonds in our portfolio, that have exposure to US severe thunderstorm risk, three bonds have only very marginal exposure. Although no reliable loss numbers have been published, we do not expect that the losses will be high enough to trigger payments of these bonds. One position (1.9% of NAV) aggregates losses from severe thunderstorms over the year, based on state weighted insured industry losses. However, this bond is not covering the states of Alabama, Tennessee and Mississippi and has insignificant exposure to Georgia, hence the contribution to the aggregate loss should be minimal.”

So while the recent spell of tornadic activity is unlikely to have any effect on catastrophe bonds alone, it could contribute to overall aggregate losses for some deals (such as Mariah Re). This means that if the year continues to bring higher than normal convective storm formation, the market will begin to look more closely at the losses that result from severe thunderstorm activity and will keep one eye on any cat bonds which could be triggered based on aggregate industry or a ceding re/insurers own indemnified losses.