Insurance and reinsurance sector losses from severe convective storms in the United States have already passed $11 billion in 2018 as of the middle of August, making this the eleventh consecutive year that thunderstorms, tornadoes, hail and related perils from convective weather have driven double-digit impacts.

According to the latest data from broker Aon the economic impacts of severe convective storms in the U.S. has passed $15 billion for the year-to-date, meaning that currently around 73% of the economic loss is set to be passed on to insurance and ultimately reinsurance interests. 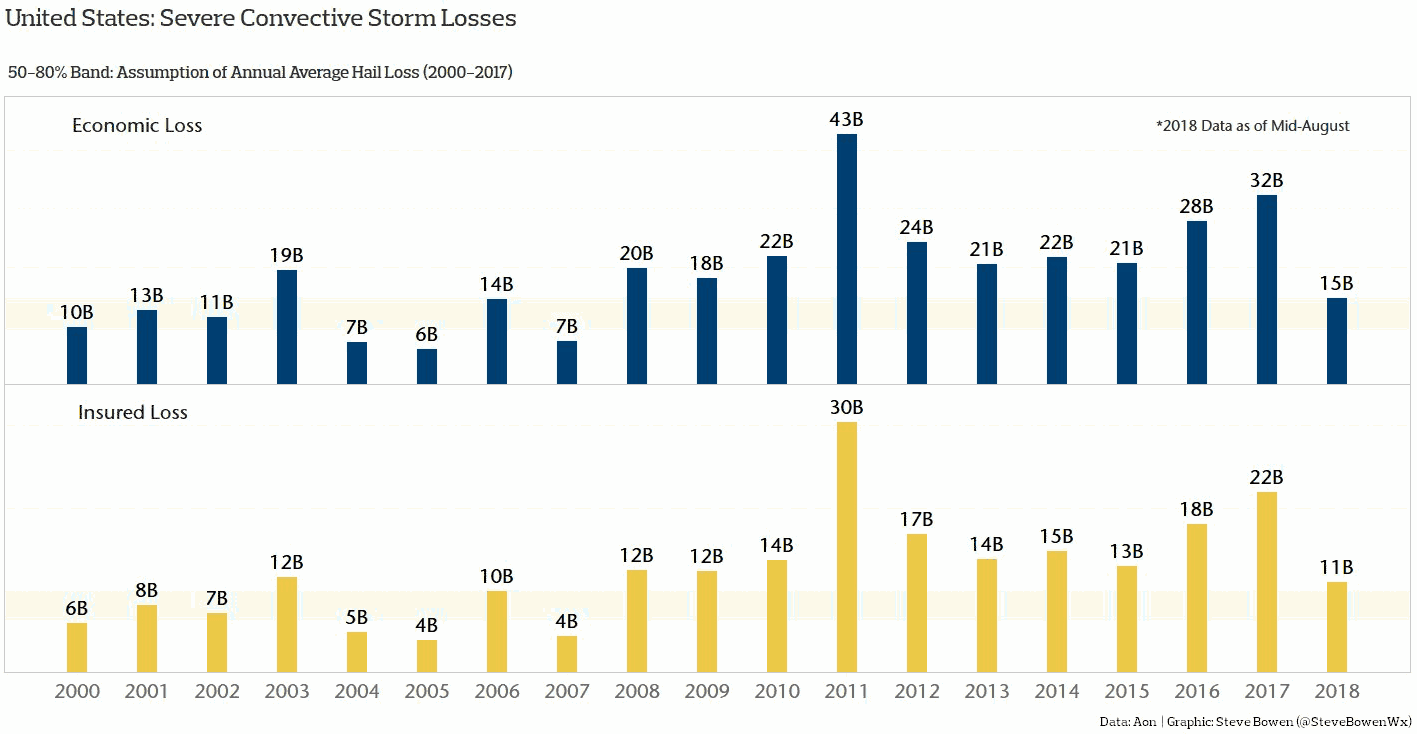 The average annual insurance industry loss from severe convective storms over the data set shown above is around $12 billion, so 2018 is well on the way to surpassing that.

However if you look at the average over just the last decade, the average is higher at around $16.7 billion. So 2018 has a way to go to surpass that figure.

In 2018 the percentage of economic losses that are insured has been relatively high compared to other years, as some of the most significant severe convective storm outbreaks have been seen to occur in densely populated and built up areas.

June 2018 alone saw numerous outbreaks of severe thunderstorms, characterised by large hail and damaging straight-line winds, which Aon estimated would drive an economic loss of around $4 billion, with the insurance industry taking more than $3 billion of the bill.

Two days of severe convective storms and large hail that impacted the metro area of Denver, Colorado drove a significant portion of the June industry loss from this peril.

May 2018 saw similar levels of impacts, with convective weather effects including thunderstorms, tornadoes, large hail, flooding and strong winds estimated to have caused somewhere around $2 billion or more of insurance and reinsurance industry losses by Aon.

Large hail remains the major driver of these industry losses from convective storms and severe thunderstorms, which as we reported recently now results in over $10 billion per year of economic losses on average.

Steve Bowen, a meteorologist at Aon and Director of the brokers Impact Forecasting unit, highlighted recently that hail can contribute as much as 50% to 80% of severe convective storm losses in any given year, with tornadoes, wind and flooding the rest.

So far in 2018 Aon has counted 10 billion dollar weather or catastrophe loss events in 2018, of which six are attributable to the severe convective storm peril, demonstrating the driver of insurance and reinsurance industry losses that it has become.