Widespread flooding and severe convective thunderstorm weather in the U.S. over just the last week is expected to result in an economic loss of over $1 billion and insurance or reinsurance industry impact in the hundreds of millions of dollars, according to Aon Benfield. 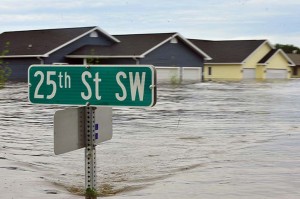 In the reinsurance brokers latest weekly catastrophe report, published by its Impact Forecasting division, it details the extent of damage caused by the recent torrential rainfall, resulting flooding and a spate of severe convective storms and high wind events.

Areas from California across to the Midwest and south to the Gulf Coast have been affected as storm systems developed and tracked across the country. The southern Plains and Southeast have been particularly badly hit, with “exceptional” rainfall leading to river and flash flooding, with parts of Louisiana, Arkansas, Texas and Mississippi the worst hit.

Impact Forecasting explains the climatic conditions that have caused this severe weather:

The weather pattern across the United States since March 4 has been marked by the presence of abundant moisture, areas of low pressure and frontal boundaries at the surface and in the mid/upper levels of the atmosphere, unseasonably warm temperatures, and sufficient atmospheric instability. All of these conditions combined to bring extensive precipitation and thunderstorms for much of the country.

The Pacific Northwest and Canada’s British Columbia were also affected. The presence of simultaneous atmospheric river events – Pineapple Express in California and the Maya Express in the Mississippi Valley – brought ample tropical moisture.

The outbreak of severe weather in the U.S. from March 13-17 was primarily associated with the development of multiple surface areas of low pressure in the Plains and Midwest. This followed on the back of a vigorous upper level low that had slowly migrated northeastward from Texas into the Great Lakes. The upper low was also responsible for the historic flooding in the southern Plains and Mississippi Valley. As the surface low developed on March 13, the Storm Prediction Center (SPC) declared an Enhanced Risk of severe weather for much of Arkansas. Given the state’s location near the confluence of the surface low, upper level trough and vertical shear, atmospheric conditions were ripe for supercell thunderstorms that were conducive for producing large hail, damaging winds and isolated tornadoes.

In terms of the expected losses from these events over the last week, Impact Forecasting notes that it is too early to provide accurate estimates but it does expect them to be significant.

Flood waters need to recede before damage can be assessed and the level of damage caused by convective storms has been quite costly to homeowners, commercial interests and autos, Impact Forecasting said.

That leads the company to expect that aggregated economic losses from the flooding and severe thunderstorms will exceed $1 billion, while the insurance industry loss will reach well into the hundreds of millions.

The costliest component to private insurers will come as a result due to damage resulting from tornadoes, large hail and damaging straight-line winds. However, there have also been reports of sewer backup damage claims that are often covered by homeowner policies.

In the case of the ongoing floods in the southern Plains and Lower Mississippi Valley, much of the insured cost will depend on National Flood Insurance Program (NFIP) penetration rates within each impacted county or parish.

El Nino has been blamed for creating the atmospheric conditions responsible for recent weather and this latest spate of events continues the series of attritional weather related losses that the insurance and reinsurance industry has suffered in recent months.

Whether any of these latest losses will result in reinsurance claims, or any impact on ILS funds collateralised reinsurance positions, remains to be seen. But as ILS capital gets increasingly close to the risk and aggregate covers with broadened terms proliferate, the chances of ILS market exposure to events such as these is increasing all the time.