In line with the previous two months U.S. commercial P&C rates remain down 4% year-on-year in February, as low volumes contributed to little movement in rates across the majority of business lines, according to recent commentary from MarketScout, and Keefe, Bruyette & Woods (KBW).

None of the contributing factors to the softening, and competitive insurance and reinsurance landscape show signs of abating anytime soon, so it’s unsurprising that MarketScout and KBW, as in December 2015 and January 2016, note that U.S. commercial property & casualty (P&C) rates remain down an average 4% in February.

Artemis discussed last month how U.S. P&C rate movements in January maintained the negative trend witnessed in the final months of 2015, a trend that is so far continuing as the market moves further into 2016.

“There was little movement in rates in most sectors. The only notable change was in manufacturing, which decreased from minus 2 percent in January 2016, to minus 5 percent in February 2016.

“Traditionally, February has always been a slow insurance month, so the lack of activity in rates is not surprising,” explained Richard Kerr, MarketScout’s Chief Executive Officer (CEO), in the firm’s latest P&C Insurance Market Barometer.

Essentially, then, rate movements have remained on average flat at -4% across all U.S. commercial P&C business lines for the last three months, so avoiding any further major declines in February but also failing to show signs of any positive rate movement in the near future. 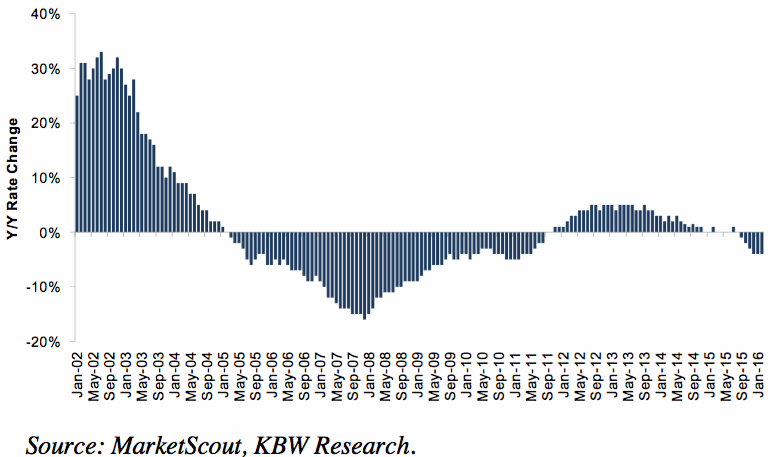 KBW, provider of the above chart also commented on the U.S. commercial P&C market landscape, echoing views of previous months that it “expects rates to remain pressured in 2016.” With reinsurance renewals expected to see further declines in rates it is likely that commercial P&C will witness a similar scenario.

By coverage class MarketScout reveals that with the exception of EPLI and Crime, all lines decreased by between 1% and 5% during February, with commercial auto, surety, and BOP at the lower end, and commercial property at the upper end – being the only business line to decline by 5% in the month.

This isn’t too surprising, as the wealth of alternative reinsurance capital that continues to enter the space, albeit at a somewhat slower pace than before, is still largely focused on property lines that are easier to access and understand, and its pressures continue to trickle down and negatively impact primary lines.

← Older article Pool Re: No ILS or collateralised terror retro yet, but open to it