Continuing to accelerate the rate of decline witnessed in the last few months, U.S. commercial P&C rates were down by -4% in December, as the battle amongst insurers for market share continues, according to the latest commentary from MarketScout and KBW.

At the same time there is a growing amount of alternative capital looking to access U.S. commercial and large property insurance risks directly, through fronting or arrangements with managing agents. This looks set to exacerbate the softening in commercial P&C and could actually accelerate the declines into 2016.

Commenting on the current pricing landscape, MarketScout Chief Executive Officer (CEO), Richard Kerr said; “Market cycles are part of our life, be it insurance, real estate, interest rates or the price of oil. Market cycles are going to occur without question. The only questions are when, how much and how long. While it may seem the insurance industry has already been in a prolonged soft market cycle, we are only four months in.”

Adding; “The market certainly feels like it has been soft for much longer, because rates bumped along at flat or plus 1 to 1.5 percent from July 2014 to September 2015. The technical trigger of a soft market occurs when the composite rate drops below par for three consecutive months.”

It’s not surprising to hear Kerr discuss the market in this manner, and with further pressures at January renewals for reinsurance entities, exacerbated by the continued presence of alternative reinsurance capital and the benign loss environment, it’s unlikely U.S. P&C rate declines will significantly alter anytime soon.

The chart below from MarketScout shows the U.S. P&C insurance rate environment through 2015, with rates turning negative in September 2015. 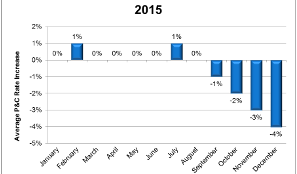 This second chart shows the U.S. average P&C rate trend of the last 15 years, which shows an average decline of -1% for 2015 as a whole. It also shows that while softening, the U.S. P&C market is by no means truly soft yet and that’s an important distinction, as now we see alternative capital beginning to flow more directly to these markets efficiency of capital could prolong this softening for longer than in previous cycles.

“It seems the length and veracity of the market cycles has become less volatile in the last five or six years. Thus, the impact of a hard or soft market in today’s environment may be 5 or 6 percent up or down,” said Kerr.

Adding; “Underwriters today have better tools to price their products and forecast losses. Further, the chances of a rogue underwriter or company are greatly reduced by the industries’ checks and balances. There may be less excitement but there are probably far fewer CEO heart attacks.”

It’s expected that re/insurance market capacity will continue to find its way into primary business lines, and commercial business will likely continue to feel the impact of the current supply/demand imbalance in the global reinsurance market, a trend that shows no signs of letting up anytime soon.

– U.S. commercial P&C rate movements back to flat in August.