An increase in catastrophe activity during the first-half of 2016 across the U.S. resulted in insured losses of $13.5 billion, which is 20% higher than the ten-year historical average, according to Property Claim Services (PCS).

PCS designated 27 U.S. events during the first six months of the year, incurring insurance and reinsurance industry losses of $13.5 billion, and that has the potential to increase further still as resurveys are pending for seven H1 events, says PCS.

In order for PCS to designate an event a catastrophe it must incur an industry loss of at least $25 million and impact a substantial number of insurers and insureds, says the firm.

The ten-year historical average (2007 – 2016) for U.S. insured cat losses is roughly $11.6 billion, meaning that the $13.5 billion reported by PCS in H1 is 20% higher than this average, driven by the increased frequency of events. In fact, PCS notes that the 27 designated events recorded in first-half of this year are above the ten-year frequency average, of 21 events.

“First-half catastrophe losses are up modestly year over year, while event frequency has spiked significantly. Second-quarter losses are slightly above the ten-year average of $8.4 billion, while frequency is in line with the past ten years.

“But beneath the headline stats of what, in aggregate, has been a mundane first half are significant concentrations of loss,” explains PCS. 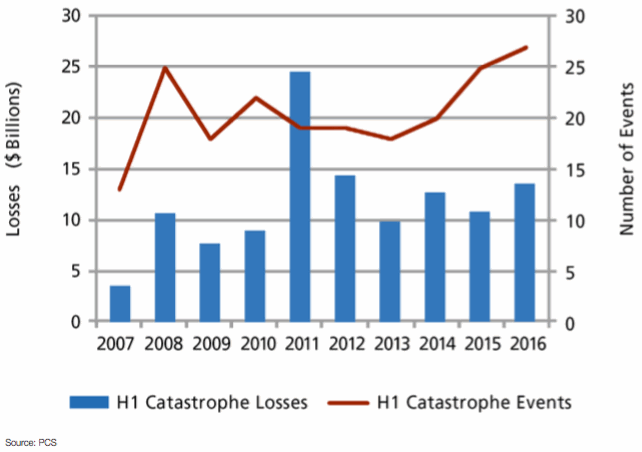 U.S. catastrophe losses in the second-quarter of 2016 alone totalled $8.5 billion, which is just below the ten-year average of $8.6 billion. PCS notes that only two second-quarter U.S. cat loss totals have surpassed $10 billion, which occurred in 2011 and 2012, and as highlighted in the below graph. 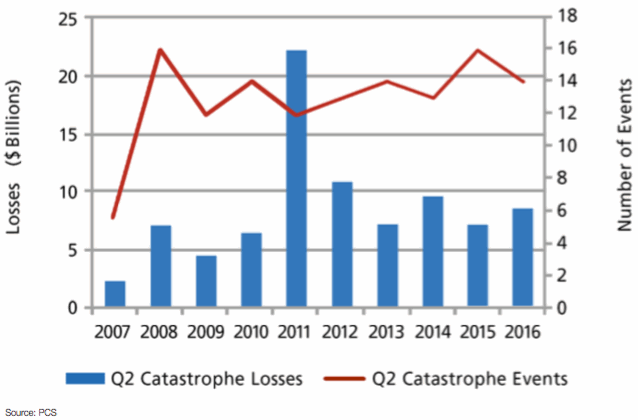 PCS underlined the concentration of U.S. cat losses experienced in H1, and also noted the occurrence of significant hail and flooding in certain states, perils that typically result in losses below the PCS-designation threshold but which spiked in 2016.

The only U.S. state to experience losses above the $1 billion during H1 was Texas, which topped the list of the top-ten catastrophe-affected states in the opening six months of the year, according to PCS. 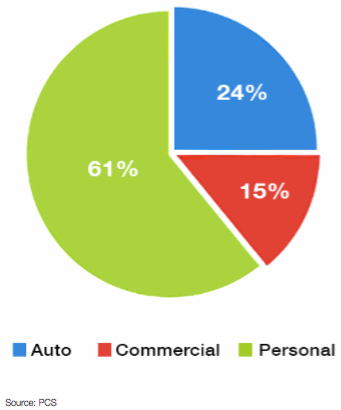 As shown by the above chart, personal losses accounted for the majority of H1 2016 activity, followed by auto and then commercial losses.

PCS also reports on designated events in Canada as well as the U.S., explaining that activity in H1 was fairly active and included the largest catastrophe event in the history of the Canadian market, in the Fort McMurray, Alberta wildfires.

“The sheer magnitude of the Fort McMurray event certainly affected year-over-year changes in insured catastrophe losses in Canada. Even with two quarters remaining in the year, 2016 has the highest annual catastrophe loss since the inception of PCS Canada in 2010,” explains PCS. 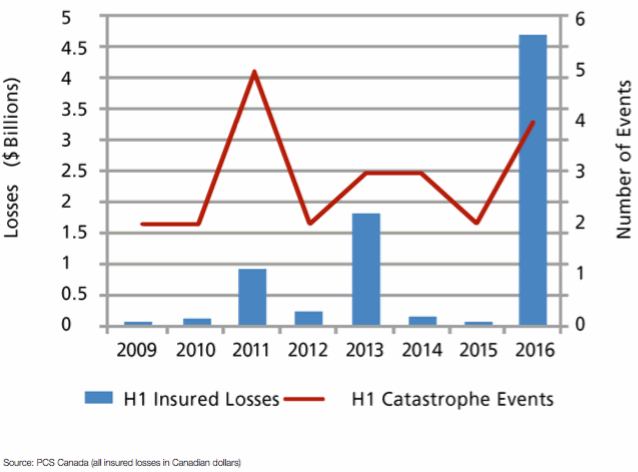 In total, PCS designated four events in Canada during H1, which incurred an insured industry loss of C$4.7 billion, with personal losses again accounting for the majority (83%) of losses, as seen in the U.S.

PCS has discussed previously how the frequency of catastrophe events appears to be on the rise, and it’s easy to see how losses can aggregate quickly across the U.S. and Canada, especially when large events as seen in Canada and Texas, really start to increase losses for insurers, reinsurers, and increasingly insurance-linked securities (ILS) funds/manager.