Typhoon Soudelor, once a super typhoon but now slightly weakened as it passes over cooler waters, is forecast to reintensify, perhaps to Category 4 status, before making a direct hit on Taiwan with damaging winds, waves and torrential rainfall expected.

Typhoon Soudelor is currently traveling directly towards Taiwan and is forecast to strike the island on Friday at some stage, the forward motion of the typhoon leaves some uncertainty as to exactly when it will make landfall.

However Taiwan and some of the southern Ryukyu islands will likely begin to feel typhoon Soudelor by late Thursday and then after crossing Taiwan the typhoon will impact the Chinese mainland later in the weekend.

Typhoon Soudelor peaked on Monday with winds estimated at around 180mph, making it the strongest storm in the world so far this year. Soudelor then weakened after striking Saipan and cooler waters have weakened the storm further.

Currently Soudelor has sustained winds estimated at 120mph with gusts of 150mph or higher. Sea surface temperatures rise as the storm approaches Taiwan and forecasters expect typhoon Soudelor will intensify a little, perhaps back to a Category 4 storm with sustained winds of as much as 138mph and gusts of 160mph+ at its peak on close approach to Taiwan, according to the JTWC.

As with any typhoon that approaches the mountainous terrain of Taiwan, torrential rainfall is expected with totals of 5 to 10 inches widely and isolated amounts closer to 20 inches in the northern part of the island. As a result landslides, mudslides and flash flooding are a key risk from typhoon Soudelor.

Damage from winds of 100mph and above will also be a risk, especially in coastal regions. However, some forecasters expect that even in the sheltered capital of Taipei wind gusts of reaching 75mph should be expected .

Flooding is also expected to be a concern for China in the regions surrounding typhoon Soudelor’s landfall there later in the weekend.

Thankfully it looks unlikely that typhoon Soudelor will regain Category 5 status again before reaching Taiwan. However this is a storm to watch and with insurance and reinsurance penetration high in Taiwan there is the potential for a hit from Soudelor’s losses.

The loss potential will depend on the impact to areas such as Taipei and other cities, where insurance penetration and therefore reinsurance industry exposure is highest.

Currently there are no catastrophe bonds exposed to losses form typhoon’s in Taiwan in the outstanding cat bond market. However, as with all major storms which threaten a developed country, there is the potential for exposure to collateralized reinsurance markets and retrocession if the storm maintains its strength up to landfall.

Typhoon Soudelor, located approximately 550 kilometers (340 miles) south-southwest of Okinawa, Japan, is currently tracking west-northwestward at 19 kph (12 mph). High-resolution, animated satellite imagery shows a deepening convective core surrounding a 33-kilometer (21-mile) wide eye with deep banding wrapping around the southern and eastern quadrants. The banding around the northern quadrant continues to struggle due to the presence of dry air. The current position is based on the small eye with high confidence. The initial intensity has been increased to 195 kph (120 mph) based on an assessment of increasing Dvorak current intensity estimates from all reporting agencies. Upper-level analysis indicates a generally favorable environment with low vertical wind shear and good radial outflow however, dry air is evident over the northwestern periphery of the system. Typhoon Soudelor is tracking along the southern edge of a deep-layered ridge of high pressure to the north.

Soudelor will continue on a west-northwestward track through the next two days under the steering influence of the aforementioned ridge. Over the next 12 hours, the system is forecast to intensify to 210 kph (130 mph) due to good outflow, increasing sea surface temperatures, and increasing ocean heat content. On Saturday morning (local time), Soudelor is forecast to make landfall over Taiwan then weaken rapidly as it transits across the mountainous terrain and emerge over the Taiwan Strait as a weak typhoon. On Saturday evening (local time), the system will make a second landfall over the eastern coast of China near Quanzhou. By Sunday morning (local time), Soudelor will approach the western extent of the high pressure ridge and turn poleward. The system will continue to deteriorate as it tracks inland, leading to the complete dissipation of the system over land by the end of the forecast period, or sooner. Forecast model guidance remains in tight agreement throughout the forecast period, lending high confidence in the JTWC track forecast.

BOSTON, August 5, 2015 – According to catastrophe modeling firm AIR Worldwide, Typhoon Soudelor, the strongest tropical cyclone anywhere on earth thus far in 2015 based upon estimated wind speed, continues to track toward Taiwan. Earlier this week, the system crossed Saipan, population 48,000, in the Northern Mariana Islands. At that time the eye of Soudelor was extremely small—estimated at just 4 miles wide—but the storm made a direct hit on Saipan and strong winds caused significant damage across the island.

“Since leaving Saipan, Typhoon Soudelor has increased in size and intensity and has tracked generally to the west around the southern periphery of the subtropical ridge,” said Dr. Kevin Hill, senior scientist at AIR Worldwide. “As of 12 UTC on August 5, the center was located at 20.0° N, 132.6° E, according to the Japan Meteorological Agency (JMA). Over the past 24 hours the system has weakened, its central pressure increasing from 900 hPa to 935 hPa, although Soudelor remains an intense and well-organized tropical cyclone.”

The JMA forecast anticipates little change in intensity over the next 12 hours followed by some strengthening prior to landfall on the east coast of central Taiwan late Friday or early Saturday local time (Figure 2). The JMA forecast indicates a central pressure of 925 hPa and 10-minute maximum sustained winds of 95 knots (~120 mph 1-minute sustained) prior to landfall. On this track, Soudelor would make landfall south of Taipei, although impacts would be felt across much of Taiwan.

Although not directly in Soudelor’s anticipated track, the northeast of the country, where the capital Taipei is located, is likely to be most affected because of the concentration of exposure there. Any deviation of the storm from its forecast track to the north will result in more serious impacts for Taipei, while deviation to the south would tend to lessen impacts there.

According to AIR, the eastern two-thirds of Taiwan is the least populated area of the island, consisting mostly of rugged mountain ranges and dense forests lining a rocky coastline. The island’s high mountains can lead to extreme rainfall totals when strong typhoons make landfall, so flooding is a concern in addition to wind damage. The steep coastal bathymetry on the east coast will serve to reduce the threat from storm surge, although low-lying portions of the coastline could still see flooding.

Dr. Hill concluded, “After crossing Taiwan, Soudelor is forecast to make its final landfall in China, although interaction with the mountainous terrain of Taiwan will lead to considerable weakening prior to its arrival.”

We will update this article as and when there is any new information to share. 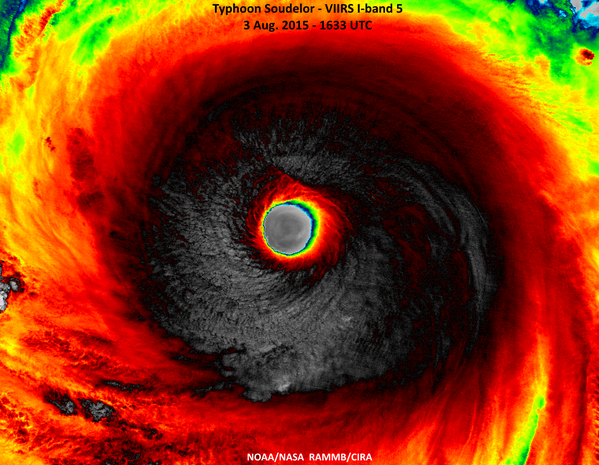