Typhoon Rammasun could reach category 4 before landfall in China

Typhoon Rammasun is quickly approaching southern China and northern Vietnam with rapid intensification occurring meaning that the typhoon could reach category 4 status, one short of super typhoon, before it makes landfall.

Unofficial reports suggest that typhoon Rammasun has intensified explosively as it crosses the south China sea with reports suggesting that its winds may already have approached 140mph. However the latest from the typhoon warning center says winds remain lower but that intensification is likely and Rammasun is generally expected to be a high category 3 or low category 4 typhoon by the time it makes landfall on China’s Hainan island on Friday.

Typhoon Rammasun has already made one deadly impact on the Philippines, where winds, rainfall, flash flooding and storm surge are responsible for deaths and extensive damage. Now it is making its way towards a second landfall in Hainan southern China after which it is forecast to head towards northern Vietnam for a third landfall.

Hong Kong is expected to be missed by the storm which will brush to the south. Hainan area should expect a strong storm surge, damaging winds with widespread impacts, torrential rainfall and a storm with the potential to cause extensive damage. Northern Vietnam could see the storm make landfall around the Hanoi area, with wind, rain, flooding and landslides the likely impact.

As Rammasun has intensified more rapidly than expected it is uncertain just how strong the storm could get. Reports say that wind shear remains low in the area the storm is currently crossing, which could lead to further intensification before it makes its approach towards landfall in China.

Given the relatively low level of insurance penetration in the Philippines, much of China and also Vietnam, the total insurance industry loss from typhoon Rammasun is not expected to be huge. The economic loss and death toll could sadly be very high though. Storms like this remind us of the job insurance and reinsurance has to do in protecting countries and people from the financial impacts of natural catastrophes and weather events.

A tracking map for typhoon Rammasun can be seen below and this will be updated as the storm makes its approach. 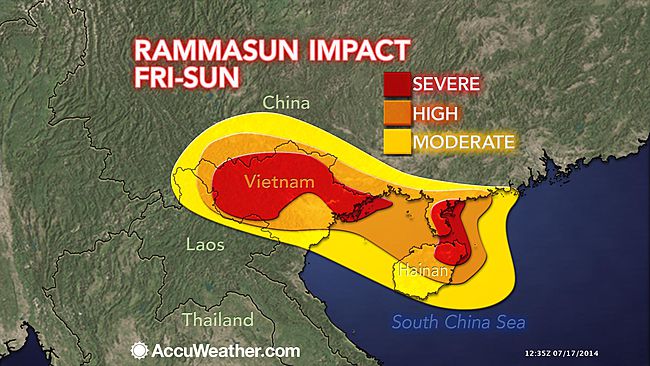 The latest update from Aon Benfield’s Impact Forecasting team can be found below:

DISCUSSION
Typhoon Rammasun, located approximately 535 kilometers (330 miles) south of Hong Kong, is currently tracking northwest at 19 kph (12 mph) across the South China Sea. Animated satellite imagery shows that the cyclone has continued to strengthen as a well-defined 30-kilometer (18-mile) wide eye has developed and convective banding has deepened. High resolution imagery shows that as the system has strengthened, banding has increased around the whole system and convection around the eyewall has deepened and become more symmetric. Upper level analysis shows a favorable environment with vigorous outflow and low vertical wind shear. The initial position from the JTWC is based upon the defined eye feature with high confidence; while the initial intensity is based upon the average of Dvorak estimates. Typhoon Rammasun is steadily tracking west-northwest to northwest along the southern edge of a high pressure ridge to the northeast of the system.

Typhoon Rammasun is forecast to continue on a generally west-northwestward track through the remainder of the forecast period as the high pressure ridge is expected to stay to the northeast of the system as it moves across the South China Sea. It is expected to continue to strengthen until Friday afternoon (local time) before it feels the frictional effects of Hainan Island and begins to weaken. Typhoon Rammasun is expected to make landfall on Hainan Island on Friday evening (local time) after which a weakening trend is forecast. This weakening will become more rapid as the system makes another landfall near the Chinese/Vietnamese border and the system is expected to have dissipated by Sunday evening (local time) as it moves further inland.

The forecast models are in good agreement with the track forecast for Typhoon Rammasun which gives high confidence in the JTWC forecast track.