Typhoon Meranti insured losses could be as high as $1.15bn: AIR Worldwide

According to risk modelling firm AIR Worldwide, typhoon Meranti’s impact on mainland China could have resulted in insurance and perhaps reinsurance industry losses of up to $1.15 billion, the firm estimates. 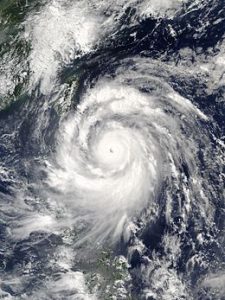 AIR says that industry-wide insured losses will likely range between $650 million (CNY 4.3 billion) and $1.15 billion (CNY 7.7 billion). AIR says the wide range in the estimate of modeled insured losses “reflects uncertainty in the meteorological parameters associated with this event.” Additionally, there is uncertainty in the insurance take-up rates for much of the region, AIR notes.

“It was the strongest storm in the world this year and the most intense typhoon since Super Typhoon Haiyan struck the Philippines in 2013,” commented Dr. Peter Sousounis, assistant vice president and director of meteorology at AIR Worldwide. “Although Meranti did not make landfall on Taiwan, much of the country was impacted by high winds and substantial precipitation—rainfall totals as great as 700 millimeters (28 inches) have been reported—due to the massive, 560-kilometer (350-mile) wind field.”

Dr. Sousounis, continued; “Having passed south of Taiwan on September 14, Typhoon Meranti made landfall at 3:05 a.m. local time on Thursday, September 15, in the Xiang’an District of Xiamen City, in eastern China’s Fujian Province. Following its interaction with Taiwan, Meranti weakened significantly as it approached China and it came ashore with a JMA-estimated central pressure of 940 mb, the equivalent of a Category 4 hurricane—the strongest typhoon in the region since 1949.”

If the insured losses near the $1 billion mark there is likely to be some level of reinsurance support required, for some of the exposed insurers. Regionally, those operating in China often utilise a good degree of reinsurance protection for their catastrophe exposures. Whether that would result in any losses, or impact to deductibles, for ILS funds participating on China focused property catastrophe reinsurance programs is uncertain.

It’s worth remembering though, that the impact of Meranti into China is a reminder of the potential for ILS markets in the region.