The western Pacific typhoon season continued to be active with the latest major storm, typhoon Matmo, targeting a first landfall on Taiwan where it will likely be a Category 2 storm followed by a second landfall in China as a weaker, probably Cat 1 typhoon.

Typhoon Matmo (also known as typhoon Henry in some regions) has been crossing the Pacific and gradually increasing in intensity over the last few days. The storm passed the Philippines on its north westward track, bringing some heavy rains to the country, but the path Matmo has taken has not deviated and the forecasts all agree that a landfall in Taiwan is likely Tuesday night local time.

Forecasters say that while Matmo is not the best developed Pacific typhoon, the eye structure looks weak, it is over an area of ocean where further intensification is likely with wind shear decreasing and ocean temperatures warm. As a result the current forecast calls for typhoon Matmo to reach the equivalent of Category 2, with sustained winds of around 90mph to 100mph by the time it makes landfall in Taiwan.

Rainfall is a real concern as Matmo is carrying a lot of moisture. CNN meteorologist Brandon Miller warned that Taiwan could see rainfall totals of up to half a metre as the typhoon crosses the mountainous regions, which could result in a severe landslide risk and flooding.

Typhoon #Matmo could bring a month’s worth of rain to #Taipei – half a meter or more in the mountains- by Wed AM. pic.twitter.com/idL6MzLmAF

As this image shows the impact to Taiwan is expected to be most severe at its northeastern tip, which if typhoon Matmo makes a direct hit could include Taipei. The impact on China could also be widespread, although Matmo is forecast to have weakened to a category 1 storm or even further down to a tropical storm by the time it reaches China. After China it is possible that Matmo will cause some heavy rains and flooding on the Korean peninsula as well, so this typhoon could have a wide reaching effect. 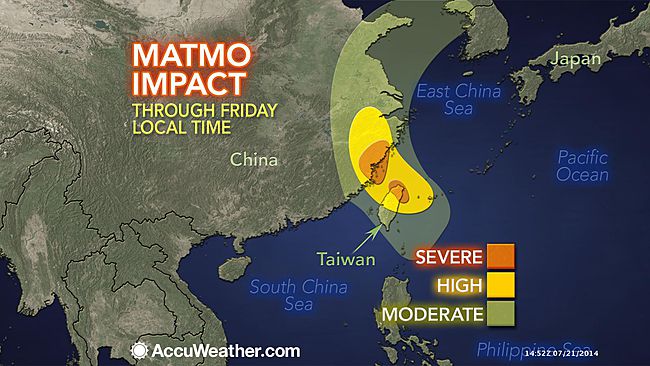 There are no catastrophe bonds which have exposure to typhoon Matmo. In fact there have never been any Taiwan typhoon cat bonds that we are aware of. However there is a significant exposure to local insurers and possibly to the reinsurance market as well, particularly if typhoon Matmo intensified during its last hours over the sea and makes a direct hit on Taiwan impacting the capital Taipei.

As a result there is of course the potential for a large loss from typhoon Matmo to impact some ILS funds which participate in Asian property catastrophe reinsurance programmes. With ILS players increasingly looking to private transactions and sourcing collateralized reinsurance business, some exposure to Taiwan and also China typhoon is inevitable for very large insured loss events.

If the forecasts remain and Matmo does not intensify in its final hours over the ocean then this will likely be a local insurance event only with no impact on global reinsurance markets.

Reinsurance broker Aon Benfield’s Impact Forecasting division had the following to say in a 17:00UTC update on 21st July:

DISCUSSION
Typhoon Matmo, located approximately 925 kilometers (575 miles) south-southwest of Okinawa, Japan, is currently tracking northwest at 21 kph (13 mph). Animated satellite imagery shows that the central convection has expanded and deepened slightly with an intensive convective banding feature over the southern edge of the system, which wraps tightly into the low-level circulation center. The current position is based on the animated satellite imagery and high-resolution satellite images with high confidence; the initial intensity estimate is based on Dvorak intensity estimates. Upper level analysis indicates the system is located in a favorable environment with low vertical wind shear and excellent outflow towards both the pole and equator. Matmo is tracking along the southwestern periphery of a deep sub-tropical ridge of high pressure that is located to the northeast.

Typhoon Matmo is forecast to remain on its current track under the steering influence of the ridge to the northeast for the next 48 hours. Improving upper level conditions and warm sea surface temperatures in the Philippine Sea are conducive for further intensification of the system over the next 1-2 days and are expected to lead to a peak intensity of the system of 360 kph (225 mph) as it approaches Taiwan. The system is then expected to track across the Taiwan Strait and make landfall over the Chinese Southeastern Seaboard by Wednesday night (local time). After this, a mid-latitude trough, approaching from the northwest, is expected to weaken the sub-tropical ridge and cause Matmo to turn northward by Thursday night (local time). By this time, the system will be well inland and then re-curve north-northeastward along the western edge of the ridge.

Looking further ahead in the forecast period, rapid decaying of the system is expected due to the frictional effects of land. It will emerge over the Yellow Sea as a Tropical Depression by Saturday evening (local time). Available model guidance has shifted slightly southward but remains in tight agreement lending high confidence to the JTWC forecast track, which is positioned close to the model consensus.