Once again the Philippines faces a powerful and dangerous storm as typhoon Koppu, also know as Lando, approaches a landfall in the coming hours. The typhoon is a Category 4 storm, with winds of 130mph+ and the forecast threatens extreme rainfall and flooding in its path.

Update 17th Oct, 15:30 BST, 10:30 EST: Koppu or Lando has intensified as many expected or forecast. Now super typhoon Koppu has sustained winds of around 150mph and gusts of 185mph, increasing the threat from wind damage and also storm surge. The slow approach of super typhoon Koppu also gives time for the surge to build, which could exacerbate the impacts of this storm.

The latest JTWC forecast shows a potential for a Category 5 landfall. If that is the case the damage around the landfall area could be extensive.

Super typhoon Koppu (Lando in the Philippines) is currently situated to the east of the northern island of Luzon, Philippines, with the latest forecast showing a Category 4 typhoon with sustained winds of 150mph and gusts of 185mph approaching landfall. The storm threatens a major impact to the Philippines and is likely to cause significant economic financial impact, with a smaller insurance and reinsurance impact due to low penetration rates in the country.

Typhoon Koppu has developed a very large core to the eye of the storm (local radar loop here) and forward motion has slowed, in the latest JTWC track, which as the storm crosses warm waters on approach to the Philippines could suggest further intensification, with some meteorologists now debating a super typhoon designation before landfall.

With a large eye and strong winds, perhaps even strengthening as landfall approaches, a wide swathe of coastline is expected to face potentially damaging winds. Forecasters also warn of a storm surge of 2 meters, so over 6 foot, in places.

However it is rainfall that could become the major concern for the majority of Luzon, as the Philippines is said to be facing a number of days of torrential and extreme rainfall due to typhoon Koppu, with some suggesting rainfall totals of as much as 40 or 50 inches (one publication suggests 6 foot of rain).

A slow-moving typhoon dropping such extreme rainfall in its path could be devastating in terms of river flooding, landslides and other impacts. With Luzon home to almost half of the Philippines population, a significant number of people will be affected by Koppu’s rains. 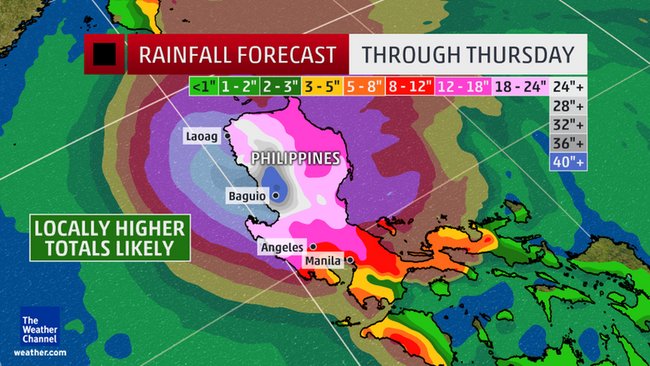 With outer rainbands already wrapping into parts of Luzon, and some lingering bands potentially persisting on the south side of the circulation as late as Wednesday, Luzon could be looking at up to 6 days of heavy rainfall from Koppu/Lando before what’s left of it finally drifts farther north.

With rain rates in tropical cyclones typically in excess of 2 inches per hour and additional lift for the moist air provided by Luzon’s mountainous terrain, extreme storm totals of 20 to 40 inches (500 to 1,000 millimeters) are likely across much of northern Luzon.

Locally higher amounts are expected, particularly in parts of northwestern Luzon where westerly winds point directly into the north-south mountain ranges paralleling the coast. One city particularly prone to extreme rainfall in this type of scenario is Baguio, which received more than 2,200 millimeters (87 inches) of rain in four days from a tropical cyclone in 1911.

Astronomical as that figure may sound, recent forecasts from two of the world’s best-performing computer models – the American GFS and the European ECMWF models – have predicted peak rainfall totals far exceeding 50 inches (1,270 millimeters) in the mountains lining the northwestern coast of Luzon.

If Kuppo/Lando should stall or move along a path that keeps onshore winds blowing in the same direction for a long enough time, highly localized rainfall amounts topping 2,000 millimeters (nearly 80 inches) would not be unrealistic.

To put this in perspective, these rainfall totals would be on par with the average annual rainfall in Miami, Florida (61.92 inches) and could more than double the peak total from the recent South Carolina flood event. All in the span of a few days.

Even in the typhoon-prone Philippines, rainfall amounts exceeding 40 inches (1,000 mm) from a single typhoon are relatively rare, and always extremely dangerous. Far lower rainfall amounts from past typhoons have proven deadly time and again.

Forecasters continue to discuss the possibility of rapid intensification as typhoon Koppu (or typhoon Lando) approaches landfall over the coming hours. Should that happen, with the worst case being a super typhoon Koppu emerging, the coastal areas near landfall could be devastated and any storm surge could be much higher than currently forecast.

The Philippines is a country with low insurance penetration, meaning that any impact to the reinsurance market, or potentially to insurance-linked securities (ILS) players, would be minimal from this typhoon.

Typhoon Haiyan which devastated parts of the Philippines in November 2013 caused an economic loss of around $13 billion, while less than a billion was actually paid for by insurance, demonstrating the significant insurance protection gap in the country.

Of course the Philippines is actively exploring putting in place a catastrophe bond for its peak catastrophe risks, with the help of the World Bank, as well as parametric or index-insurance for extreme rainfall. Both would be at risk due to Koppu if in place at this time and would provide disaster risk financing to assist with reconstruction after events of this magnitude.

As typhoon Koppu (or typhoon Lando) approaches the Philippines the graphics on this page and the interactive wind map below will update as new data becomes available.

An update from risk modelling firm AIR Worldwide can be found below:

BOSTON, Oct. 16, 2015 – According to catastrophe modeling firm AIR, intensifying and slowing as it tracks toward the northern Philippines, Typhoon Koppu brings the threat of high winds, storm surge, and torrential rainfall to the island of Luzon this weekend. Widespread rainfall of 300-600 millimeters (12-24 inches) could result from the powerful, slow-moving storm—as much as 900 millimeters (36 inches) in some areas—with the possibility of dangerous and potentially life-threatening flooding and mudslides, notably in the mountainous areas of northern Luzon. Flash flooding is likely, and the high water in streams and rivers could wash out roads and bridges in heavily impacted areas. Given that insurance penetration is typically no more than 10% to 20%, insured losses are not expected to be significant as a result of this event.

“Typhoon Koppu (also known as Lando) is expected to make landfall Saturday night, October 17, local time (Saturday afternoon UTC) at near Category 4 strength, and the storm could take as long as two days before entering the South China Sea,” said Christopher Bednarczyk, scientist at AIR Worldwide. “Although intensity and storm track remain in question, during the next week Taiwan, Japan’s Ryukyu islands, and eastern China—including densely populated Hong Kong— could be impacted by Koppu, even if the storm turns sharply north after leaving the Philippines.”

In recent years the Philippines has experienced a number of powerful storms, including Super Typhoon Noul in May 2015 and devastating Typhoon Haiyan in November 2013, which generated storm surge to 5 meters (16 feet) and killed upwards of 6,000.

Bednarczyk continued, “Typhoon Koppu formed as a tropical depression east of Guam and tracked westward over the last several days, gradually gaining intensity while battling moderate vertical wind shear. Koppu became a tropical storm on October 13 and a typhoon on October 15 as it entered an area of high sea surface temperatures (SSTs) and ocean heat content east of the Philippines. Currently Koppu’s center is positioned about 300 km (200 miles) off the Philippine island of Luzon, with an intensity equivalent to a Category 2 hurricane on the Saffir-Simpson scale. The storm started to slow as it neared the Philippines and is forecast to move slowly westward and make landfall Saturday night local time in Aurora or Isabela province of the Philippines.”

“Typhoon Koppu remains in an area of high SST, and vertical wind shear has relaxed, which should allow for further intensification in the near term just before landfall. The Japan Meteorological Agency (JMA) is forecasting maximum sustained winds at landfall at approximately 180 km/h (112 mph), equivalent to a high-end Category 3/low-end Category 4 hurricane. (JMA uses a 10-minute averaging period, whereas the Saffir-Simpson scale is based on 1-minute winds, thus 180 km/h from JMA would convert to approximately 200-210 km/h in 1-minute winds.)”

As the subtropical ridge to the north weakens in the next few days, Koppu is expected to begin a turn to the north. However, model guidance differs on its track after departing the Philippines. Some solutions predict recurvature out to sea, while others forecast movement toward Taiwan.

Bednarczyk noted, “Due to the slow movement of Typhoon Koppu, its impacts on the Philippines will occur over a number of days. Rainfall will be heavy, and many locations in northern Luzon will likely see accumulation of more than 600 mm (24 inches), contributing to flooding and landslides. The capital Manila will avoid the worst of the storm, but it will likely still see some heavy rainfall.”

As of 11:00 p.m. local time (15:00 UTC) Friday, October 16, the Philippine Atmospheric, Geophysical, and Astronomical Services Administration (PAGASA) had issued Public Storm Warning Signal (PSWS) #3 (winds of 121-170 km/h, 76-106 mph) for Northern Aurora, Isabela, and Quirino provinces. PSWS #2 (winds of 61-120 km/h, 38-75 mph) already had been issued for the rest of Aurora Province and all other provinces in the Cagayan Valley, Cordillera, and Ilocos regions of northern Luzon, including the Cagayan and Babuyan Islands.

In anticipation of dangerous conditions resulting from this long-duration storm, the military and emergency workers have been put on alert by the Philippine National Disaster Risk Reduction and Management Council. Also, UNICEF Philippines reportedly has stockpiled supplies for 12,000 families in the areas of greatest risk.

According to AIR, in the Philippines, lighter materials—such as wood frame with galvanized iron or aluminum roofs—are often used for residential buildings in rural areas. In contrast, urban residential structures are generally made of concrete block with metal roofs, although hollow concrete is also used. Masonry residences and high-rise apartments of steel construction can also be found in the cities. Building codes are not strictly enforced.

Structural damage is not expected for engineered structures, although well-constructed engineered buildings could have some damage to roofing and siding, especially to windward corners, rakes, and eaves.

According to AIR, buildings will respond differently to wind loads, depending upon their construction, height, and occupancy. The duration of damaging winds will also impact potential losses. Strong winds may peel back or blow off galvanized iron roofs and down trees and wooden utility poles, exposing live wires and causing power outages.

Landslides, storm surge, flash floods, and lahar (flows of mud and debris) could cause significant water and structural damage. Flood is much more damaging to the lower floors of multi-story buildings, making the commercial establishments on the first floor of many apartment buildings in the Philippines vulnerable to the flood conditions expected from Typhoon Koppu.

Typhoon and flood damage are usually covered together in the Philippines and are offered under separate fire policies with named perils extensions.