Typhoon Halong, no longer a super typhoon having weakened a little, is now a category 1 equivalent typhoon with sustained winds of around 85mph and gusts of 105mph but threatens Japan with a direct hit of winds, torrential rains, floods and a storm surge.

Typhoon Halong is making its final approach towards a category 1 landfall on Shikoku, with maximum sustained winds expected to be in the region of 80mph to 90mph and gusts of up to 125mph.

Already thousands of homes are reported to be without power on Kyushu, the southernmost of the main Japanese islands, as typhoon Halong makes its presence felt in advance of landfall. Heavy torrential rains are affecting southern Japan, with some areas already seeing around 80mm of rainfall per hour. The forecast calls for local rainfall totals of up to 700mm in Shikoku, with isolated amounts of up to 1000mm, around 40 inches.

With rainfall forecast at such high levels flooding and the inevitable landslides from such high levels of rain are key concerns for typhoon Halong. Flood insurance penetration is however not that high, as typically flood coverage is an add-on to a homeowners policy.

With such high rainfall levels in advance of Halong, the region has seen extreme rainfall in the previous week as well, the flood concern for Japan is high. Storm surge on the coast is not expected to be such a major issue, with a surge of around 1 metre expected at this time.

Winds will be high enough to cause damage to the buildings of wooden construction but not to more modern industrial complexes it is thought. However with such high rainfall levels there is a chance of some business interruption from the storm and potential flooding for any industrial or commercial complex in typhoon Halong’s path.

According to catastrophe modeling firm AIR Worldwide, Typhoon Halong is currently moving to the north at a speed of 15 km/h and is expected to make landfall in western Shikoku late Saturday night local time. The storm has a central pressure of 950 mb and maximum sustained winds of approximately 139 km/h. Halong is expected to maintain this intensity through landfall and then quickly deteriorate as it moves northward over the cooler waters of the Russian Maritime Territory.

Dr. Hill observed, “The mainland of Japan has already begun to experience Halong’s effects, as Kyushu and Shikoku received more than 50 mm of rain, with 50-100 mm of rain occurring in just a 6-hour time period near Kochi. Conditions will continue to deteriorate across Kyushu, Shikoku, and western Honshu through Saturday evening as the rain and winds pick up in intensity.”

Wind gusts between 95 km/h and 130 km/h are expected to be widespread in the vicinity of the storm’s landfall location with destructive wind gusts between 130 km/h and 160 km/h possible on the southern coasts of Shikoku and western Honshu (in the vicinity of Fukuyama and Okayama). Rainfall totals in locations across Shikoku could top 500 mm. Such torrential rain heightens the risk of severe flooding and landslides with recent heavy rain from tropical storm Nakri exacerbating the danger. Residents are being warned to stay on high alert for the threat of landslides and to evacuate as early as possible when advised to do so by local officials.

Conditions farther away in Tokyo will be quite a bit milder, with only 25-50 mm of rain expected and wind gusts of 80 km/h.

According to AIR, the majority of the residential buildings in Kyushu and Shikoku consist mostly of wood-frame construction. At the expected wind speed levels, these structures may experience moderate to high cladding and roofing damage. For engineered buildings, such as reinforced concrete and steel buildings, expected structural damage is very low to none. Commercial building cladding and roof coverings could experience moderate levels of damage.

According to AIR, the vulnerability of buildings to flood damage varies by construction type. For a given flood depth, a residential wood-frame building is expected to sustain more damage than a residential masonry building. Concrete construction is less vulnerable to flood than steel or masonry. Commercial and apartment buildings usually have stronger foundations than residential buildings, and are thus better able to resist flood loads.

Flood insurance does not exist as a standalone policy in Japan. Instead, property owners can opt to purchase flood coverage as part of a standard fire insurance policy. In typical Japanese flood policy coverage, a specified payout is made only when actual damage falls within a specified range of loss.

Typhoon Halong weakened a little on Thursday but is currently forecast to intensify a little before landfall and may regain category 2 status, with one minute sustained winds of nearer 95mph to 100mph, sufficient to result in some structural damage.

Rainfall remains a real concern, with typhoon Halong expected to bring localised flooding due to heavy rainfall occurring in a region of Japan which has already been inundated in recent weeks. Halong is forecast to drop 3 to 5 inches of rain over a widespread area with local amounts of as much as 8 or 10 inches possible as well. Flooding could be a real concern for a large area of Japan with some areas in the storm’s path having seen as much as 50 inches of rainfall in August already according to Weather Underground. 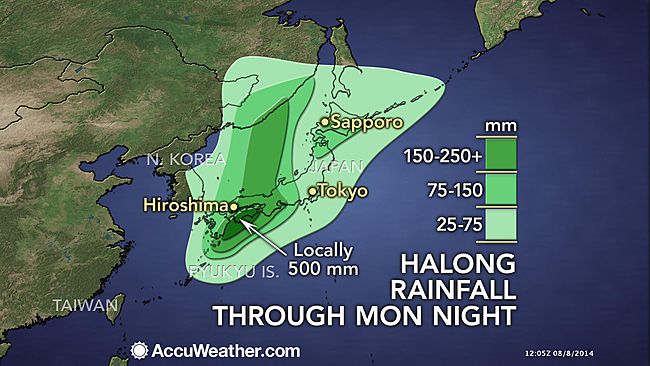 The storm surge forecast currently calls for anything around 1 metre to as much as 2.4 metres above normal levels. This surge has the potential to inundate coastal areas and exacerbate any coastal flooding caused by the abnormally high levels of rain experienced in the region lately.

The Tokyo area is expected to avoid the worst of typhoon Halong, with forecasts suggesting around 2 inches of rain and 50mph winds for the region. That should keep the eventual insurance industry impact down, but areas such as Fukuyama and Okayama are in Halong’s path and will feel the brunt of the storms winds, with any further strengthening likely to increased insurance losses, possibly dramatically, here.

Typhoon Halong remains a remote risk for the Japan typhoon exposed catastrophe bonds which are currently in the market. However, at least two Japan typhoon cat bonds also cover losses from both storm surge and flooding associated with typhoon events (Aozora Re Ltd. (Series 2014-1) & Akibare II Ltd.), so should Halong’s track move more towards Tokyo and the surrounding area the risk to those bonds would grow.

As the forecast is right now the chances of an impact to cat bonds remains minimal. However the exposure for any collateralized underwriters of Japanese typhoon risks will be a factor, with a number of ILS fund managers participating in large Japanese catastrophe reinsurance programmes on a collateralized basis. So there certainly is an exposure for the ILS market, as there is to the majority of major catastrophe events these days with the increased focus on collateralized reinsurance.

We will update you further should the forecast for typhoon Halong show more rapid intensification or should the track move more towards the peak exposures in Japan around the Tokyo area.