Typhoon Goni is now heading towards what is forecast to be a Category 2 or 3 hit on Kyushu, Japan, putting insurance exposures in cities such as Nagasaki at risk and potentially exposing reinsurance contracts, as well as two catastrophe bonds, Akibare II and Aozora Re.

Typhoon Goni, (the Korean word for Swan) has been traversing the Pacific for 10 days now, battering the northern Philippines and Japanese islands on its path. Goni originally looked as if it would strike Taiwan, but the forecast saw the storm turn early and run along the Japanese Ryukyu islands and make a beeline for Kyushu.

Kyushu has a relatively high insurance penetration rate in its cities and there will be some exposure for reinsurance contracts and also potentially for catastrophe bonds, or collateralized reinsurance, if Goni made a direct hit at Cat 3.

Currently typhoon Goni is situated to the southwest of Kyushu, packing 125mph sustained winds with gusts of 155mph. Moving northeastwards at around 24mph, typhoon Goni is expected to reach Kyushu on Tuesday morning still as a Category 3 typhoon, with winds of 115mph and upwards. At landfall the current forecast is for the eye of Goni to be a strong Cat 2, sufficient for damage to be caused to structures. 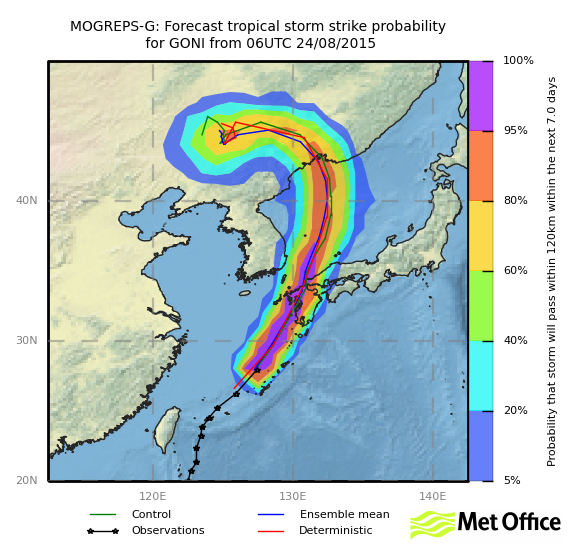 Goni is not facing much in the way of wind shear between its current position and the Japanese island of Kyushu and the sea surface temperatures remain sufficient for the typhoon to maintain its intensity forecast.

At the moment, the forecast models show typhoon Goni heading for Nagasaki, a major city in the southwestern corner of Kyushu. On its current path cities such as Fukuoka could also be impacted by Goni as it crosses the island of Kyushu.

These are both major cities, with significant insured value at risk. Should Goni make a very close landfall to Nagasaki as a Cat 3 or strong Cat 2 typhoon there could be a relatively large insurance industry exposure. Any resulting impact to reinsurance firms, collateralized reinsurance placed by ILS funds and managers, or even catastrophe bonds would depend on the specific level of impact.

Goni is expected to pose a flooding threat, with as much as 8 inches of rain forecast. After striking Japan, Goni will cross Kyushu and head for south Korea where again rainfall could cause a flooding issue.

The cat bonds which have exposure to Japanese typhoon impacts are typically aimed at covering major storm losses and have their exposure concentrated on cities further north in Japan, such as Tokyo, Osaka and Kyoto.

The two catastrophe bonds which are currently in-force, and so exposed to the approaching typhoon Goni, are Mitsui Sumitomo’s 2012 issuance the $130m Akibare II Ltd. and Sompo Japan and Nipponkoa Insurance Company’s 2014 transaction, the $100m Aozora Re Ltd.

These two cat bonds have quite different structures making them difficult to compare. Akibare II uses a modelled loss trigger, based on actual parameters of the storm which are run through a post event loss calculation process to define an event percentage. The Akibare II cat bond covers both wind and flood losses from typhoon’s as well. Meanwhile Aozora Re is an indemnity bond covering wind, rain, flood and storm surge related losses suffered by the sponsor from Japanese typhoon events.

While these two cat bonds should be considered exposed to Goni, perhaps particularly the Akibare II transaction which has a concentration of exposure in Fukuoka, on Kyushu island, it really would take a worst case scenario landfall in the region for the threat to manifest itself.

Aozora Re is relatively remote risk, requiring a very large and powerful typhoon impact, probably around the Tokyo and Kanagawa region to worry it. Meanwhile Akibare II, while a more risky cat bond, would still likely require a particularly heavy impact to be threatened.

Overall the contribution to expected losses from exposures on Kyushu island for these cat bonds is much lower than for other regions further north. However, the forecast track does take Goni very close to some of the larger cities on the island, making this a storm to watch.

As is typical, the potential for any loss as a result of typhoon Goni is likely higher for collateralized reinsurance contracts covering Japanese typhoon risks. As ILS funds and managers increasingly participate in traditional reinsurance renewals, but on a fully-collateralized basis, they are often taking on exposure to layers of risk much lower than where cat bonds typically attach.

Japanese typhoons remain one of the major catastrophe exposures of the reinsurance and ILS market, making every storm worth tracking. Goni, due to its forecast path, is perhaps worth tracking more than some.

The maps and images on this page will be updated automatically as typhoon Goni approaches Japan.

Satellite image of typhoon Goni as it approaches Kyushu, Japan