The Texas Windstorm Insurance Association (TWIA) is set to procure a new $1.4 billion layer of reinsurance and catastrophe bonds in 2018, taking its overall private market program to $2.6 billion, a 24% increase from the size of its program a year ago, helping to cover a funding gap created by increasing hurricane Harvey losses.

As we wrote yesterday, TWIA is back in the market with its fourth catastrophe bond issuance, a $300 million Alamo Re 2018-1 transaction.

The cat bond is set to occupy part of a $1.4 billion layer of private market reinsurance, alongside traditional and collateralized markets that may participate, but overall TWIA is going to have a larger contribution to its funding from reinsurance capacity, after hurricane Harvey completely eroded the insurers Catastrophe Reserve Trust Fund and other sources of finance.

The size of the loss from Harvey is expected to grow now, with the latest estimate from TWIA being for a $1.61 billion loss.

That’s sufficient to fully erode TWIA’s Catastrophe Reserve Trust Fund (CRTF), a type of buffer account held by the containing net gains from prior years that sat at the bottom of the insurers financial protection and reinsurance tower, as well as a portion of TWIA’s Class 1 public securities and some of the funding raised by Class 1 assessments on members.

The result is that TWIA has significantly less traditional financing available this year, meaning it needs significantly more reinsurance to replenish its funding tower.

In 2017, TWIA’s private market reinsurance sat atop $2.8 billion of funding from the CRTF, public securities and assessments.

In 2018, after the impact of hurricane Harvey, TWIA’s private market reinsurance coverage will now kick in at $2 billion of losses, making that lower layer a much riskier prospect this year.

The lower layer of the reinsurance tower, that attaches at $2 billion and covers losses up to $2.8 billion, is to be occupied by the $400 million of second season reinsurance coverage that TWIA bought in 2017 and has now been activated by the impact of hurricane Harvey, as well as the $400 million Alamo Re Ltd. (Series 2017-1) cat bond transaction which has been reset with a much lower attachment point (so increasing the risk for these notes).

Above that, attaching at $2.8 billion, is the new layer which will be occupied by a combination of the new Alamo Re 2018-1 cat bond, as well as traditional or collateralized reinsurance. This layer spans $1.4 billion, so exhausting at $4.2 billion of losses.

Above that, attaching at $4.2 billion of losses to TWIA is the $400 million Class B tranche of the Alamo Re Ltd. (Series 2015-1) catastrophe bond, which has had its attachment point lowered slightly as well.

The program still provides TWIA with funding to protect it against a 1-in-100 year hurricane and thanks to depopulation the level of loss a 100 year event represents has declined to $3.9 billion.

So with the combination of reinsurance and cat bonds taking the total funding tower to $4.6 billion, TWIA remains in good shape to handle a  major hurricane event this year.

The enlarged program could mean TWIA has more room to upsize on its new catastrophe bond as well, which would please ILS investors who are keen for more risk right now.

TWIA’s reliance on reinsurance markets is set to increase this year, but the work of recent renewals and the expansion into catastrophe bonds will all help the residual market insurer to keep its pricing as low as possible, while remaining fully-funded for the 100 year hurricane event.

TWIA’s proposed reinsurance tower for 2018 can be seen below: 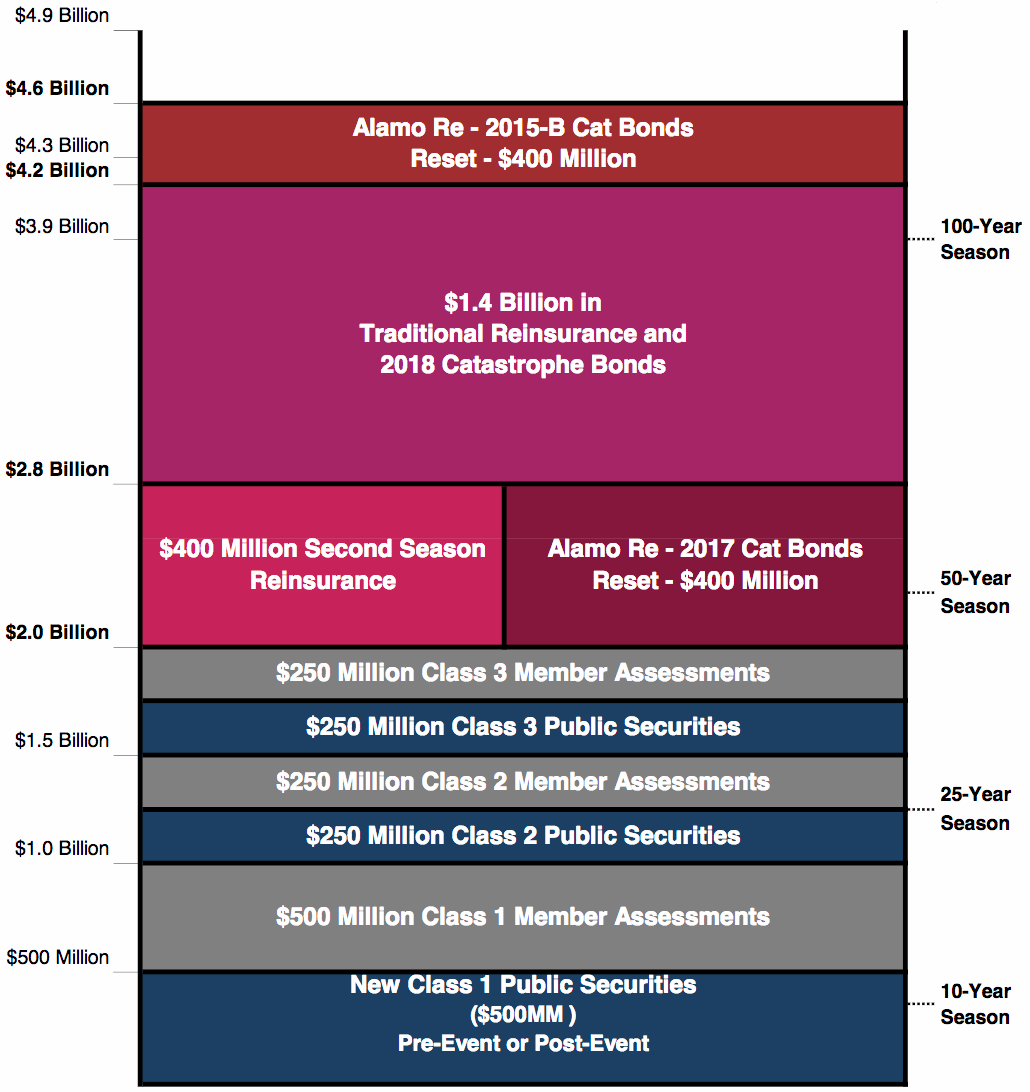