In renewing its $2.1 billion reinsurance and catastrophe bond program for 2020, the Texas Windstorm Insurance Association (TWIA) paid some 19% more in terms of overall rate-on-line (ROL) compared to the prior year.

The residual market insurer for the state of Texas had locked in long-term reinsurance protection with a new $400 million Alamo Re II Pte. Ltd. (Series 2020-1) catastrophe bond issuance in advance of its June renewals, to which it then needed to add $1.1 billion of fresh reinsurance from traditional and other markets, including ILS funds, or collateralised players.

Having secured that, taking its overall funding for the 2020 hurricane season to $4.2 billion including its Catastrophe Reserve Trust Fund, member assessments on insurers and pre or post-event debt funding sources, TWIA is as well protected for the year as it was in 2019, but at much higher cost.

At a governing board meeting last week, TWIA executives revealed that the gross cost of its 2020 reinsurance program was $107.5 million, much higher than the budgeted cost of $93.1 million.

As well as its new catastrophe bond and the $1.1 billion of renewed reinsurance limit, TWIA also benefits from continued coverage from two older cat bonds which will have helped it keep the costs down somewhat, given these multi-year instruments were issued before the recent firming of rates. 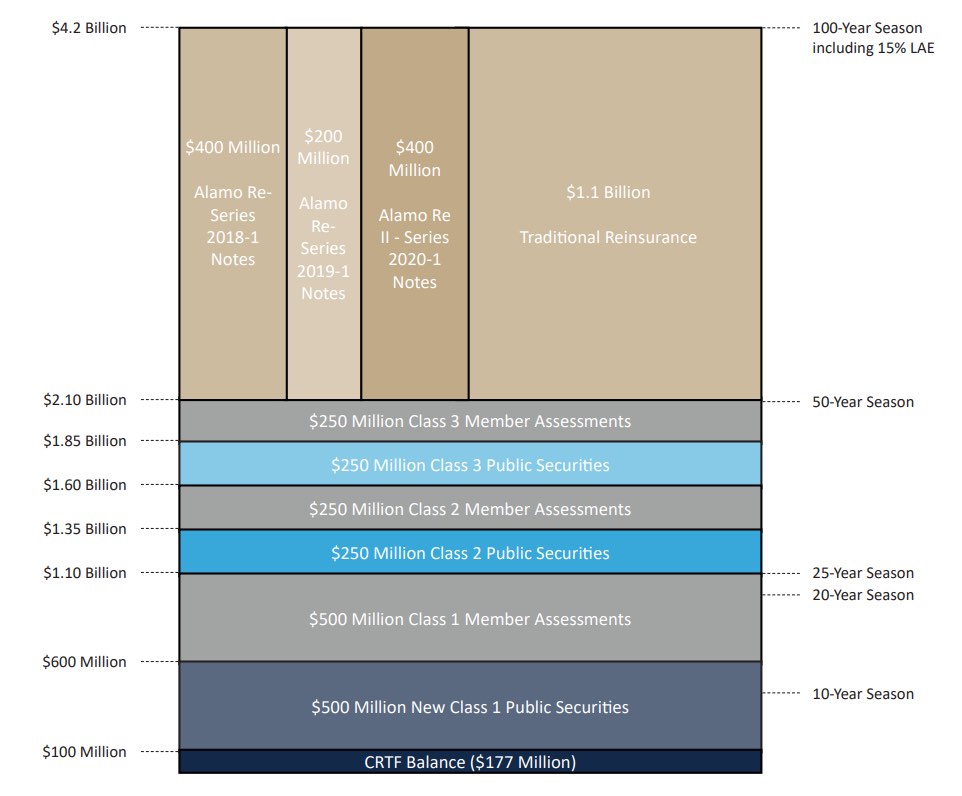 Adding to this $4.2 billion reinsurance tower, TWIA said that it has also secured a $500 million line of credit from J.P. Morgan and Bank of America, which is designed to provide immediate liquidity, if needed, should TWIA have to access the statutory funding layers of the tower after a catastrophic hurricane that struck its coverage area along the Texas Gulf coast.

TWIA’s $2.1 billion annual aggregate reinsurance and cat bond program, sitting on-top of its other funding sources, means the insurer is covered for 1-in-100 year storms, which is a mandated funding level for the organisation.

Challenges may come should the funding be severely eroded by a hurricane this year, as replenishing the reinsurance and cat bond aspects of the tower may come with even higher costs.