The Texas Windstorm Insurance Association (TWIA) has raised its target for reinsurance and catastrophe bond coverage for this year to $2.1 billion, while at the same time the expectations for average rate-on-line have fallen slightly since December. 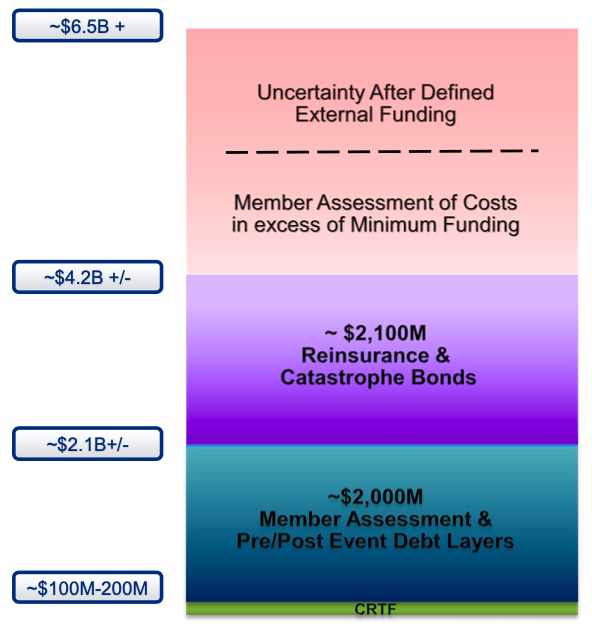 Back in December 2019, TWIA’s Board was working off a budgeted assumption that it would require $1.88 billion of reinsurance limit in 2020, split across traditional property catastrophe reinsurance and its catastrophe bonds, but at higher rates than in 2019 as the insurer anticipated paying more for its 2020 renewal.

As we explained at the time, TWIA budgeted for the $1.8 billion of reinsurance and cat bond backed limit to attach at $2.2 billion and was expecting an increase of around 15% in the rate on line (premium/limit), from 4.3% to 4.95% for the overall 2020 reinsurance program.

A few months have now passed and at yesterday’s TWIA Board meeting, the insurer lifted its target for 2020 reinsurance and catastrophe bond coverage to $2.1 billion, while the expected rate-on-line is now anticipated to fall somewhere in between 4.25% and 4.5%.

TWIA’s Board resolved yesterday to continue to use a blended approach when it comes to catastrophe modelling and setting its reinsurance purchasing needs, working off the near-term output of the models and taking an average of the two (AIR and RMS).

The goal is to again cover TWIA for losses up to a 1-in-100 year probable maximum loss hurricane event and for the 2020 catastrophe year that 1-in-100 loss level means requiring coverage up to $4.2 billion, including loss adjustment expenses.

With overall exposure in TWIA’s portfolio down and the Catastrophe Reserve Trust Fund (CRTF) funded up to $100 million to $200 million, on top of which sits around $2 billion of member assessments and pre or post-event debt funding sources, the attachment point for the 2020 catastrophe reinsurance program is set at around $2.1 billion (see graphic above).

So TWIA requires a program of around $2.1 billion to bring its funding up to the $4.2 billion level, and the Board directed TWIA staff and their broker Guy Carpenter to place a combination of catastrophe bonds and traditional reinsurance covering an aggregate amount of $2.1 billion for the 2020 wind season.

TWIA is still budgeting for around $93 million of reinsurance costs in 2020, although the final bill will be defined by the mix of coverage sources it selects this year.

TWIA has long been a user of catastrophe bonds as part of its core catastrophe reinsurance program.

In 2019, TWIA secured a $2.1 billion reinsurance and catastrophe bond program for the hurricane season.

This suggests we will see TWIA back in the market with a fresh catastrophe bond issue during the second quarter of the year, perhaps even sooner if the insurer wants to get out early to the investor base.

The capital markets tend to make up anywhere between 40% and 60% of the overall reinsurance program for TWIA, so cat bond investors will be hoping to see that maturing Alamo Re 2017 transaction fully renewed, or perhaps even upsized.

As ever though, the mix of sources of reinsurance will depend a lot on price, so can change on a year-to-year basis depending on market conditions for the insurers renewal.