The Texas Windstorm Insurance Association (TWIA) has further demonstrated its commitment to the catastrophe bond market at its 2021 reinsurance renewal, with multi-year coverage from the capital markets now making up 57% of its $1.93 billion program tower.

As we’ve been reporting over recent weeks, TWIA successfully doubled in size its new Alamo Re Ltd. (Series 2021-1) catastrophe bond transaction as part of this year’s reinsurance renewal.

That new Alamo Re cat bond deal began life at $250 million in size, but by close it had grown to provide the insurer $500 million of three-year annual aggregate and indemnity triggered reinsurance protection, covering losses from named storms and severe thunderstorms in Texas.

The renewed reinsurance tower for TWIA means that the new cat bond attaches at $2.1 billion of losses and covers a share of the private market protection up to $4.03 billion initially.

This is shared with a newly secured $830 million slice of traditional reinsurance, as well as TWIA’s remaining in-force $600 million of cat bonds from previous year’s issuances.

You can see TWIA’s reinsurance program layer chart below. 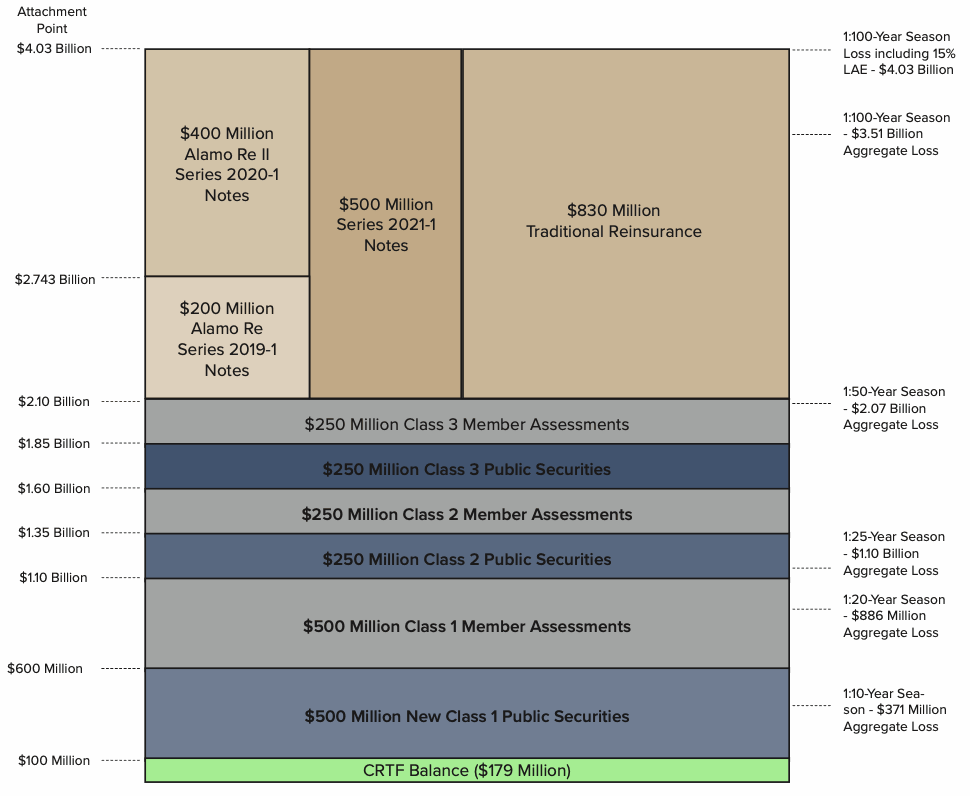 That will benefit TWIA as it goes into future reinsurance renewals, as the multi-year and staggered nature will likely make it more cost-efficient over the long-term.

All of TWIA’s reinsurance tower provides aggregate protection, meaning the insurer is covered should multiple storms strike Texas this year.

The insurer commented, “TWIA will begin another hurricane season in a strong financial position with access to $4.03 billion secured for the 2021 storm season. To meet the Association’s statutory funding requirement to respond to a 1-in-100-year storm season, the funding includes $1.9 billion in reinsurance attaching above the $2.1 billion in statutory funding sources.”

Of course, this year TWIA’s program could have been much larger, as the insurers’ staff had deliberated over buying an additional almost $1 billion of protection.

That would have included another catastrophe bond, as TWIA was targeting to continue mixing traditional and alternative reinsurance sources in the additional layer, if it had been procured.

But TWIA’s Board ended up voting against securing the additional protection, deciding that taking its funding up above the 1-in-100 year statutory level and asking insurers in Texas to pay member assessments for it was unnecessary.

Read all about every catastrophe bond TWIA has ever sponsored in our Deal Directory.