Members of the Board of the Texas Windstorm Insurance Association (TWIA) expressed concerns over the potential cost of catastrophe bond coverage in 2023, having an expiring $400 million cat bond it wants to renew as part of a target to buy up to $2.92 billion of reinsurance for the coming storm season. 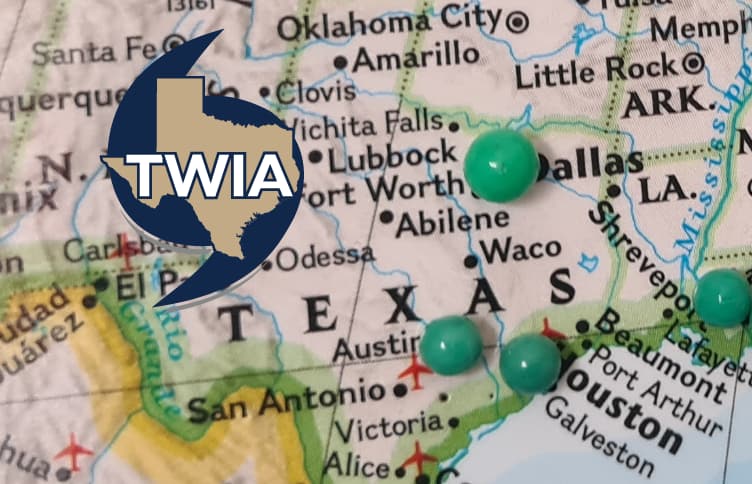 TWIA’s Board met yesterday to discuss the proposal its Actuarial & Underwriting Committee had made last week.

As we reported at the time, the TWIA Actuarial & Underwriting Committee developed a recommendation to take to the Board, that would drive its minimum statutory funding (and risk transfer needs) for the year ahead.

To summarise, the Committee recommended that only the AIR and RMS risk models be taken into account for setting the TWIA PML, with a 50% – 50% weighting for each and a long-term view of risk be used.

Based on a suggested retention of $2.28 billion, slightly higher than its 2022 retention, that PML meant TWIA would be seeking just over $2.964 billion of reinsurance limit for 2023, made up of in-force and any renewed catastrophe bonds, plus a new traditional reinsurance buy.

But, at the TWIA Board meeting yesterday, a motion was passed that differed slightly to the Committee’s recommendation.

That motion stated that TWIA will set its 1-in-100 year probable maximum loss (PML) lower, using the RMS model and based on a long-term assumption, which would be $3.9 billion, but then adding 15% for loss adjustment expenses (LAE).

Which would equal a PML of roughly $4.5 billion, including LAE. This figure helps to establish the minimum amount of capital and risk transfer required for the coming 2023 hurricane season.

But, the motion also stated that TWIA will instruct its reinsurance broker Gallagher Re to go to market and get bids on purchasing up to the previous $5.2 billion PML level, but to come back with detail on what each level would cost, so the PML + LAE amount required, and the top $5.2 billion amount of claims paying capacity.

Under the RMS PML of $3.9 billion plus 15% for LAE, so roughly $4.5 billion, and based on the previous stated retention target of $2.28 billion of statutory capital, that would mean TWIA needs to secure a minimum of $2.205 billion of reinsurance and cat bond coverage to run through 2023, so around $760 million less than if it bought up to the $5.2 billion level where it requires the $2.92 billion.

So, while $2.92 billion has been stated as the target, the Board will consider cost and now has a minimum based on the 1-in-100 PML that it can buy down to, if price becomes an issue.

Interestingly, TWIA’s Board also stated that it could aim to pass on some of the reinsurance costs, as this year’s buy could come in well-above prior year spends, which was around $102 million in 2022 (no budget has been disclosed for 2023 yet).

TWIA said that the roughly $700 million of reinsurance above the PML would be paid for through assessments on member insurers. Interestingly, the Board also mentioned passing on rate to policyholders as well, but it seems this would be a less desirable approach.

The motion was passed by 4 votes to 3, as a split Board was far from in agreement on the way forward.

Causing much of the disagreement appears to be the understanding that reinsurance and cat bonds will cost TWIA significantly more in 2023, so affordability is going to be a key issue and passing on costs to insurers or policyholders still viewed as a contentious approach by some.

Helping TWIA with its reinsurance arrangements for 2023 is the fact it has multi-year cat bond coverage in place as well.

There are $1.1 billion of Alamo Re catastrophe bonds in-force, but a $400 million piece of that is slated to mature before the 2023 hurricane season.

As we reported in December 2022, TWIA’s Board had already agreed that its staff could bring forwards a renewal of that cat bond, hence a new Alamo Re is expected to hit the market in the first-quarter of 2023, giving the residual market insurer the option to bring another deal before the season begins if cat bond market conditions were conducive.

But a TWIA Board member is not so sure that the cat bond market will be priced at a level TWIA can afford, it seems.

Ron Walenta said, “I’m following quite closely what’s going on in interest rates and I’m not sure cat bonds are going to be an option for us.

“Simply because, the one year T-bill rate this morning was 4.7%. If I can get a risk free, guaranteed return of 4.7% and I think it’s going to go higher, why should I go a cat bond”

Walenta said that cat bonds issuers are going to need to pay a higher premium and added “I’m not sure it’s going to be a cost effective alternative for us.”

He went on to say that, as a result and if the cat bond market proves too expensive, TWIA could be “looking almost at 100% reinsurance, traditional reinsurance,” for its 2023 risk transfer buy.

This year’s renewals are going to be very interesting for organisations like TWIA, with affordability of reinsurance coverage, in whatever form, perhaps as challenging as it has ever been.

As TWIA’s exposure has been rapidly growing, the insurer of last resort needs reinsurance more than ever. But in a marketplace that’s as hard as we see today, it could be challenging to afford this without the use of some type of assessment to help fund risk transfer, in cat bond or reinsurance form.

While no budget for risk transfer has been disclosed yet, typically TWIA sets an amount it wants to spend, this is likely to come after initial quotes are received.

It’s going to be interesting to see how much the insurer can actually buy in 2023 and whether assessments will help it buy up to the PML, or to the higher stated goal of $2.92 billion of reinsurance and catastrophe bonds.

You can read about all of TWIA’s Alamo Re catastrophe bonds it has ever sponsored in the Artemis Deal Directory.