The insurance-linked securities (ILS) market is expected to continue to experience an upward trajectory next year, with growth in ILS allocations expected in 2021, according to investment manager Twelve Capital.

Following a period where some redemptions have been seen due to the impacts and volatility in capital markets from the COVID-19 pandemic, Twelve Capital expects investor appetite to resurge and allocations to ILS and other reinsurance-linked assets to move in a positive direction through the year-ahead.

Reinsurance demand has been seen to increase at recent rounds of renewals, Twelve Capital believes, while at the same time capacity, at least in some segments of the market, has been constrained.

The result has been ongoing improvement in the rating environment, driving significant strengthening in pricing, an “enhanced market dynamic” that the reinsurance and ILS fund manager believes will now persist through the year ahead.

On top of the fact rates are moving across reinsurance and retrocession, Twelve Capital also highlights the important fact that returns in ILS fund strategies are not only dictated by rates-on-line in reinsurance.

Importantly, Twelve notes that, “underlying terms and conditions are being tightened to the benefit of risk-adjusted returns.”

Adding that, “Multi- year contract terms and more complex features are being excluded in favour of more defensive occurrence structures with narrower geographical scope as well as more restrictive coverage. Pandemic exclusions are also being introduced to remove exposures similar to COVID-19.”

As a result of these market dynamics, which we also documented earlier today in this opinion piece, Twelve Capital is seeing rising spreads across the ILS market, in particular among peak peril private collateralised reinsurance and ILS deals.

Twelve Capital sees rates at a five-year high by this point, with risk-adjusted returns significant up on 2017, as the managers diagram below shows. 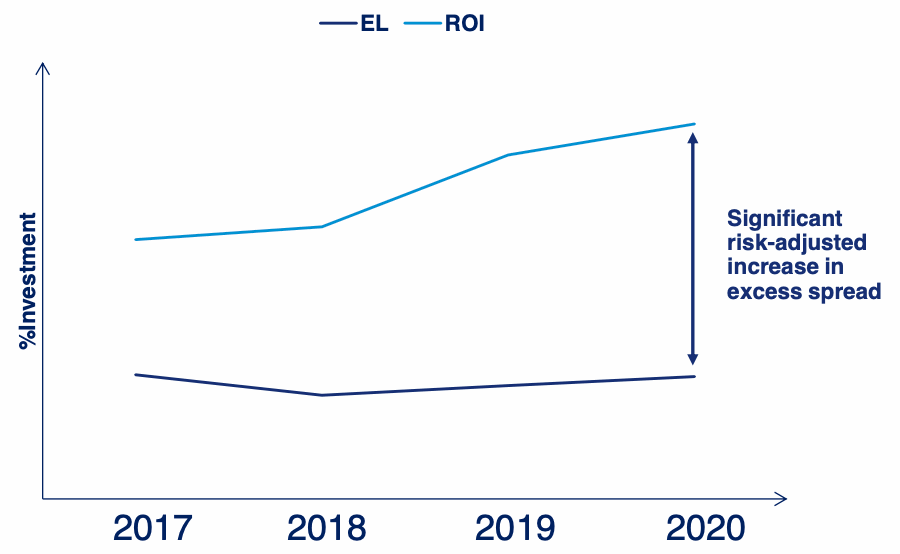 The diagram above shows the excess spread available from investments in peak peril private ILS contracts, an area Twelve Capital specialises in.

It displays the evolution of weighted average expected loss and return-on-investment for an indicative peak peril allocation.

Overall, the same dynamic of widening spreads has also been seen in the catastrophe bond market, with the average excess spread now back at its highest level since 2012, as our chart shows.

These higher levels of excess spread, above expected losses, suggest an ILS market with rising return potential for investors.

Twelve Capital believes this return potential is going to remain elevated for a time. Which we would suggest makes allocating to ILS at this point in the cycle an extremely attractive prospect for investors.