Tropical storm Nicole is nearing hurricane strength, having expanded again as it approaches Florida’s east coast, while hurricane warnings remain in effect for Florida, and the NHC continues to forecast the storm will become hurricane Nicole prior to making landfall.

Tropical storm Nicole has expanded significantly to carry a wind field that sees tropical storm force winds stretching some 740 km out from its center, especially to the north where the wind field extends furthest.

Tropical storm Nicole has intensified and now has maximum sustained winds of around 70 mph with higher gusts as it tracks towards the northern Bahamas.

Given the significant wind field of tropical storm Nicole, a hurricane or tropical storm of that size can still cause significant impacts over a particularly wide area, even at a low category, hence insurance, reinsurance and ILS market interests will be watching how things develop over the next few days very closely.

The latest NHC updates states that “Nicole is moving toward the west-southwest near 13 mph (20 km/h). A turn toward the west is expected today, followed by a turn toward the northwest on Thursday, and north or north-northeast on Friday. On the forecast track, the center of Nicole will approach the northwestern Bahamas this morning, move near or over those islands by midday, and approach the east coast of Florida within the hurricane warning area tonight. Nicole’s center is then expected to move across central and northern Florida into southern Georgia Thursday and Thursday night, and then across the Carolinas Friday and Friday night.”

As a tropical system, Nicole could now wrap up tighter and shrink the wind field a little. But still, this will be a very large storm, with wide-reaching effects likely to be felt across a significant area of the Florida peninsula as a result. 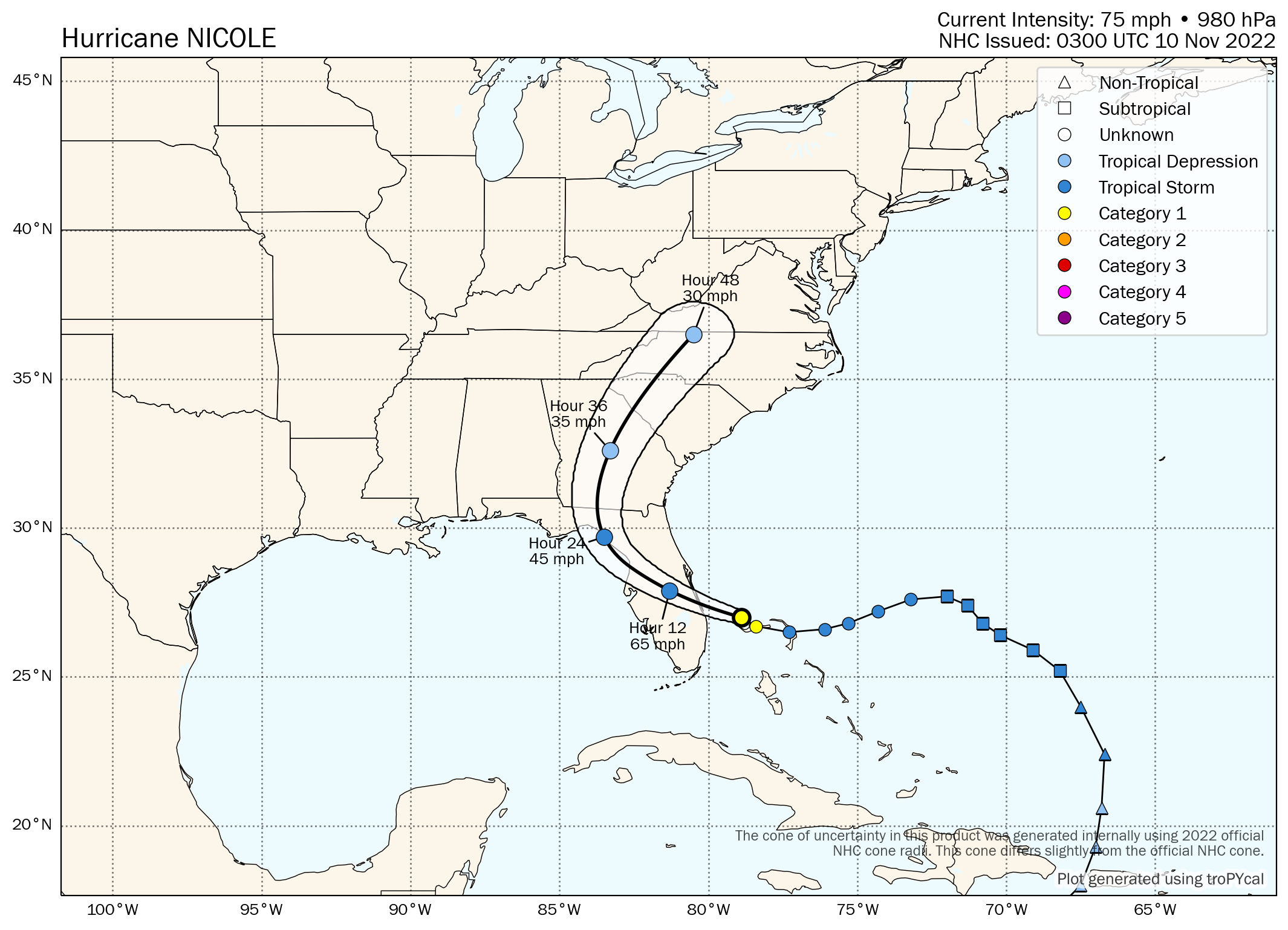 The NHC’s forecast cone can also be seen below. The latest update now shows hurricane Nicole forming a little further out towards the Bahamas, which could give more time for intensification as it approaches Florida: As you can see, the forecast continues to call for hurricane Nicole to be named as this storm intensifies on approach to Florida’s east coast.

The NHC says that “Some strengthening is expected today, and Nicole is forecast to become a hurricane near the northwestern Bahamas and remain a hurricane when it reaches the east coast of Florida tonight.”

Storm surge peaks are still forecast to reach 3 ft to 5 ft along the Florida east coast from North Palm Beach to Altamaha Sound including the St. Johns River to the Fuller Warren Bridge, while the Bahamas could see surge peak at 6 foot.

Rainfall totals from the storm are forecast to reach as much as 8 inches, ample for significant flooding.

With Nicole now a tropical storm, if it intensifies, even just to a low wind-speed Category 1 hurricane Nicole, these storm surge forecast may increase a little, and also spread more widely along Florida’s coast, while rainfall storm totals could also rise.

The prospect of a low hurricane strength, with a tropical storm wind field extending more than 610 km out from its center, could threaten a much more impactful coastal and inland flood event, while also meaning strong and potentially damaging winds reach a relatively significant area of Florida.

Meteorologists continue to talk about the slow-moving nature of storm Nicole as well, which could pile water up against the Florida coast across more than one tide cycle, exacerbating the coastal flood effects.

Nicole remains a reminder that the tropics can throw storm events in the direction of Florida’s peninsula even in November, something the insurance and reinsurance industry has become far less used to in recent years.