Tropical storm Fiona: Some uncertainty over potential for a US threat

Tropical storm Fiona has now formed in the Atlantic, the sixth named storm of this still relatively quiet 2022 hurricane season, with a path that will take the storm through the Caribbean islands, but some uncertainty in the cone over the eventual direction storm Fiona will choose to take.

The forecast models are not in agreement with tropical storm Fiona, with some taking her through the northeastern Caribbean island chain, but then turning north in a general path up through the Atlantic (perhaps something for Bermuda to keep an eye on).

But other forecast models show tropical storm Fiona taking a path towards the US coastline, so overall there is a particularly wide spread in the forecast ensembles and so great uncertainty for a few days more until Fiona takes a turn, or doesn’t.

Right now, tropical storm Fiona has 50 mph sustained winds with higher gusts and is churning forwards at 14 mph in the Atlantic, around 500 or 600 miles east of The Leeward Islands.

Tropical storm watches are in effect for many of the Caribbean islands, and some slow strengthening is forecast as possible.

The NHC says, “On the forecast track, the center of the storm is forecast to move through the Leeward Islands late Friday and Friday night, and be near the Virgin Islands and Puerto Rico this weekend.”

Tropical storm force winds extend out up to 140 miles from the centre of tropical storm Fiona, and its minimum central pressure is 1002 mb.

As a result, there’s a risk of flash flooding and mudslides for any regions that see the higher-end totals.

The GFS ensemble suggests no US threat from tropical storm Fiona, currently, but perhaps a storm for Bermudian insurance, reinsurance and insurance-linked securities (ILS) friends and contacts to watch out for.

Below is a GEPS ensemble plot, again from TropicalTidbits.com:

Which right now suggests a potential US eastern seaboard threat from this tropical storm, or perhaps hurricane should it intensify.

Here’s a GFS model run from TropicalTidbits.com showing a deeper and more intense likely hurricane Fiona sitting off the US coast, but still forecast to take the northerly and far offshore track. 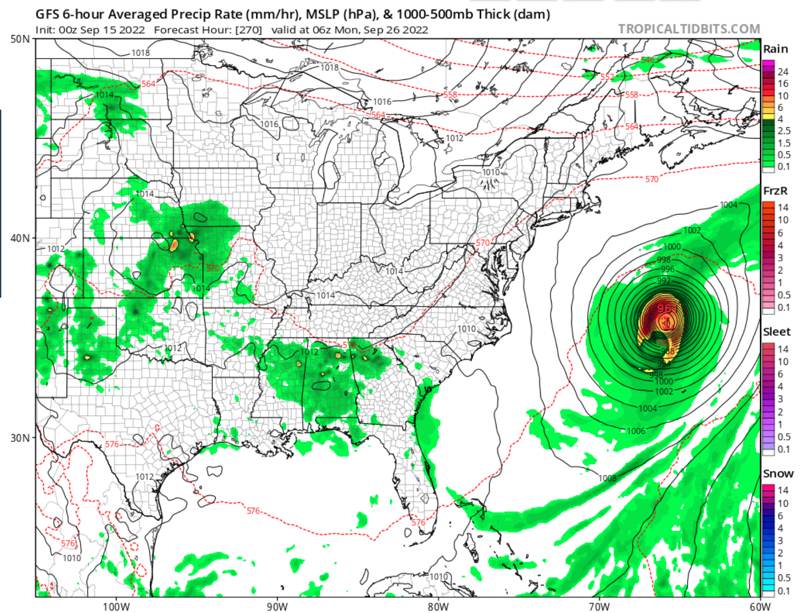 Finally and we’re not suggesting you trust this model, but it helps to show the extreme level of uncertainty in the forecast for tropical storm Fiona at this time. The CMC model from TropicalTidbits.com run shows storm Fiona meandering along the Caribbean island chain before intensifying offshore of southern Florida and perhaps dealing the state a glancing blow.

Again, we don’t suggest you immediately trust this CMC model run, but it’s a scenario to keep an eye on. 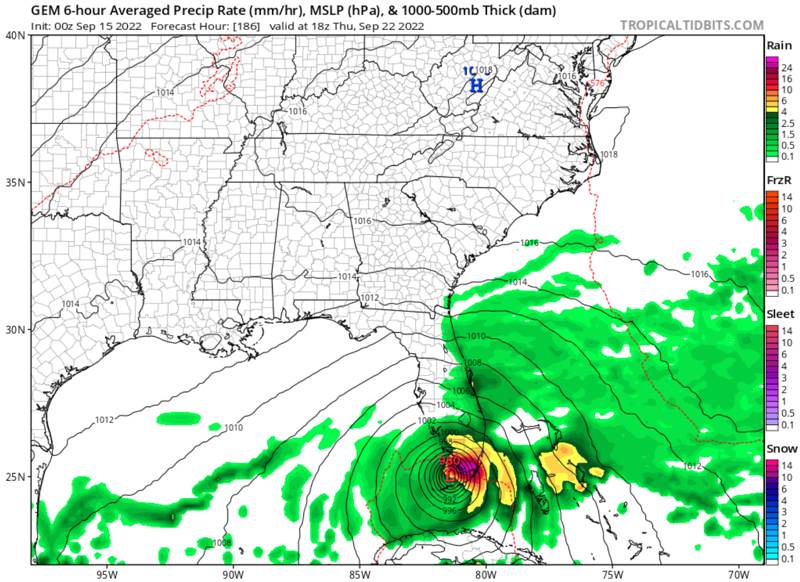 So, there’s a lot of uncertainty, but the model consensus continues to point towards the GFS scenario of tropical storm Fiona tracking northwards up the middle of the Atlantic, strengthening into a hurricane and coming relatively close to Bermuda (do keep an eye on this storm friends on the island).

The insurance, reinsurance and insurance-linked securities (ILS) community may need to watch tropical storm Fiona quite carefully over the next few days, to identify exactly what path the storm takes (critical) and if the path looks at all threatening then how intense it could become, if it achieves hurricane status.