The fifth named storm of the 2017 Atlantic Hurricane Season has formed today, with tropical storm Emily forming to the west of Tampa Bay in the Gulf of Mexico and now heading for a landfall on the Florida coast this afternoon.

Having formed only around 50 miles west of Tampa, Florida, there is not much time for tropical storm Emily to feed on the warm waters of the Gulf of Mexico and to intensify.

As a result the National Hurricane Center believes that little change in strength is likely to be seen as tropical storm Emily heads for the Florida Gulf coastline. 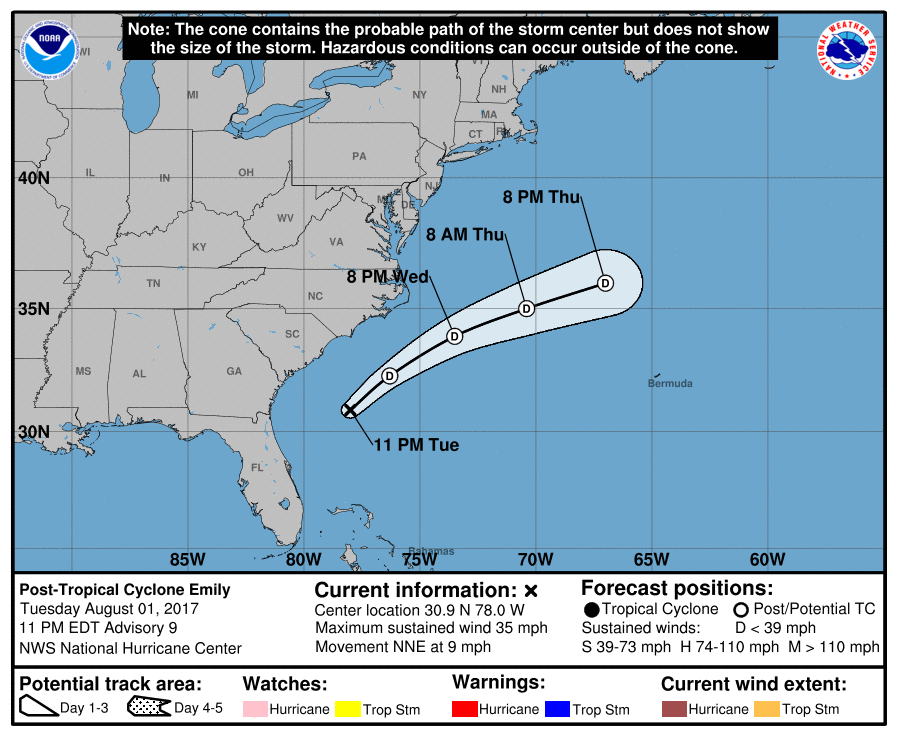 At the moment tropical storm Emily is only packing maximum sustained winds of 45 mph and there is unlikely to be too much intensification as Emily makes its way to a landfall later today. After that tropical storm Emily will cross the Florida peninsula tonight, weakening as it does so. Tropical storm force winds extend outwards up to 60 miles from the center of storm Emily.

But there is a rainfall threat to Florida which has the potential to create some localised downpours of as much as 8 inches of rain possible. 2 to 4 inches is more widely expected to be recorded along the path of tropical storm Emily as it comes ashore in Florida, with rainbands also able to cause up to 4 inches of rain more broadly across areas of the state.

So tropical storm Emily will not be any threat to the reinsurance sector, based on the current forecast, although rainfall accumulations of up to 8 inches do have the potential to cause some attritional impact to Florida focused property insurers, if they strike areas of higher exposure.

Tropical storm Emily will present a reminder to insurance, reinsurance and ILS or catastrophe bond fund interests that we are moving into the part of the hurricane season when greater levels of activity are typically expected to be seen.