The fourth named storm of the 2014 Atlantic Tropical Storm & Hurricane Season, has formed in the Bay of Campeche area of the southwest Gulf of Mexico. Tropical storm Dolly will be no threat to the U.S. but will pose a rain threat to Mexico.

Tropical storm Dolly’s winds have increased to 50mph, but now that the storm is approaching land little further intensification is to be expected. After making landfall in Mexico Dolly’s winds will be expected to weaken quickly.

The latest update from the NOAA describes the following hazards to land.

Rainfall, dolly is expected to produce rainfall amounts of 5 to 10 inches with isolated maximum amounts of 15 inches across much of tamaulipas and nuevo leon, as well as northern veracruz and eastern
san luis potosi mexico through wednesday evening. this rainfall is expected to cause life-threatening flash floods and mud slides in areas of mountainous terrain.

Wind, tropical storm conditions are expected within portions of the warning area by this evening.

Tropical storm Dolly has formed very near to the Mexican coast around the Tampico area which means the storm has only a day or two to strengthen before it comes ashore, based on the current forecast. Tropical storm Dolly currently has maximum sustained winds of around 45mph, with some higher gusts.

Additional strengthening is forecast before tropical storm Dolly makes landfall on Wednesday morning, but at the moment the forecasters give only a very slim chance that the storm could become hurricane Dolly before making landfall.

The main hazard affecting land is therefore likely to be rainfall, with the NOAA forecasting 3 to 6 inches of rain over a widespread area and locally some amounts reaching nearer to 10 inches. As with any rainstorm dumping that quantity of rain, there could a risk of flooding, landslides and damage to crops and properties as a result.

The waters in the Bay of Campeche area are very warm, which does mean that Dolly should intensify relatively quickly. Wind shear is low in the area which is also conducive to storm intensification. However with possibly less than 48 hours to develop Dolly is not expected to become a particularly dangerous storm or hurricane at this time.

There is a chance of some heavy rainfall and rough coastal surf impacting far south Texas but this is not expected to be a major issue at this time unless Dolly’s forecast track moved further north. 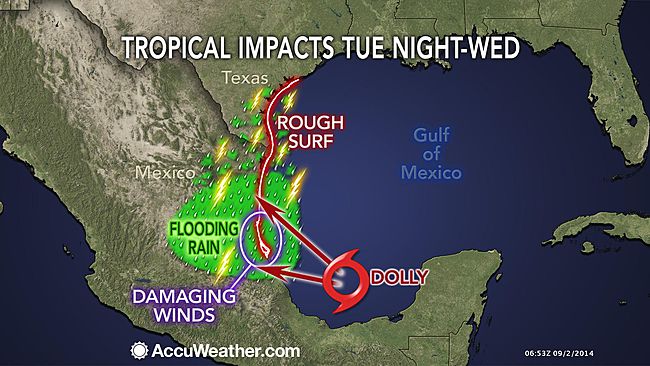