The third named tropical storm of the 2016 Atlantic hurricane season formed over the weekend in the Gulf of Mexico. Tropical storm Colin is now heading for the Florida peninsula, around the bend with the main threats currently seen as flooding rain and heavy seas.

Potentially flooding rains are considered the main threat, although the forecast does show tropical storm Colin having a chance of further intensification before it reaches land. Moist, warm air from the Caribbean is expected to be pulled north with the storm meaning the rainfall threat will likely last through Tuesday.

Rainfall totals as high as 4 to 8 inches are expected in some areas, with more widely 2 to 4 inches expected from tropical storm Colin. The storm is fast-moving which will lessen the rain threat slightly. However rainfall totals are likely to be sufficient to cause flooding in areas. 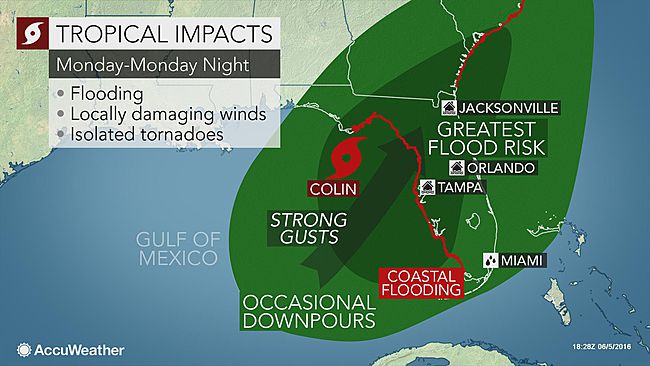 Wind is unlikely to be the major cause of any insurance industry losses from tropical storm Colin. With a chance of some further intensification, Colin is not at the moment anticipated to near hurricane strength. However forecasters have warned of the risk of falling trees and some power outages, as well as minor structural damage to properties.

It is worth keeping an eye on Colin’s intensity though, as should the storm become better organised over the warm waters of the Gulf intensification may be possible.

Tropical storm Colin is also expected to pose some threat to the U.S. eastern coast as it emerges from crossing Florida and moves northeast. Heavy seas and a risk of storm surge are being warned for the Carolinas and surrounding states. 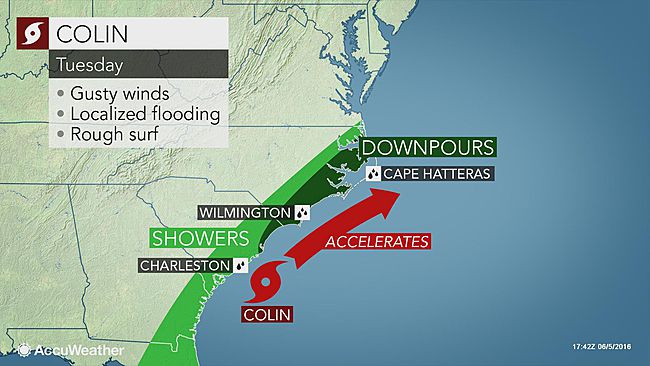 Forecasters also warned that there could be a chance of Colin intensifying a little after it emerges off the coast of Florida over warm seas. However the general steering direction is expected to be northeast and tropical storm Colin should be steered out towards open seas.

As the 2016 tropical storm season gets underway it’s prudent to remember that so many exposed reinsurance contracts, private ILS transactions and catastrophe bonds are exposed to named storms, so both tropical and hurricane level weather, and often on an aggregate basis.

That means losses caused by tropical storms like Colin can qualify under the terms of transactions, eroding retention levels and deductibles, so raising the risk of a reinsurance contract or cat bond paying out.

The catastrophe bond market remains largely exposed to U.S. named storm and hurricane risks, with most U.S. multi-peril transactions also containing an element of storm risk. The private ILS market is similarly exposed. So the proliferation of aggregate reinsurance transactions makes losses from any named storm a factor to watch as the season progresses.

We’ll update you should any intensification occur that raises the threat from tropical storm Colin. You can keep up to date with the tropics on our 2016 Atlantic hurricane season page.