Tremor Technologies, the insurtech offering a technology-based programmatic insurance and reinsurance risk transfer marketplace, experienced higher activity in its live cat ILW marketplace yesterday for hurricane Sally, than it did a few weeks ago for Laura. 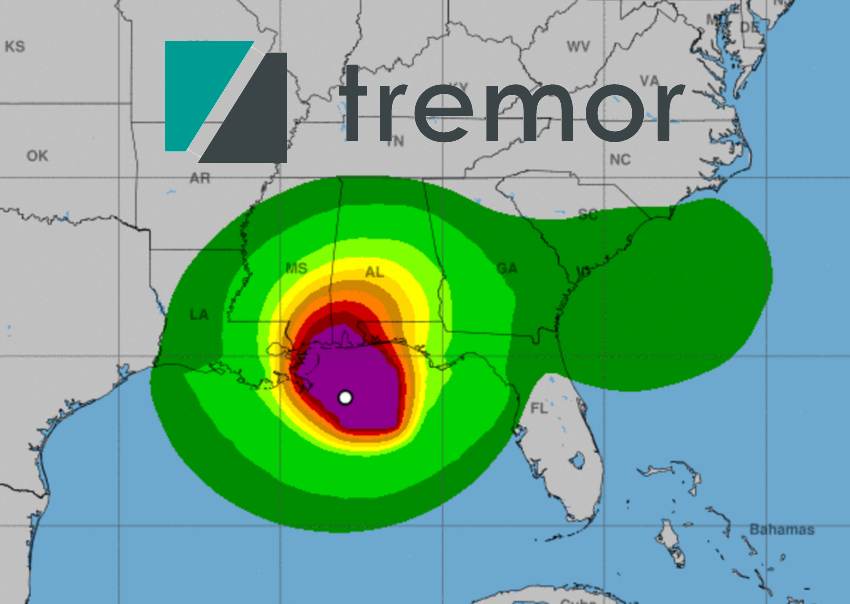 While no instruments traded, Sean Bourgeois, Tremor’s Founder & CEO told us that activity was actually higher than with Laura.

“As Sally slowly makes landfall this morning between MS and FL, it’s looking like a pretty serious Cat 2 storm with tons of rain and flooding potential.

“As you know, we ran several auctions throughout the day yesterday. We had lots of logins from buyers and sellers from all major markets including lots of ILS funds, more than for hurricane Laura which is exciting!”

While no buy or sell bids were submitted, Bourgeois said that this isn’t surprising given where the estimates for hurricane Sally sat yesterday.

“Our guess is that similar to Laura, the insurable loss estimate given the track and the storm intensity was considered manageable enough by prospective buyers – at least for now,” he explained.

Of course, with hurricane Sally having intensified to Category 2 on final approach to landfall on the Gulf Coast, things might have been different had this late ramp-up in wind speeds occurred yesterday, as it clearly elevates the loss potential from the hurricane.

For Tremor though, the increase in activity shows growing interest.

“We are encouraged though that interest is increasing in using the Tremor marketplace as a live cat tool and our hope is that as the Hurricane season continues and as we run more live cat auctions, we are looking forward to receiving bids and offers from those ready to trade,” Bourgeois said.

“With several more storms forming I think this season is far from over. With two storms causing significant insurable losses already, it will be interesting to see what happens with bidding activity should an even more serious storm threaten – as you know the great thing about our tech is that we can bring a large and disparate market together to trade in hours or even minutes!”

Being able to trade live cat ILW’s in real-time while a storm approaches, based on actual market capital appetite, supply and demand, is totally new to both buyers and sellers of protection.

There’s an education process ongoing here, as the reinsurance and ILS market gets used to having new, more dynamic ways to trade available to them.

Should a major hurricane landfall threaten, the functionality Tremor’s marketplace offers could come into its own, as a venue for securing last-minute hedging and reinsurance protection.