Positive rate momentum and the re-examining of terms and conditions (T&Cs) is expected to continue at the key January 2021 reinsurance renewals and beyond, while ongoing uncertainty surrounding another year of trapped capital will have an influence, according to industry experts. 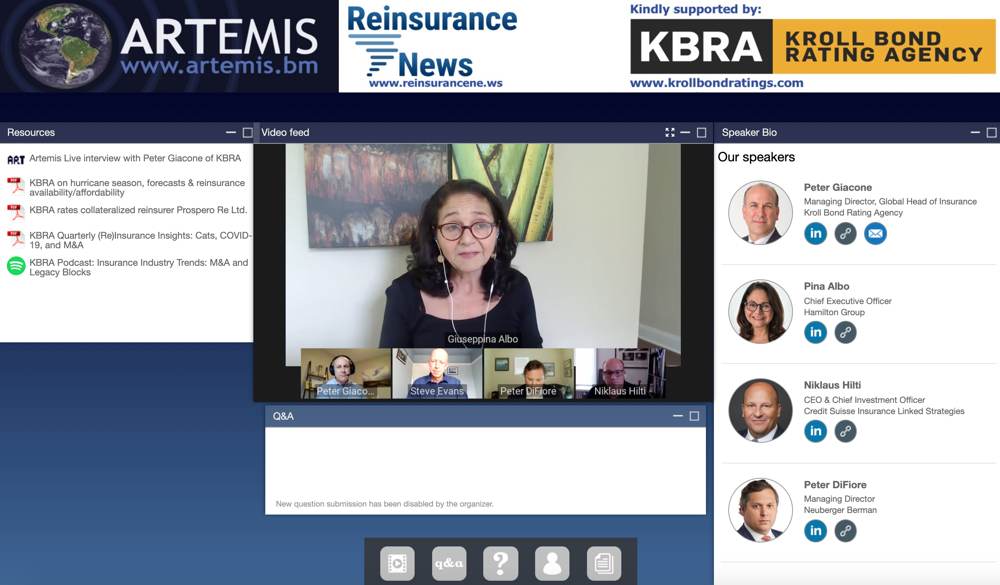 Artemis, in collaboration with sister publication Reinsurance News and in association with our partners Kroll Bond Rating Agency (KBRA), held a webinar yesterday which explored both the traditional reinsurance and ILS market in 2021 amid a global pandemic.

The discussion, which is now available to watch on demand here, covered numerous elements of the current market environment across both the traditional, and alternative, or third-party reinsurance capital space.

From Covid-19 responses to parametrics, business interruption (BI) litigation and the reinsurance renewals, attendees were treated to a thought-provoking and insightful debate.

Unsurprisingly, the upcoming important 1/1 reinsurance renewals were discussed, and the audience heard that while the market is by no means at an all-time high, it is trending more favourably.

“We’re seeing a quarter by quarter trend, both on the insurance and the reinsurance side, trending in the right direction. And, we think that there are factors there that will keep this momentum going into 2021 and beyond, quite frankly,” said Albo.

Adding, “Don’t forget, it takes more than one thing to move a market. It takes more than cat losses and in this reality that we’re living in now, we have four years that we had back to back years of losses. We have capacity that’s left the market, and we continue to see that every day. And, you’ve got this whole area of uncertainty, which is a market psyche, and Covid-19 is part of it but it’s not the only part of it.

“So, all those things combined, I think, are making for us the strong foundation for a more sustainable rate environment trend, and also beyond just property. We’re seeing this multi-line, multi-class, and I think this is here to stay for a while.”

Although market commentary suggests that further rate hardening is almost a certainty at Jan 1 and beyond, capital availability levels in some areas of the market are less so, as the sector grapples with the trapped collateral issue once again.

“At the moment, on the supply side, on the ongoing capital, I think their biggest unknown will be the collateral trapping, there’s no doubt about that. There are some uncertainties out there where some of them might reuse over the next couple of months. But, I doubt that they will completely go away. And, I think this will really have an influence on the trapped capital,” said Hilti.

He continued to highlight numerous unknowns that will play a role here, including the prominent test case in the UK surrounding BI losses related to the Covid-19 pandemic, and potential law changes in large states such as California.

“So, I would say this is not a small amount we will see at the year-end. On the other hand, as I said, there will be new capital coming in. There are people waiting on the sidelines for such a market disruption. I would guess that this capital is coming in more on the retro side than on the reinsurance side.

“On the reinsurance side, I’m not 100% convinced whether the market really needs that much more capital. It’s a large market, the retro market is much smaller. And, if you look at maybe trapping 20% or 25%, then there is definitely a need for new capital,” explained Hilti.

DiFiore agreed that it won’t be a consistent story across the market, with some areas seeing net outflows and others net inflows.

“Overall, my expectation is that the ILS capital pause, as some people have called it, is likely to continue. We may see very much a dynamic equilibrium as the outflows are matched with new inflows, because I also agree that there’s a lot of interest from sophisticated investors,” said DiFiore.

Expanding on heightened investor interest, he said, “My expectation is that the reinsurance segment, quota shares, some segments of retro, probably those areas where there’s less interest. Probably no surprise that we think that index based products, like ILWs and catastrophe bonds, will see a lot of interest, and we are seeing a lot of investor interest in the space…

“So, a lot of moving parts and we’re optimistic about the opportunities going forward. But, it is still quite early and there’s a lot of events ongoing, not only Covid-19, but the wildfires and hurricane season. So, I think we’ll expect to see an evolving story over the next several months.”

KBRA’s Giacone agreed and noted that this is now multiple years in which the trapped capital issue has come up, and that he expects it to remain an issue through the rest of 2020.

“Not many of the ILS, as it was already pointed out, are necessarily directly business interruption effected, there’s some of course, but not a tonne. But, having said that, I think what this has highlighted is the lack of standardisation and policy language in terms and conditions,” he explained.

“So, in the transactions we’ve seen, and folks in the space are well aware of this, you don’t necessarily have great standardisation. And, so, that complicates the issue of trapped capital, because across various contracts you can have different interpretations and different terms and conditions, which can lead to different outcomes and so on, and it exacerbates the problem.

“I think you will see an increased push for some more standardisation along that, to help alleviate that problem. I think the trapped capital will continue to spool out and will continue to be an issue.”

If you weren’t able to join us live you can still register to watch this webcast on-demand.

The on-demand replay will be available for at least one month, so please share the link with your contacts.