Traditional reinsurance capital to shrink, ILS to grow in 2022: AM Best & GC

According to the latest estimate and forecast for dedicated reinsurance capital from rating agency AM Best and broker Guy Carpenter, overall reinsurance market dedicated capital is expected to shrink, as traditional capacity falls, but ILS or third-party capital rises.

“For year-end 2022, based on how the investment markets have reacted so far to the interest rate hikes as well as fears of sustained inflation and a potential recession, we expect a decline in overall available capital,” the rating agency explained

Adding that, “Based on conservative estimates, we may see a return close to the levels observed at the end of 2020.”

AM Best and Guy Carpenter’s new forecast is that overall dedicated reinsurance capital will shrink almost 7% to around $530 billion by the end of 2022. 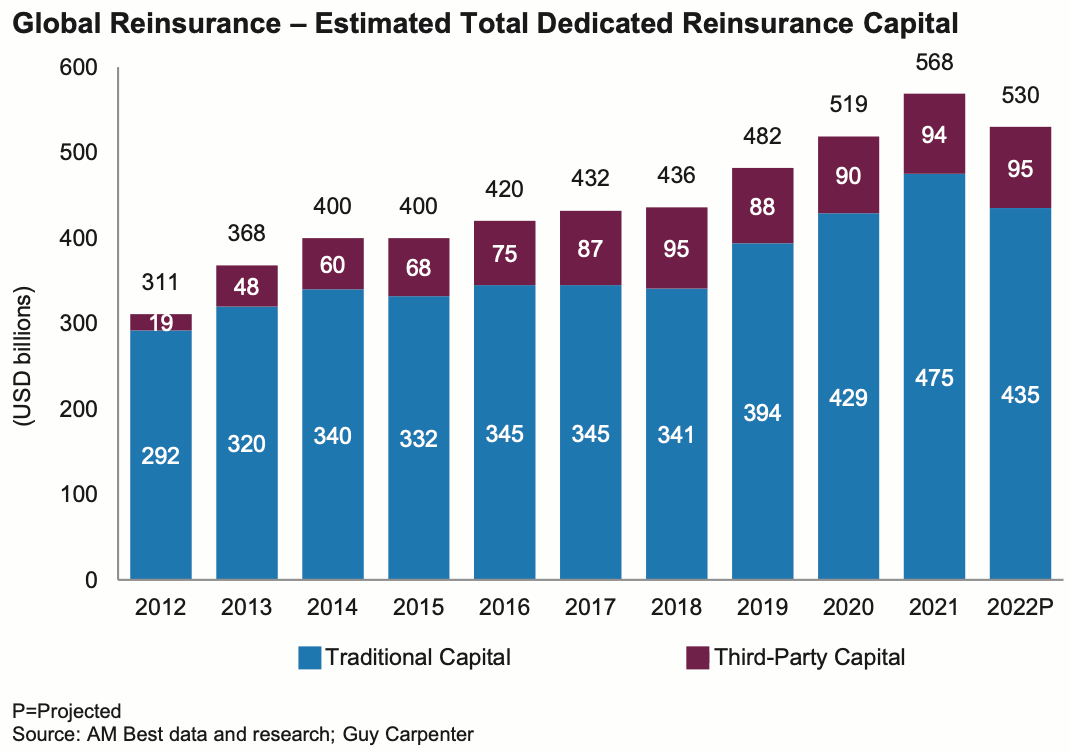 It’s telling that the last time third-party reinsurance capital was measured at $95 billion by AM Best and Guy Carpenter was in 2018, after the so-called great reload the ILS market underwent.

Having shrunk more than 7% by 2019, it is encouraging to see this recovery of ILS market capital levels continuing.

Improved reinsurance underwriting results are helping to buoy capital levels in the industry somewhat, a trend AM Best expects will continue.

Dedicated capital is also hit by reinsurers adopting a defensive position, AM Best explained as some players hold back capital to defend their balance-sheets against macro-effects.

New capital is not making a big difference right now either, with little coming in and execution of new startups has been slow at best, while investors are “extremely cautious.”

Third-party capital and ILS are subject to the same investor scepticism, AM Best notes.

Commenting on what could happen next the rating agency says, “Will the 2023 renewals mark a turning point for a “true” hardening market, able to attract new capital in droves and expand supply? Will third-party capital providers move first, as they have in previous cycles, taking advantage of the current retrenchment from traditional players and driving a new softening trend?

“Trying to predict the future is even more complicated nowadays, because how the year-end renewals go will depend heavily on actual claims activity and on where the global economy goes.”

If this year sees more losses flow to capital providers, while macro-economic factors continue to pressure the market, on the traditional and ILS side of reinsurance, then “uncertainty could remain so high that few investors will feel comfortable deploying capital regardless of the price,” AM Best believes.

“A few new entrants will still try, but their impact is likely to be limited in a market in which rates could continue to rise in response to more limited dedicated capacity.”