Severe storms rolled into Illinois in the last few hours, with tornado warnings were raised for the Chicago suburbs. At least one tornado touched down and has caused significant damage in the Woodridge suburb of the city. 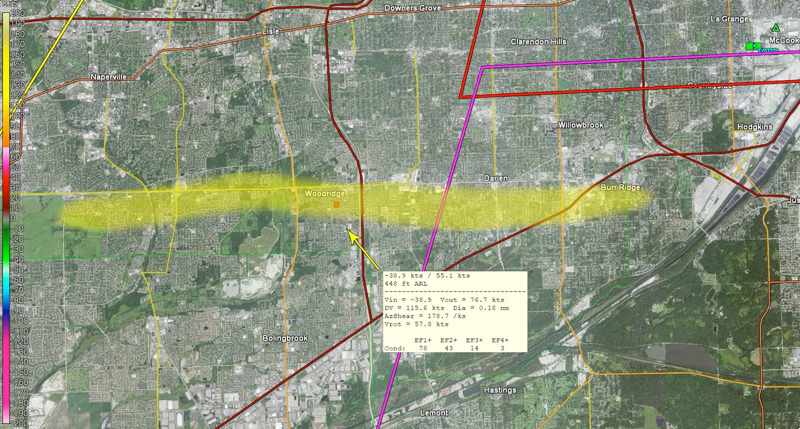 This event only struck in the last couple of hours, so information remains limited being during the hours of darkness.

The US National Weather Service confirmed the tornado, saying that it touched down somewhere near the Woodridge and Bolingbrook border in the suburbs of Chicago, and referring to a “confirmed large and extremely dangerous tornado” that presented a “life-threatening situation.”

At one stage, more than three million people were under a live tornado warning, as the severe storms moved into highly populated and urbanised areas.

Flights at Chicago O’Hare airport were even delayed, as the tornado warnings extended right towards the city itself.

After the touchdown, police asked residents to avoid the areas of Woodridge around Janes Avenue, Woodridge Drive and Woodward Avenue, to allow first-responders access, to avoid debris in the streets and because of expected casualties.

Reports suggest a number of structures have collapsed and widespread property damage has been experienced along the track of the tornado, along with some injuries and a number of people rushed to hospital, while power lines were also downed.

As ever, when severe weather events occur social media is one of the best places to look for immediate information that could be helpful to the insurance and reinsurance industry, given the number of meteorologists posting data there.

The tornado was formed from a quasi-linear convective system, or line of thunderstorms that rolled through into the Chicago suburbs, which suggests other areas will also have experienced strong winds, potentially heavy rains and possible hail as well.

A report from one meteorologist, Chris Jackson in South Carolina (the image above in this article is his) said that data shows the tornado that impacted Woodridge, Illinois may have been quite long-tracked, perhaps travelling as much as 10 or 11 miles through suburban areas.

Data suggest the Woodridge, IL #tornado traveled about 10-11 miles through a very heavily populated mixed residential and commercial use area with a maximum intensity (on radar) directly on top of Woodridge while crossing two interstates in the process. #ilwx pic.twitter.com/NUoPNvlTVw

He noted that the track above could have been off by a few blocks in either direction, due to the limitations of a radar signature.

Another tornado focused meteorologist said that an early analysis suggests the tornado could have been a strong EF3 tornado, given the fact debris appears to have been thrown as high as 18,000 foot or more, while Rotational Velocity (Vrot) may have been 66 knots.

It's never good to have to do these analyses this late at night, but the tornado that hit Woodridge, IL and nearby suburbs of Chicago was likely a strong EF3 based on an impressive 18,000+ ft TDS and a 66 kt Vrot, both remarkable for a QLCS tornado! #ilwx pic.twitter.com/ICdv3V15y4

With this tornado event having only occurred a couple of hours ago, it’s far too early for speculation on whether it could create a significant insurance and reinsurance loss.

The main concern at this time is for the people in the tornadoes path, as damage reports continue to suggest relatively significant impacts and potential to harm.