The most deadly tornado outbreak since 2014 has struck the United States, causing over 23 deaths and severe damage across parts of Alabama and Georgia yesterday. 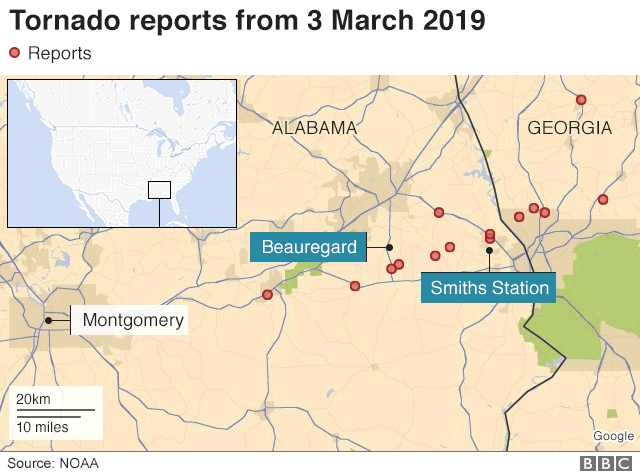 Alabama tornado map via NOAA and the BBC

In fact tornado warned severe thunderstorms and convective weather systems were also reported in parts of northern Florida and South Carolina, as a severe weather front moved south ahead of colder air.

Alabama bore the brunt of the severe weather outbreak it seems, with the majority of the deaths reported there and at least one tornado said to have been an EF3 strength that was over half a mile wide.

An EF-3 on the Fujita scale suggests a tornado is capable of causing severe damage, with winds of up to 165mph.

Catastrophic damage has been cited in the area of this tornado, with numerous homes completely destroyed.

No reports on actual numbers of properties destroyed have been released yet, but the tornado outbreak is expected to be significant enough to cause a meaningful impact to insurers that have risk concentrations in the affected area.

The Beauregard and Smiths Station areas of the county are thought to have been particularly badly affected by tornadoes and straight line winds, with much of the property damage expected to be found along a line through that area.

This tornado outbreak has caused more deaths than the entire year of 2018.

Georgia Power said the severe weather cut off electricity for 21,000 customers, as it tore down trees and power lines. Thousands remain without power this morning, reports suggest.

State officials said rescue and aid efforts were currently underway but have been hampered by the extensive debris blocking roads. Further deaths may be uncovered as damaged properties are investigated, experts believe.

For the reinsurance market and ILS players it is a reminder of the devastating impacts tornadoes can have.

With aggregate reinsurance covers having proliferated in recent years, severe weather events such as these can qualify under their terms and erode deductibles.

This can also be true of catastrophe bonds and ILS contracts providing aggregate catastrophe reinsurance protection.

It remains too early to have any idea of insurance and reinsurance market loss from this specific outbreak.