The insurance and reinsurance industry loss from the Tianjin chemical storage facility explosions in China continues to evolve, with estimates now suggesting $3 billion or higher. Some ILS funds remain exposed, but any actual losses are expected to be minimal. 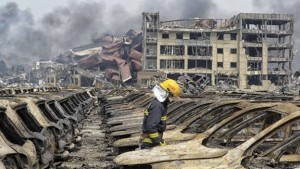 A number of insurance and reinsurance linked ILS investment funds had reported a potential exposure to the Tianjin blast losses in August, but at the time the industry loss estimates were suggesting an industry-wide impact of somewhere around the $1.5 billion to $2 billion mark.

The loss estimates have steadily risen, as the scale of the explosions, the impact to automotive storage units and areas, the complexity of the disaster and potential for pollution claims, as well as the challenging assessment process with China not allowing easy access to the site, became clear.

Reinsurance broker Guy Carpenter said at the beginning of September that it’s analysis showed that the Tianjin industry loss could range anywhere from $1.6 billion to as much as $3.3 billion. Another broker, JLT, said that the expectation was for a loss of at least $2 billion and up to $3 billion or higher.

However market sources have suggested that these estimates could end up being too low and that the final insurance industry loss from Tianjin could be as much as $4 billion or perhaps higher. In fact there was discussion at the IUMI marine conference that pollution exposures could take the loss over $5 billion, although this was called conjecture, according to the latest Lloyd & Partners energy market update.

It’s an extremely complex event, likely to become the largest man-made loss in history in Asia, and difficult for anyone to make an accurate assessment of the losses, even this far after the explosion itself. There is an expectation that reinsurance coverage will be called on to help some insurers pay claims, particularly some of the local players who tend to use a lot of reinsurance protection.

ILS players have found themselves exposed through some specialty insurance or reinsurance contracts in the international marine risks, Chinese property and Asian or global all-perils retrocession lines.

The expectation remains that a few big players, with outsize exposure to the event and region, will take the bulk of the losses on the reinsurance side, but a number of the ILS fund managers who underwrite specialty lines are not yet off the hook for a small potential impact.

Reinsurance group Validus Holdings revealed an estimate this week that it will face a loss of at least $43.9m across its Validus Re and Talbot units from the Tianjin blasts.

Many catastrophe reinsurance transactions, including fully collateralised written by ILS funds, contain exposure to man-made catastrophe events, while some retro contracts also cover man-made disasters. As a result some reserving may be seen as the loss increasingly becomes better understood.

In its latest report on the ILS fund market, Hong Kong headquartered ILS Advisers said that any ILS fund losses would likely be minimal, with an expectation that “the impact will be very limited.”

The Tianjin explosions are destined to become the largest man-made disaster loss ever seen in Asia. With ILS funds increasingly underwriting risks around the globe, growing their share of reinsurance programs and expanding into specialty lines, the ILS exposure to events such as this will continue to rise.