The insurance and reinsurance industry losses from the recent chemical explosion at the Chinese port facilities of Tianjin could reach as high as $1.5 billion, according to analysts at Credit Suisse. Meanwhile Fitch Ratings later said that there is a chance the insured loss could pass that level. 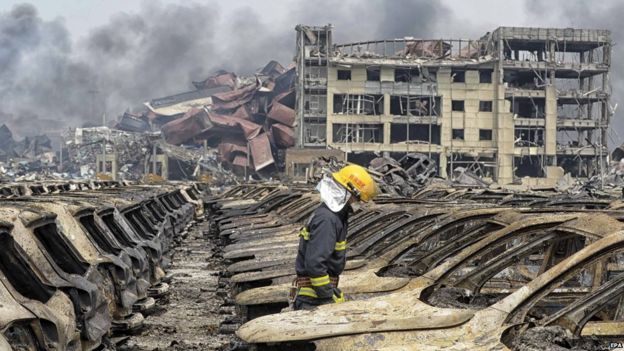 The explosion which occurred in the major Chinese port city of Tianjin, located in the northeast of the country, on the 12th August is estimated to have caused over $1 billion and as much as $1.5 billion of insured losses.

At that level of loss there is a likelihood that the global reinsurance industry will bear some of the cost, which could result in some exposure to any insurance-linked securities (ILS) funds or collateralized reinsurance vehicles which underwrite specialty commercial property or marine type risks on a reinsurance or retrocessional basis.

114 people were killed in the explosions, according to Chinese media, with as many as 70 still missing. 17,000 homes were said to have been damaged by the blasts and shock waves.

The logistics warehouse which exploded was housing sodium cyanide, hence the area around the site of explosion has now been evacuated which will exacerbate any business interruption claims that are filed as a result of the event.

The Tianjin port is the third-largest in the world for cargo transportation and the area is home to major international auto manufacturers import bases, including Hyundai, Toyota, Ford, Nissan, Volkswagen, BMW and Renault, as well as other industries. As a result, there is an expectation that some contingent business interruption claims could grow the overall insurance industry loss figure over time.

Reuters reported that Volkswagen had 2,700 cars damaged, most of which will now be unsaleable. Hyundai had 4,000 cars in the area, Renault 5,000 of which 1,500 were confirmed to be damaged. Chinese state media reported at least 8,000 cars worth around $630m were damaged.

Reuters quoted Credit Suisse analyst Arjan van Veen as saying; “It is still very early to determine the level of insured losses, but the event is likely to be large with initial insured loss estimates of $1-$1.5 billion and a large number of insurance companies affected.”

Meanwhile rating agency Fitch Ratings said that there is a chance that the insured losses from the Tinajin blasts could exceed the $1 billion to $1.5 billion level.

Fitch Ratings explained that the insurance industry losses from the blasts are likely to be “material” and that the “high insurance penetration rate in this area could make the blasts one of the most costly catastrophe claims for the Chinese insurance sector in the last few years.”

Fitch believes that claims from the blasts are likely to undermine the financial performance of some regional players and those property and casualty insurers with high risk accumulation in the affected areas. That said, it is too early to determine the exact impact that this incident will have on the credit strength of the Chinese insurance sector as a whole.

According to the China Insurance Regulatory Commission, non-life insurance premiums from Tianjin city amounted to CNY11bn (USD1.7bn) in 2014. As such, should insured losses come in at the high end of the initial USD1-1.5bn estimate, they would represent about 88% of total direct premiums written in Tianjin or roughly 5.4% of aggregated shareholder capital for the six most active issuers at end-2014.

The losses from the blasts could be shared with both local and international reinsurers, Fitch expects, which will help to mitigate the direct impact on the Chinese insurance sector.

While insurers could recover a portion of their property claims from their reinsurers, their exposure, the amount of retention and the number of reinstatements under the catastrophe reinsurance program are likely to determine the degree of severity to which they are affected. Fitch estimates that the overall risk cession ratios of major non-life players active in the Tianjin region range from 10% to 15%.

Chinese media have reported that more than 8,000 vehicles were destroyed by the explosions. Claims from motor insurance could impair insurers’ margins and capital if their reinsurance protection is marginal and the degree of risk accumulation within the affected region is significant. Aside from motor excess of loss treaties, in which the reinsurers indemnify the ceding companies for losses that exceed a specified limit, it is common for Chinese insurers to use quota share reinsurance treaties to mitigate their solvency strain due to the strong growth in recent years from the motor insurance book of business.

The majority of claims will come from motor, cargo, liability and property insurance. However, medical and life insurance claims are also likely to be substantial. Victims of death and injuries are covered by a government-supported accident insurance plan for the Tianjin region, in addition to their own medical and life insurance policies. Each injured person who is insured by the government plan can claim compensation of between CNY20,000 and CNY35,000, depending on the extent of injuries while compensation of CNY50,000 will be paid in the event of death.

While this event will likely be largely paid for by the traditional insurance and reinsurance industry, the type of reinsurance covers triggered are increasingly finding their way into the ILS space, as fund managers and specialists look to the specialty and marine lines for diversification and expansion.

As a result these types of man-made disaster events could become increasingly relevant to the ILS space and its third-party investors in the future.