There is an expectation that some of the claims from the recent explosion at chemical storage facilities in Tianjin, China, will be passed onto reinsurance companies. Rating agencies expect losses from the blasts will hit reinsurers, but stress that the amount is uncertain at this time. 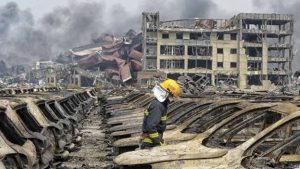 Rating agency A.M. Best said that the early estimates of insurance and reinsurance industry losses, which range from $1 billion to $1.5 billion, are subject to uncertainty as direct insurers and policyholders affected by the blast have yet to be allowed to inspect their property.

Fitch Ratings said that it believes the final insurance industry toll could surpass the $1.5 billion mark, once a clear understanding of the claims is possible.

As a result the early estimates could be too high or too low, but whichever way the final losses pan out there is an expectation that some of the financial cost will fall to the reinsurance industry to pay.

A.M. Best explained where in foresees the insurance sector losses from the Tianjin explosion coming from:

Property damage claims will form the major part of overall insured loss, which includes property and content losses at and near the blast site, arising from mostly commercial property policies, as well as thousands of new motor vehicles parked near the site, which were damaged by fire or explosion. Business interruption loss forms a large part of the uncertainty surrounding the ultimate loss for the insurance industry in this incident. On the marine cargo side, it will take time for claims arising from damaged shipping containers to be reported and inspected by insurance companies. Besides property, motor and marine cargo losses, to a lesser extent some liability, personal accident and life claims will arise from the incident.

In terms of who will bear the brunt of the claims, A.M. Best expects a mix of local insurance and reinsurance companies, with some passing onto regional reinsurers and the international market:

Not only local insurers and reinsurers in China are impacted by the incident, but some regional insurers and reinsurers may also incur losses from this incident through inward reinsurance treaties and facultative placements. To date, some losses have been reported to direct insurers, primarily under the marine cargo and property damage insurance contracts, while some reinsurers are still depending on their cedants to provide initial estimates.

A.M. Best also highlights that the Tianjin explosion comes less than two years after the 2013 SK Hynix’s semiconductor factory fire which caused a $900m insured loss. As a result, the rating agency said that “Both direct and reinsurance premium rates will be hardened, and reinsurers will likely tighten their terms and conditions for large commercial risks.”

S&P said that it believes that insurers would be able to absorb the losses from the Tianjin explosion and that it was unlikely that the magnitude of the loss would impair any. However the loss may be larger than the early estimates suggested.

The actual losses could be out of the expected range once more certainty emerges and the investigation of destroyed assets, which may not be that straight forward, unfolds.

“Based on our initial investigation, we expect most of the affected insurers and reinsurers we rate to be able to absorb the claims from the Tianjin explosions,” commented S&P credit analyst Connie Wong. “The 2015 operating performance of some affected companies could be lower though.”

S&P goes into some detail on the types of claims that are expected from the Tianjin explosion:

So far it’s unclear which are the exact types of policies being affected for the car losses. They could be either property insurance policies or marine cargo policies depending on whether the destroyed assets were in transit as covered by marine insurance. A standard marine cargo policy often covers storage of up to 30 days onshore. However, market information suggests that majority of the claims may fall into the property insurance category if most of the goods, especially the more than 10,000 cars–both local and imported–that were destroyed were at the storage stage onshore. The large number of cars destroyed also gives rise to the possibility that car and property insurance policies will be the main cover. Losses from damages to neighboring buildings, construction sites, or infrastructure will fall under the usual property and construction insurance cover.

Market information suggests that liabilities and losses from business interruption could be limited at this time. Also, the accumulated loss amount in the life and personal accidents insurance segments may not be that significant compared with that in the nonlife insurance segment due to the generally low individual sum insured in China’s workforce. Hence, the accumulated amount could be at a manageable level for most life insurers.

S&P also expects that reinsurers will bear some of the loss burden, saying that it anticipates that the insurance losses will be covered by reinsurance programs, including excess of loss and other treaty and
facultative reinsurance contracts.

There is some uncertainty over how reinsurance coverage will help insurers, depending on their status and how well reinsurer they actually are. S&P said:

Generally, the catastrophe protection could be up to a few billion renminbi for the larger companies, and therefore the reinsurance coverage for the losses should be sufficient. However, smaller
companies, which have higher exposure to Tianjin or the region, could be significantly more affected than the national or larger players, especially if these small companies have insufficient reinsurance protection.

The aggregated losses from the Tianjin blasts are expected to be well spread among local, regional and global reinsurance firms, S&P explained.

“China’s property and casualty market remains competitive, and we believe that the incident at Tianjin port is not likely to trigger increases in premium rates in the sector,” said Ms. Wong. “However, it may trigger some review of the risk management controls and underwriting processes against the backdrop
of the new insurance regulatory regime, C-ROSS [China Risk Oriented Solvency System], which requires a higher awareness of risk management.”

So the two rating agencies differ slightly in their expectation of impact to insurance premium rates in China, with A.M. Best having said that it expects both direct insurance and reinsurance premiums will harden after the blasts, while S&P does not believe that will be the case.

The two rating agencies are in absolute agreement that the loss will hit the reinsurance market, with some of the burden to be taken by global reinsurance players. Both are also in agreement about the uncertainty in the final loss figure, with a chance that it could go above the early estimates.

Another explosion at a chemical plant in Shandong province China this weekend has raised the spectre of further losses to property insurance and reinsurance programs and raised the focus on safety and risk management at China’s industrial complexes.

The other insurance and reinsurance issue that these explosion events highlight is supply chain and contingent business disruption. Given the damage to port facilities and warehouses at Tianjin there will be exposure and this could see international corporations calling on insurance coverage.

With a significant amount of reinsurance capacity deployed into major industrial facilities in China and a growing amount of insurance-linked securities (ILS) capital also targeting specialty commercial property lines and marine markets, in the future such events may hurt ILS fund managers.

At the moment any participation in industrial and marine reinsurance programs in China on a collateralized basis by ILS fund managers will likely be extremely limited, if indeed they participate at all. There could be some exposure to the event at collateralized retrocession players, but again this is likely to be limited.

However, with the insurance market growing in China, as penetration of cover increases and reinsurance premiums at risk grows, it will certainly be a region that the ILS sector has to watch in the future.