According to global reinsurance giant Swiss Re’s latest data, the first-half of 2020 saw US $31 billion of global insured property losses from disasters, up by roughly 35% on the prior year.

Of US $75 billion of economic losses to property from natural catastrophes and man-made disasters, only some 40% were covered by insurance and reinsurance, demonstrating the still significant global disaster protection gap.

The United States saw the bulk of the insured disaster losses in H1 2020, as severe storms and convective weather accounted for more than $21 billion of the toll, which is the highest since the first-half of 2011, according to Swiss Re.

These US storm impacts have filtered through to the reinsurance market, including some collateralised players or ILS funds, our market sources say.

Natural catastrophes drove $28 billion of the insured losses experienced around the globe in the first-half of 2020, with the so-called secondary perils responsible for the majority, the reinsurance firm explained.

For comparison, broker Aon estimated that global insured natural catastrophe losses rose to over $30 billion for the first-half of the year, while reinsurer Munich Re pegged natural disaster insured losses for H1 2020 at $27 billion.

You can see the trend in insured and uninsured disaster losses by year in this chart from Swiss Re’s sigma unit, below: 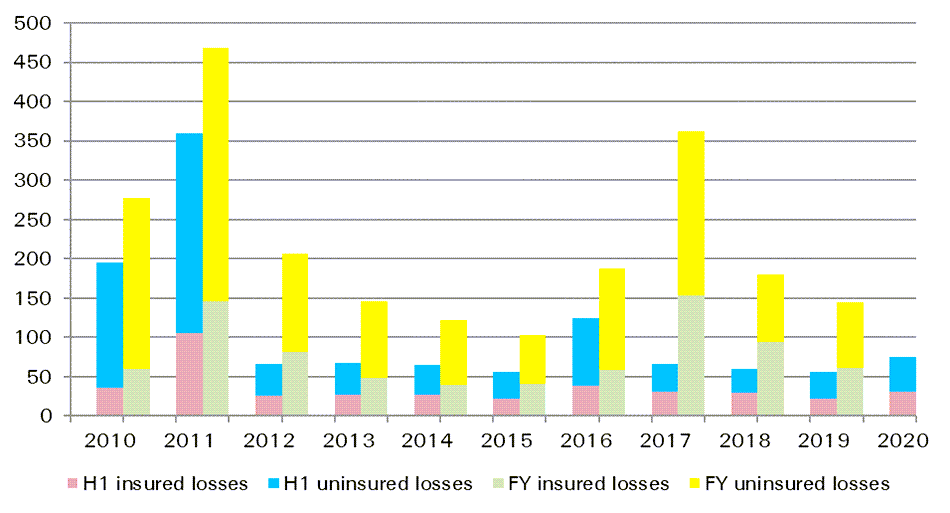 Our tally of COVID-19 loss reports from insurance and reinsurance firms now stands at around $24.5 billion, which demonstrates the costs facing re/insurers in 2020 as so far these are all booked in the first-half, either as actual claims or as IBNR, as well.

The influence of secondary perils continues to be felt across the insurance and reinsurance industry and the natural catastrophe toll for the first-half, while not exceptional, is sufficiently high that when added to Covid-19 it puts the industry in-line for an expensive year.

With the hurricane season just begun, industry participants will be hoping the forecasts for an extreme year are only in terms of number and not in terms of impact.

Swiss Re Group Chief Economist Jerome Jean Haegeli, commented on the gaps in coverage evident from the data, “Around 60% of natural catastrophe losses in the first half of 2020 were uninsured. As the severity of secondary perils will likely increase in the coming years, the importance of the insurance industry in closing natural catastrophe protection gaps is very clear. Climate change is a systemic risk and unlike COVID-19 it doesn’t have an expiry date.”