Global reinsurance giant Swiss Re has partnered with The Nature Conservancy (TNC), a leading global nature conservation organisation, to create a parametric insurance policy that can be used to both insure and enhance the resilience of coral reefs and the communities that rely on them. 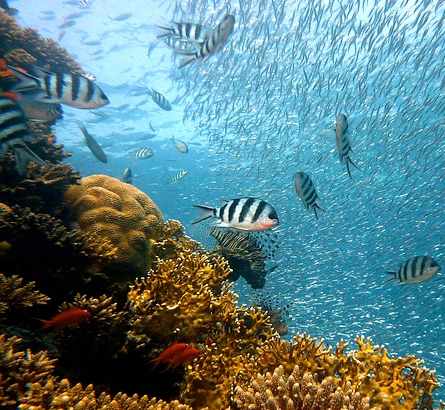 The parametric insurance product, which is currently in-design, will aid conservation and swift restoration of the coral reefs covered, if damaged by a major hurricane event.

As well as directly protecting coral reefs, the novel product is also designed to support the economic resilience of the region or community that relies on the reef, for tourism, fishing etc, thus helping to make communities more resilient to a portion of the economic damages that can occur from natural catastrophe events.

Reinsurance firm Swiss Re also notes that the creation of a parametric coral reef insurance product, “Offers an opportunity to create a scalable new market for the insurance industry itself.”

These resilience-linked insurance products, that both provide protection as well as benefits for local communities, are seen as a key opportunity for insurance, reinsurance and also insurance-linked investors. In a number of cases, while traditional insurance or reinsurance are seen as the catalyst for such efforts, their future is often envisaged to include bonds and other capital market financing structures.

For this specific effort, The Nature Conservancy and the State Government of Quintana Roo in Mexico have created the “Coastal Zone Management Trust,” which will provide coverage for a portion of the Mesoamerican Reef along Mexico’s Yucatan Peninsula, a key tourism activity zone for the country.

Supported also by The Rockefeller Foundation’s Innovative Finance group, the trust will promote conservation of coastal areas in the Mexican Caribbean region and will also finance the premiums for what will become the first-ever parametric insurance policy for a coral reef.

A pilot project to achieve coral reef coverage, along with resilience outputs, was conducted last year and this new trust appears to be the outcome of that work.

Financing for the trust and the parametric insurance coverage will be collected from the tourism industry and other government sources. This funding will provide a range of benefits, including: strengthening the economic resilience to hurricane damage of the region; encouraging the conservation of the reef; and also introducing a scalable new market for the insurance and reinsurance industry, TNC explained.

They call this a “multi-stakeholder model that can be applied to other regions and ecosystems,” which for the re/insurance industry right now is a very attractive approach, given the ambition of major players like Swiss Re to find new uses for their capacity.

“The Coastal Zone Management Trust and insurance for beaches and reefs are key elements for the protection of the coastal infrastructure, economy and jobs of the most important tourist destination in Mexico,” commented Carlos Joaquín González, Governor of the State of Quintana Roo on the launch of the initiative. “The Mexican Caribbean is visited by nearly 12 million tourists every year, which generate around 9 billion USD to the country, but these benefits are threatened by the possible presence of natural disasters such as hurricanes and storms that cyclically put us in risk. We have the advantage of being protected by the Mesoamerican Reef and that is why we are committed to the recovery and protection of our beaches and reefs.”

TNC explains that coral reefs are not just important for industries like tourism and fishing for local communities, but also for the resilience of the coastline itself.

Healthy coral reefs can soak up as much as 97% of wave energy, meaning that a loss of one-meter of reef height from a powerful storm could potentially double the cost of damage to coastal communities.

Reefs provide essential coastal protection, but data shows that since 1980, 80% of live coral reef cover in the Mexican Caribbean has been either lost or degraded due to disease, bleaching events, diminishing herbivores, and algae overgrowth.

Importantly, it is hurricanes that are the biggest driver of short-term decreases in reef structure, with between 20–60% of live coral cover often lost after a category 4 to 5 hurricane, compared to an annual decrease of 2–6% in live coral from other causes.

Beaches, essential for tourism in the Mexican Caribbean region, are also affected when reefs are damaged by storms, with rapid reef restoration and post-storm intervention proven to reduce damage to reefs and erosion on surrounding beaches.

Hence a quick paying parametric insurance policy can be used for reef restoration and recovery, after major hurricane events, helping the natural asset itself (the reef) to recover but also supporting the recovery and economic resilience of the local region as well.

“This insurance-for-nature approach is a promising example of creative financing to address imminent challenges facing marine ecosystems, both in Mexico and around the world,” explained Mark Tercek, President and CEO of The Nature Conservancy. “The Mesoamerican Reef plays a critical role in protecting residents, tourists, and businesses from storm surge and sea-level rise. This announcement is a win-win-win: for conservation, for the community, and for Mexico’s economy.”

The work to establish the trust involved significant science and modeling of coral reefs, alongside the risk management expertise of reinsurance firm Swiss Re, to determine the best way to insure a natural asset like the Mesoamerican Reef.

A parametric insurance policy, which would pay out quickly to finance repairs and restoration in the event of a major hurricane or storm, has been decided on as the most suitable solution for the conditions on the Mexican Caribbean coast, the group said.

Martyn Parker, Chairman of Global Partnerships at reinsurance firm Swiss Re, commented, “By combining private capital with public resources in a trust to fund premiums, we can help governments in vulnerable regions plan ahead more consciously to protect important natural assets, crucial to both the planet and the economy, like the coral reefs. In helping to speed up the recovery after a natural disaster, this type of innovative insurance will also help reduce the hit to the local and national economies overall. What we see is a new type of parametric insurance product that offers rapid disbursement of capital, which can be adopted for broader application in the market. We believe this could become a very effective tool to help countries protect their oceans better and achieve climate resilience faster.”

“We are proud to have been one of the initial funders of this project, which monetizes the protective value of nature and will boost interest in and understanding of nature-based resilience,” added Saadia Madsbjerg, Managing Director, The Rockefeller Foundation. “At the international level, interest in the use of insurance and risk transfer as a means of protecting people and property against the increasing costs of severe weather continues to grow. The next phase of this work will be to investigate the very real potential to take this insurance/trust model to scale to benefit some of the world’s most vulnerable communities.”

Whether these trust funds can become capital market backed in years to come will be interesting to watch. A portfolio of global reef insurance policies, combined with investments to finance resilience could become an entirely new and relatively uncorrelated asset class, which could be attractive to existing ILS investors as well.

If the parametric risk aspect of the fund could be segregated out as an asset class, that would definitely attract major ILS investors as well.

For now these initiatives are likely to involve traditional re/insurance players as they scale up, but the depth of the capital markets may be the best way to help them scale in the future.