Global reinsurance firm Swiss Re reported its fourth-quarter and full-year 2016 results this morning and impacts from large catastrophe losses, man-made losses and the continued pressure from soft market pricing, all impacted the figures. 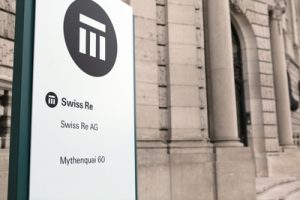 For Q4 2016 Swiss Re experienced a loss in its Corporate Solutions, due to man-made losses and pricing pressure, and Life Capital units, due to unfavourable effects of rising interest rates on an acquired portfolio, which dented the results.

Net income for Q4 across the reinsurance group was $517 million, down significantly from $938 million in the prior year. P&C reinsurance saw large U.S. and New Zealand losses, from hurricane Matthew and the Kaikoura earthquake, leaving this unit with an elevated combined ratio and lower net income at $552 million, down from $710 million.

Net income missed analysts consensus in the fourth-quarter by 18%, according to Morgan Stanley, and the analysts report that underlying P&C reinsurance combined ratios were better than expected though which helped to drive return on equity for that unit.

However, Swiss Re continues to exceed the targets it has set itself, across the group, beating its figures for return on equity despite the challenging market and loss environment.

“The environment was more challenging in 2016 than in past years, but we achieved and exceeded the Group performance target we set ourselves,” Swiss Re Group Chief Executive Officer, Christian Mumenthaler explained.

Swiss Re Group Chief Financial Officer David Cole commented on the fourth quarter; “We were reminded in the fourth quarter that large losses do occur, but paying claims and helping to make the world more resilient is what we’re here for. In addition, we have the strength and skills to continue to focus on our agile capital allocation and stick to our capital management priorities.”

Across the full-year 2016 Swiss Re reports declines in net income across all segments except Life Capital, compared to 2015, with impacts from natural catastrophes, man-made catastrophes, lower reinsurance pricing and lower performance in life and health all dragging down the results somewhat.

The investment portfolio continues to perform for the reinsurer, returning 3.4% across 2016, which is only slightly down from 3.5% in 2015.

A good measure of how tricky conditions have been, in terms of losses and the reduced profit available in reinsurance even to large groups such as Swiss Re, is the operating margin metric.

Mumenthaler, commented on the full-year; “We report a good net income for 2016, despite navigating a difficult environment for quite some time now. Amid softening market conditions, we saw minimal global economic growth and continued low interest rates last year, on top of significant political developments. Nonetheless, our full-year results show that Swiss Re continues to create value for our clients and shareholders by applying our strategic framework. This is driven by our outstanding client access, a large and strong balance sheet, and our position as a risk-knowledge company.”

It’s interesting that where Swiss Re highlights pricing pressure is in its Corporate Solutions unit, as this has been consistently cited as the differentiating business unit that provides the most opportunity to the large reinsurers, as they seek to navigate around softened reinsurance markets.

As this navigation has accelerated, the large global reinsurance and insurers are competing increasingly heavily in these large, tailored, corporate insurance risk transactions, resulting in increasing pressure here.

Despite the lower results, Swiss Re continues to forecast an excess of capital and expects to be able to continue its buybacks, which should please shareholders today. However the reinsurer does state that it will only launch a new buyback program as long as it has the excess capital and no major losses occur.

As reinsurance market pressures are seen to ease off, in terms of pricing beginning to bottom out, which Swiss Re has itself noted at renewals, global reinsurers now have to deal with an environment where margin has been squeezed out of the business, leaving them more vulnerable to loss impacts.

When losses happen broadly across the group, as seen in 2016, and market conditions are difficult, it is evident very quickly in results.

The price pressure in Corporate Solutions does suggest to us that the large reinsurers have shifted a significant focus here and that means pricing pressure may continue, as rates do remain attractive for this more directly underwritten business.

Which means conditions here may not get any easier in 2017 and beyond.

With reinsurance rates thought near a bottom, it looks like corporate risk rates are heading towards the same territory, which will exacerbate the challenges and make profitability harder to meet when there are loss heavy years.

But overall, the large, globally diverse reinsurers have an ability to pull levers across their business, which can help them to remain on target, as seen with Swiss Re today. These levers, of diversification, direct underwriting and global platforms, are proving increasing essential tools for the major global reinsurance players today.

The full results release from Swiss Re can be found here.