Reinsurance firm Swiss Re has given a preliminary estimate for global economic and insured losses from natural and man-made disasters of just $23 billion for the first-half of 2017, which is down 36% on the prior year and 30% below average. Economic losses are estimated at just $44 billion, down from $117 billion in H1 2016.

It’s another signal that reinsurance pricing is set to remain under pressure, as insured losses from catastrophes, man-made incidents and severe weather events come in well below (30%) the 10-year average of $33 billion meaning reinsurance capital levels will remain abundant.

U.S. thunderstorms were the largest driver of loss, hence the slight impacts seen to a number of insurance-linked securities (ILS) funds over the first-half and the exposure some collateralized reinsurance transactions and structures have picked up, being a peril that is well covered by the ILS market.

Preliminary estimates from Swiss Re’s sigma unit suggest that global economic losses from disasters, at $44 billion, were well below the average of $120 billion, reflecting a period that has been relatively benign from a global loss point of view.

With $23 billion of the economic loss covered by insurance and reinsurance it is actually a relatively high percentage, at 52% insured.

The 10-year average economic loss of $120 billion and the average insured loss of $33 billion, show that a more typical percentage insured is just 28%.

The reason for the higher percentage of insured losses in the first-half is the prevalence of U.S. severe thunderstorm loss events, which drove the bulk of the insurance industry loss at $16 billion (coming from severe storms and flooding in the U.S.).

This shows how the protection gap, while still significant, is typically much smaller where U.S. loss events are concerned.

“Fortunately, in the US, most households and businesses are insured against wind risk so they are financially protected when severe storms strike,” commented Swiss Re’s Chief Economist Kurt Karl.

Other drivers of loss during the year where cyclone Debbie in Australia, which Swiss Re estimates as US $1.3 billion industry loss.

Around 4,400 people lost their lives or went missing due to disaster events in the first-half, down from 4,800 the year before.

2017 has been a year of extremes, with freezing weather in Europe during the early part of the year causing losses, while record temperatures then struck the region in the summer months resulting in a heatwave.

Swiss Re puts the most impactful single event as the Colorado hailstorm, which it now estimates to be a $1.9 billion insurance and reinsurance industry loss event.

In total there were four billion dollar insured loss events from severe thunderstorms in the U.S. between February and May, the reinsurer notes.

The overall story is yet again one of insured losses coming in well below average, meaning reinsurance firms results remain buoyed thanks to lower than budgeted losses, while ILS funds have avoided any major impacts yet again.

So industry capital levels will remain high, with the potential for the reinsurance industry’s available capacity to grow even further as we head towards the next renewal seasons, likely exacerbating the pressure on pricing even more.

Looking at the chart below the second-half is often the major driver of loss for the year and with the Atlantic basin heating up and forecasts suggesting a more active hurricane year, there is plenty of time for a benign start to the year to turn into a much heavier toll for reinsurance and ILS capital to bear. 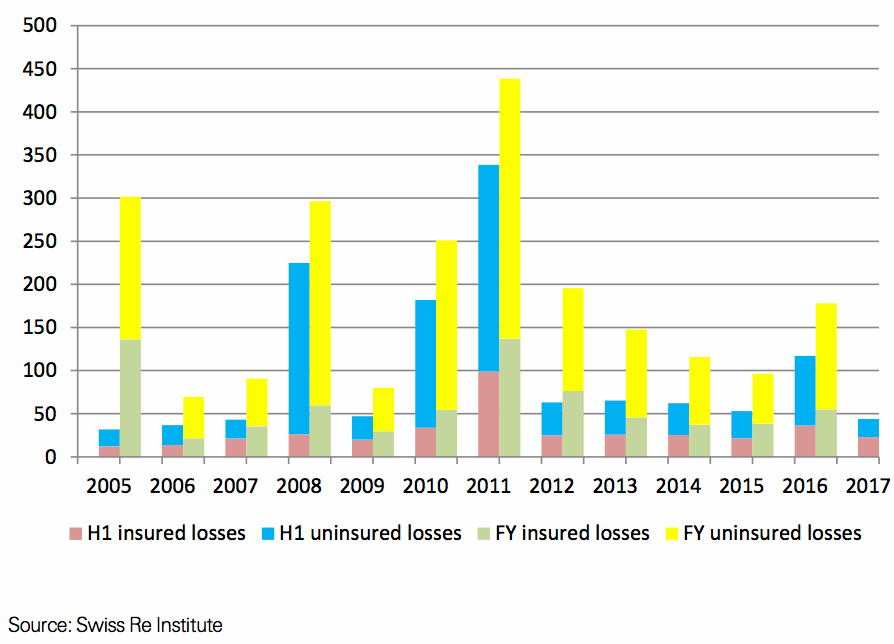 You can analyse disaster loss data via the Swiss Re Institute website.

« Older article All Aon ILS Indices gained in Q2, but returns down year-on-year