The strong potential returns on offer in reinsurance after the steep rate increases seen at the January 2023 renewals could soon entice new capital to enter the market, according to international broking group Howden.

Having reported that catastrophe retrocession excess-of-loss rates-on-line rose by 50% and global property catastrophe reinsurance rates rose by an average of 37%, Howden went on to detail the state of capital in the industry.

The January 2023 renewals saw a “severe capacity crunch” in reinsurance, as some capital providers pulled-back, at a time when others were only willing to maintain allocations, Howden explained.

There has been a “significant impairment of dedicated reinsurance capital” the broker reports.

“Capital erosion of 15.7% to USD 355 billion at YE22, the first full-year decline since 2008, together with significantly higher premiums, sent the sector’s solvency margin ratio (capital divided by premiums) to below 100, a level last recorded during the global financial crisis,” Howden reported (as seen in the chart below). 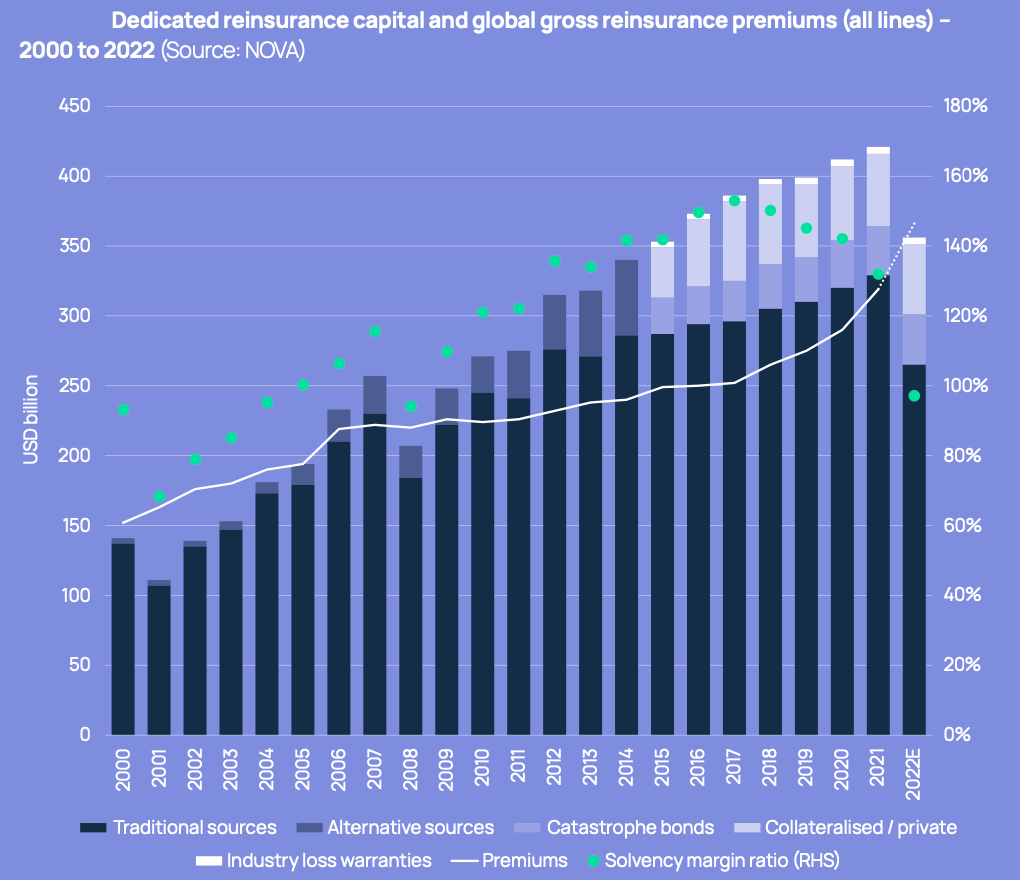 In the wake of recent hurricane Ian, the level of capital inflows seen after previous major industry catastrophe losses just weren’t seen, with those flows that did emerge delivering little help to the renewals.

“Capital raises from incumbent carriers in 2022 were restricted amidst heightened market uncertainty and higher financing costs. Nor was there any meaningful reload from third-party capital investors, who were inclined to assess 1 January renewal outcomes before weighing potential deployment opportunities in 2023,” Howden said.

Adding that, “Capital inflows of USD 3.3 billion plus post-Hurricane Ian were stunted compared to the USD 14 billion and USD 18 billion that entered in 2001 and 2005 during similar timeframes. Trapped capital compounded the dearth of supply.

“Future allocations into the reinsurance market will be weighed against the changing risk landscape, along with potential opportunities in other asset classes as ‘risk- free’ yields rise, especially at shorter durations.

“Some capital providers looked for allocation opportunities in the run-up to renewal, but not at a level or commitment sufficient to ease supply gaps.”

While so far capital inflows have fallen-short of previous post-catastrophe renewals and years, Howden believes that the now much higher reinsurance rates available could prove attractive enough to entice new capital in.

“The (re)insurance sector has previously attracted substantial amounts of capital post-shock events to compensate for the loss of capacity and leverage the attendant pricing opportunities. Although inflows slowed significantly last year, especially compared to previous large loss years, strong potential returns on offer in 2023 could soon entice capital back into the market,” the broking group explained.

José Manuel González, CEO, Howden Broking believes that capital is going to be king in 2023, a time when the reinsurance market is overall dented but clients are seeking out solutions, backed by capital, and demand for protection is high.

“Unlocking capacity in order to find solutions for rapidly changing risks that may soon outgrow the sector’s capital base will be crucial to maintaining relevance and offering clients coverage that meets their needs,” González explained.

Adding, “This is especially true for 2023, given the considerable macroeconomic and sector uncertainty, as well as the challenging start to the year for the reinsurance sector.

“Capital will therefore be a key differentiator for insurers, reinsurers, MGAs and ILS funds, which plays to the strategic investments Howden has made in this area in order to facilitate inflows, create capacity and find solutions for clients across the insurance value chain. Current market conditions demand a new approach to broking that is cycle-savvy, innovative, aggressively entrepreneurial and home to the sector’s strongest talent.”

Howden’s commentary may prove on-point, as there is demand on the capital side as well, when it comes to deployment, so the much higher reinsurance rates could make 2023 a year of strong inflows.

However, those raising and managing capital are going to need to provide confidence to the ultimate end-providers and investors, as capital is not going to be as easy to come by as it was in previous post-catastrophe event stages of the cycle.