Insured property damage related losses from European windstorm Sabine (also known as storm Ciara in the UK and Ireland) is estimated to be around EUR 600 million in Germany alone by an actuarial firm. 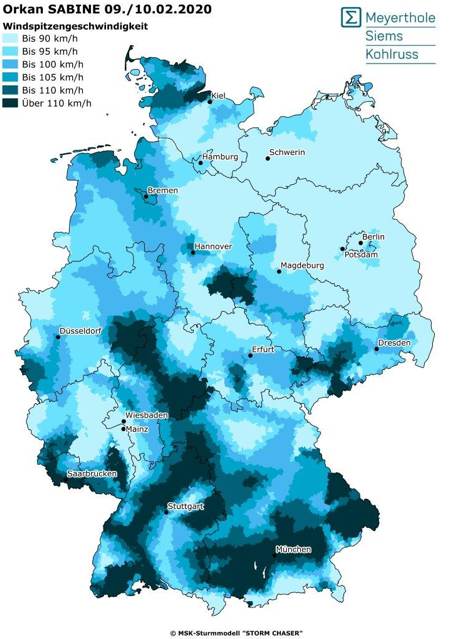 Actuaries from Meyerthole Siems Kohlruss (MSK) told us that they expect the eventual property insurance market loss from windstorm Sabine’s impacts in Germany will eventually fall somewhere around levels last seen after windstorm Niklas in late 2015.

Windstorm Sabine (Ciara) struck Europe over the weekend, with impacts widespread due to the size of the storms footprint.

The United Kingdom and Ireland were both particularly badly hit by the storm which was named Ciara there, but so too were northern European countries including France, the Netherlands and Germany.

In Germany the wind footprint of storm Sabine was particularly wide, affecting almost all of the country.

“We estimate the insured property damage caused by hurricane Sabine in Germany to be around EUR 600 million,” explained Onnen Siems from actuarial consultancy Meyerthole Siems Kohlruss (MSK) based in Cologne.

Storm Sabine (Ciara) has been compared to 2007’s European windstorm Kyrill, given its wide footprint and potential for impacts. But the actuaries note that at this stage the impacts from Sabine (Ciara) are not expected to be as significant.

Windstorm Kyrill is estimated as a roughly US $7.3 billion insurance and reinsurance market loss by Swiss Re, while fellow global reinsurance firm Munich Re put the Germany impacts at around the EUR 3 billion mark, a level that storm Sabine or Ciara is now now not expected to come close to.

Sabine is seen as similar to 2015’s Niklas given its wide footprint of damage in Germany. Niklas caused a roughly EUR 700 million property and auto insurance market loss in Germany.

“With around 600 million euros in claims, Sabine will be a medium-sized event for insurers, as happens every three to four years,” Siems explained.

There could be as many as half a million claims, the actuaries said.

It remains far too early to have an idea of actual insurance and reinsurance market losses from European windstorm Sabine (Ciara) across the continent, especially as impacts continue from flooding and high winds in certain areas.

It’s likely the storm will require investigation and an aggregation of loss data by PERILS AG, so more data should be forthcoming in time.

There could also be a level of data reported by catastrophe risk modelling firms, which will help insurance and reinsurance companies, as well as ILS funds, to analyse their portfolios for potential claims impacts.

The map above shows the location of peak wind speeds recorded across Germany according to MSK’s data and modelling.