If the Loma Prieta earthquake that struck California’s Central Coast on October 17th 1989 were to occur again today, the economic impact would be more than six times higher at $38 billion, while insurance and reinsurance carriers would face a more than four times larger bill at $4 billion, RMS estimates. 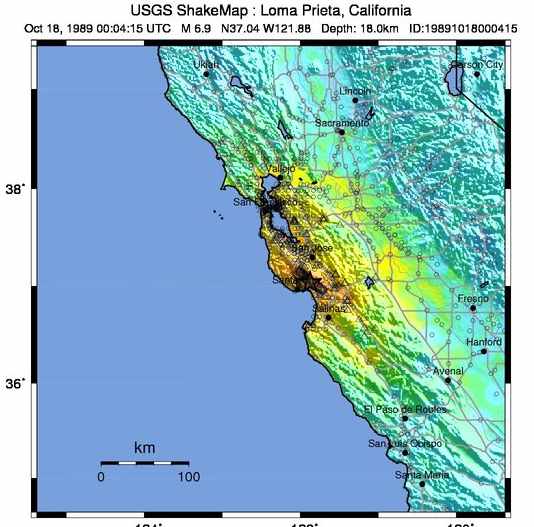 However, a similar scenario of a same sized magnitude 6.9 quake hitting a slightly different location in the same region would be estimated to result in an industry loss as high as $27 billion today, RMS said.

Catastrophe risk modelling specialist RMS looked back at the Loma Prieta earthquake in time for its 30th anniversary and found that rapid economic development and increased productivity in California, especially the San Francisco area, means the financial impact of a repeat of the quake would be particularly significant today.

At the time of the Loma Prieta earthquake in 1989 it was thought that the event caused $6 billion in economic losses and roughly a $902 million industry impact to the insurance and reinsurance industry.

After analysing the exact same earthquake occurrence but based on today’s exposure levels in the same region of California, RMS estimates that a repeat of Loma Prieta would result in a huge $38 billion of economic losses and a $4 billion hit to the insurance and reinsurance market.

The reasons for the significant change in cost is largely due to development, increased productivity and much higher value exposures, largely in the San Francisco area.

RMS explains that the San Francisco Bay Area was recorded as the 19th largest economy in the world with a GDP of $748 billion in 2017, meaning more buildings in the same area, giving a much higher likelihood of substantial damage from a repeat of the quake.

In fact, the headquarters of six of the world’s ten largest technology companies would experience strong shaking (MMI greater than 6), from a repeat of this event.

In addition, RMS says that the insurance protection gap will actually be higher today, as with a relatively low earthquake insurance penetration of about 10% and much higher exposure, the amount of coverage has not kept up with economic development.

On top of this, the region has a greatly increased population with almost two million residents, growth of nearly 35%, added to the counties that were most impacted by the Loma Prieta earthquake.

RMS notes that while an exact repeat of the quake won’t be seen, there is now a 5.3% probability of an earthquake of the same magnitude (Mw 6.9) or higher hitting the San Francisco Bay Area within the next year.

RMS has also modelled the potential financial costs of similar sized earthquakes in the region, with insurance and reinsurance market losses ranging from as high as $27 billion for a magnitude 6.9 quake in the Northeast Bay region, down to the $4 billion for the Loma Prieta quake.

The economic loss from such an event would be enormous, at $184 billion RMS estimates.

The impacts of any major California earthquake would be felt significantly in the insurance-linked securities (ILS) market, with exposure high in both the catastrophe bond and collateralised reinsurance markets. There could be as much as $3 billion, perhaps more, of catastrophe bond risk capital exposed to California quakes at any point in time, for example.

A Loma Prieta repeat would cause some losses to some ILS strategies, but the Northeast Bay scenario Mw6.9 quake at a $27 billion industry loss could cause much more severe losses to cat bonds and other ILS structures.