The major earthquake that struck off the coast of Japan in the early hours of this morning local time and the tsunami waves that followed, are not anticipated to have caused significant damage, according to risk modelling firm RMS. 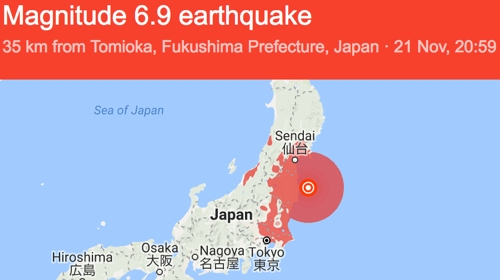 The earthquake which was preliminarily reported as a magnitude 7. but later downgraded to a magnitude 6.9 caused evacuations in many coastal regions of Fukushima and surrounding prefectures in Japan, as memories of the terrible toll from the 2011 Tohoku earthquake returned.

However the USGS said that there is only a 4% chance of economic losses rising above $10 million, which while it seems low reflects the fact that the quake was offshore.

The earthquake caused tsunami waves for some hours following the event, with tsunami waves recorded as high as 1.4m. Japan’s sea defenses are largely able to contain these smaller waves however and damage is said to have been slight.

The insurance and reinsurance industry will have been watching the event unfold closely, as initial warnings suggested that tsunami heights could have reached 3 meters. But thankfully the waves were much lower and impacts on land from ground shaking have also been much fewer than anticipated.

The ground shaking from the quake did impact one of the nuclear plants, the Fukushima Daini installation, where a cooling system for a spent nuclear fuel pool was knocked offline. However TEPCO brought the cooling system back on line within a couple of hours of the event.

It looks like the earthquake will be a minimal event for the insurance and reinsurance industry, with any insured losses retained largely within the local domestic market and perhaps no impact to reinsurance capital at all.

RMS said that preliminary reports suggest no significant damage has been caused by either the earthquake or the subsequent tsunami waves.

The full report from RMS can be found below.

“The 06:00 local time earthquake (November 22) 40km off the coast of Sendai, Japan is thought to have been another aftershock in the long running sequence triggered by the giant Mw9 Tohoku earthquake (March 2011) along the Pacific coast subduction zone plate boundary.

Today’s event (issued at a magnitude between Mw6.9 and 7.4) occurred in the Japanese plate above the southern extent of that 2011 major fault rupture. In this region the 2011 earthquake is not considered to have fully relieved the plate movement on the underlying mega-fault. So some experts in tectonics believe another giant earthquake, greater than Mw8, is still due on the southern continuation of the plate boundary, offshore from the Pacific coast east of Tokyo.

Although today’s earthquake was relatively modest, the Japanese authorities were justified in issuing a tsunami warning even though there is a direct relationship between the magnitude of a shallow earthquake and the size of a tsunami. This warning led people to evacuate from the low lying areas.

Whilst this cautious approach is understandable given the deaths and damage caused five years ago, generally issuing alerts and warnings that trigger evacuations for smaller earthquakes and tsunamis carries the risk that some people may chose not to evacuate quickly enough or at all for future tsunami alerts. One reason people did not evacuate along the coast of Japan in March 2011 was because a previous tsunami warning (after an earthquake in 2006) had proven unnecessary.”