The insurance and reinsurance market faces multi-billion dollar losses after April’s severe convective storms and weather in the United States that drove hail, tornadoes and straight-line wind damage across a wide swathe of the country, Aon said.

April’s toll follows at least $2.4 billion of economic losses, which could have driven anywhere from $1.5 billion to $2 billion of insurance and reinsurance market losses, as we reported previously.

April saw extensive U.S. severe weather events that will result in a multi-billion-dollar payout for insurers, according to Impact Forecasting, the weather and catastrophe modelling unit of insurance and reinsurance broker Aon.

The company cites 14 killer tornado events in the U.S. in April, which was the fifth-most in any month on record since 1950.

The most costly outbreak was from April 6th to 9th, when more than 30 tornadoes, hail stones larger than the size of baseballs and straight-line winds topping 70 mph (110 kph) all battered the country.

That single outbreak is estimated to have caused roughly $2 billion of economic losses and Aon estimates that three quarters could be covered by insurance, or $1/5 billion

The period from April 10th to 14th in total is estimated to have cost over $1 billion in terms of insurance market losses, the company said.

Further outbreaks from April 18th to 20th, 21st to 24th, 24th to 26th and 27th to 29th saw multiple tornadoes and large hail events across much of the south and midwest U.S., with each expected to reach into the hundreds of millions of dollars in terms of economic costs and the majority of the wind and hail-related damages expected to fall to insurers.

So overall, we could be talking economic losses north of perhaps $4 billion, with insurance and reinsurance market losses certainly approaching $2.5 billion to as much as $3 billion it preliminarily seems.

Another costly month as the U.S. severe convective and thunderstorm season continues to be very active.

Steve Bowen, Director and Meteorologist within Aon’s Impact Forecasting team, commented, “The highest frequency of billion-dollar disasters for the global insurance industry in the last decade has been severe convective storms (SCS); accounting for more than 40 percent of such events. The United States remains the epicenter for the peril as 54 out of 62 global SCS-related billion-dollar insured events had been recorded from 2010 through Q1 2020 alone. Following another very active month of tornadoes, large hail, and straight-line winds, the country was poised to add multiple events to this total. As exposure growth further accelerates into vulnerable thunderstorm-prone areas and combines with more dynamic atmospheric conditions, it is anticipated that these high-loss events will only grow more frequent in the future.”

Tornado activity in the United States continued to run ahead of average through April: 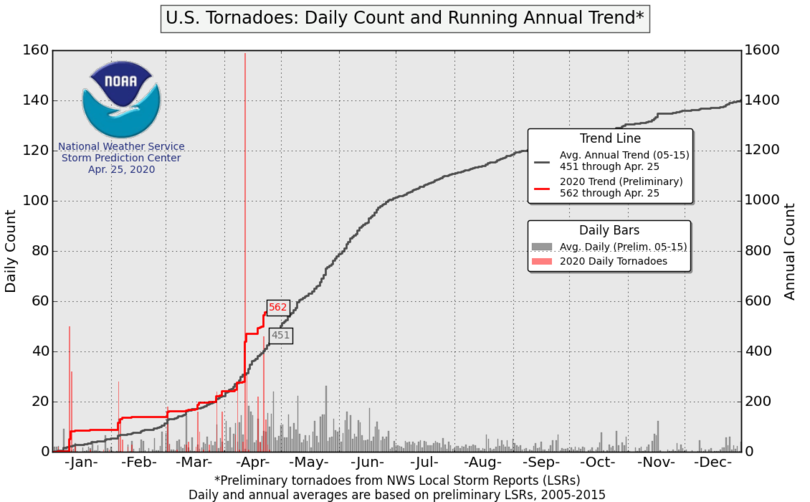