For global reinsurance company SCOR, 2022 saw the company adding new quota share sidecar capacity from third-party investors to its retrocession program, as it looked to add more diversification to its retro capital sources, while strengthening its retro protection. 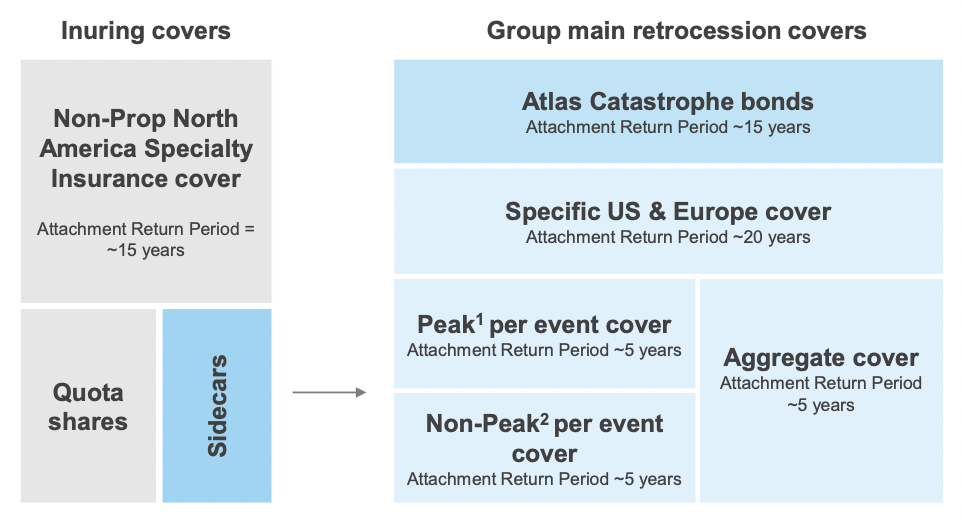 SCOR has always been a relatively significant buyer of retrocessional reinsurance protection, with its program usually being one of the earliest to hit the market in advance of the end of year renewal seasons.

Early marketing for SCOR’s retro program can begin in September, but in recent years market-forces have caused the structure to be adapted and SCOR to respond by adjusting the retro program to fit market appetites at the time.

Renewing the retrocession program for 2023 is unlikely to be an easy task, given the implications of hurricane Ian’s losses and another heavy catastrophe loss year for the retro and insurance-linked securities (ILS) markets.

As a result, the reinsurer says it is likely to have to reflect market appetites in its retro arrangements again, adapting the program from how it looked for 2022 to fit the availability of capital in different forms.

SCOR leverages multiple capital sources for its retrocession, from the traditional reinsurance market, collateralized sources of retro capacity, including its sidecar capital partners, and also its long-standing Atlas catastrophe bond program of which $690 million are currently outstanding.

SCOR splits out this capacity as traditional versus innovative, with innovative including the cat bonds, which it terms securitized reinsurance capacity, collateralized retro, and also the sidecar partner capital.

The sidecar capacity increased significantly in 2022, which may have been a reflection of retro market conditions, as both traditional and collateralized retro reinsurance became less available.

SCOR announced earlier this year that it had increased its third-party capital support in the first-quarter of 2022, taking the capital managed under its collateralised reinsurance sidecar platform to US $400 million.

Adding Alecta as an investor took SCOR’s sidecar platform to US $300 million, before it then added another $100 million to reach $400 million after Q1 of 2022.

These sidecar investments look set to remain core to SCOR’s retrocessional reinsurance program going forwards and can help it to offset any decrease in available collateralized retro capital, or in retro market appetite after Ian.

Here’s how SCOR’s 2022 retrocession program looks, which it seems will form a base for its 2023 retro renewal discussions.

In the above graphic, peak means US, Europe and Japan, while non-peak is everything else. It’s also notable that SCOR also has specific catastrophe covers for its syndicate at Lloyd’s that aren’t detailed in this diagram of its retro program.

Looking ahead to 2023, SCOR said that its 2023 retro program will be “adapted from 2022 to reflect a change in market appetite and the reduction of SCOR gross Nat Cat exposure.”

Speaking during a media call this morning, Jean-Paul Conoscente, CEO of SCOR Global P&C, discussed the retro program and the fact the placement for 2023 may be more challenging.

He explained that the retro program consists of quota shares, excess-of-loss reinsurance, and aggregate protection.

He said that he believes that the catastrophe bond and excess of loss reinsurance capacity needs that SCOR has for 2023 should “still be available”, but noted that aggregate retro is likely to be even harder to come by for next year.

In addition, he said some quota share capacity may also be a little harder to secure, or less available, as well.

As we explained in reporting on SCOR’s results earlier this morning, the company has pruned its catastrophe exposures back, especially in the US.

This is already becoming evident in the reinsurance firm’s results, such as today when SCOR said its hurricane Ian loss indicated a 0.4% market share, where as with hurricane Irma in 2017 SCOR’s market share was around 1%.

Also evident in the results today was the effects of SCOR’s retrocession, as the company revealed a positive net result of retrocession in Q3 2022 of EUR 244 million, suggesting it ceded a reasonable share of its hurricane Ian losses to some of its retro capital sources.

SCOR said that its objective for 2023 is to continue protecting capital and earnings with its retro program, suggesting the overall strategy of multiple layers and sources of retro limit will continue.

The state of the retrocession market is likely to mean changes are necessary to the retro program, but overall it seems SCOR believes sufficient protection will be available for 2023.