Room for ILS to increase its share of global securitisation issuance

Between 2010 and 2014 insurance-linked securities (ILS) issuance made up just 1.17% of the reported $2.87 trillion of issuance seen in the global securitisation market, highlighting room for significant growth as ILS could provide investors with a real alternative in this market.

A recently published report reveals that between 2010 and 2014 an average $574 billion of issuance occurs each year in the global securitisation market, with 2010 witnessing the highest volume, at a reported $609.21 billion.

During the same period, the new report from Deloitte reveals that ILS and catastrophe bond issuance per year averaged $6.69 billion, with the highest level of issuance occurring in 2014, at $9.09 billion.

While ILS and cat bond issuance levels have fluctuated since 2010, which is also evident with the overall securitisation market issuance, the ILS markets contribution to the global securitisation market’s total capitalisation has steadily increased each year, underlining the growing acceptance and maturity of the asset class.

According to Deloitte’s report, titled ‘Securing tomorrow – The ripple effects of insurance-linked securities in the reinsurance market,’ ILS accounted for 0.9% of the securitisation market in 2010 and 2011, increasing to 1.1% the following year, to 1.3% in 2013, and further still to 1.6% in 2014. The percentage reached 1.5% in Q1 of 2015, the last quarter Deloitte had the global securities market volumes for. 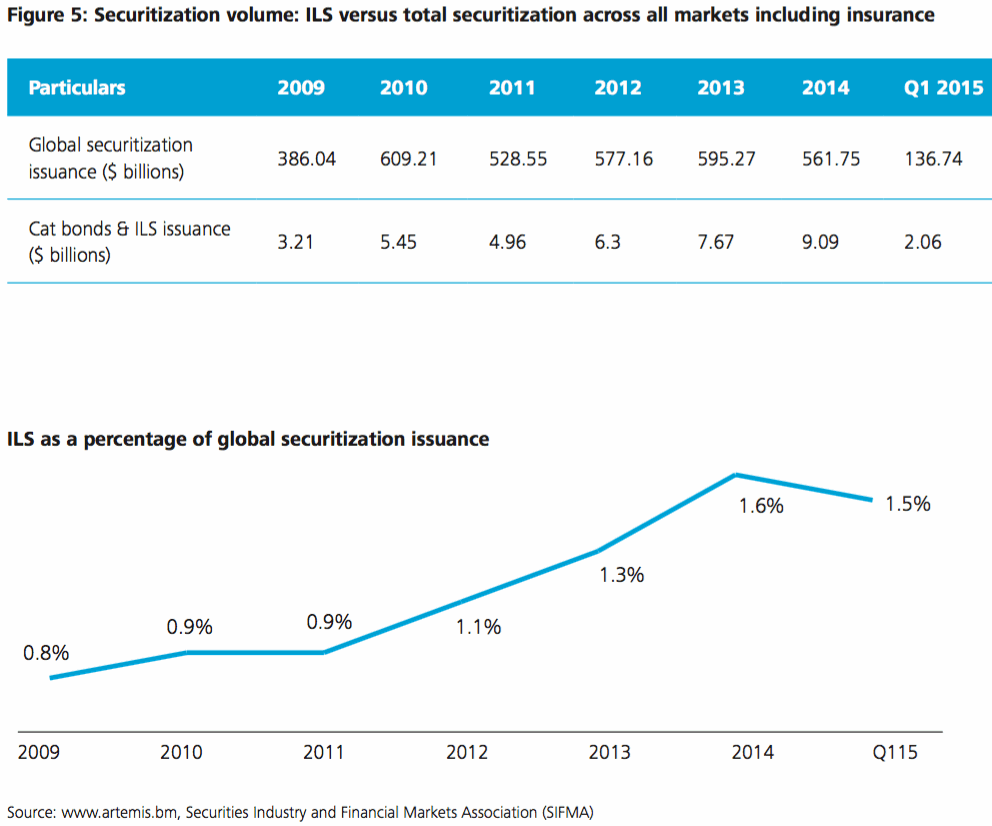 So while it’s clear that the ILS market is growing in size and increasingly eating into the global securitisation market, 1.6% is still an incredibly small portion of the more than half a trillion dollars of issuance witnessed each year, signalling substantial growth opportunities for the ILS space.

This presents an enormous opportunity for the insurance, reinsurance and ILS markets and their investors, as if more high-quality insurance risks were securitised, given the depressed yields in bond markets globally the increased ILS issuance would likely be snapped up.

Furthermore, the report stresses that even if alternative reinsurance capital were to reach its projected heights of between $120 billion and $180 billion by 2018, from the current reports of $68 to $70 billion, the ILS sector would still be relatively small in comparison to the overall global securitisation market.

All of which begs the question, why shouldn’t more of the $500 billion+ issued each year in the securitisation market be dedicated to ILS?

A burning issue across the broad, global risk transfer landscape in recent times concerns bridging the expanding protection gap, being the difference in economic to insured losses following a catastrophe event occurrence.

Increasing penetration levels in underserved regions of the world like parts of Asia and South America, and also in developed markets like U.S. flood, which still lack sufficient insurance and reinsurance coverage for its exposure, is seen as a vital way of improving economic resilience and sustainability in the face of climate change, natural disasters, and adverse weather events.

Furthermore, with threats such as cyber and terror becoming ever more real and costly as global interconnectedness intensifies, the capacity of the insurance and reinsurance markets is likely insufficient to adequately address the issues, an area where the expertise, skillset and willingness of the ILS space and its participants can help.

An annual, average $574 billion of issuance in the securitisation market over the last five years signals that the capacity and investor capital is out there, along with the willingness from investors to deploy it in securitised investments.

And as the ILS sector continues to innovate and evolve, seeking to strengthen and further solidify its stance in the global reinsurance landscape, it’s likely it will continue to grow its share of the global securitisation market as well.

A benefit ILS investment offers, and in particular catastrophe bonds, is its extremely low correlation to the wider financial markets, especially when compared to the majority of structures and products that make up the half a trillion dollars of securitisation issuance each year.

A fixed income, liquid investment asset class, that provides clear portfolio benefits in terms of diversification, low correlation and stable returns over the longer-term, should be hugely attractive to the securitisation markets investor base right now, if only the supply was increased.

How fast, and in just how much of a meaningful way ILS can further penetrate the securitisation market will depend on numerous factors, including the growing acceptance of it as a viable asset class as investor confidence and sponsor sophistication improves overtime, something that has been evident over the last few years.

For insurers and reinsurers, embracing securitisation to issue an increasing amount of ILS could bring a new capital base into their industry, helping them to lower cost-of-capital and source high-quality, collateralized reinsurance protection.

If risk and insurance securitisation could become even 5% of the global securitisation market, it would meaningfully grow the asset class and provide fixed income investors with a true diversifier that adds benefits to their portfolios and helps to build global insurance market stability at the same time.

As further efforts are made to make securitisation of insurance risks increasingly efficient and cost-effective, it has to be expected that growth of this asset class over the longer-term is likely.