Insurance industry losses are rising from severe flooding experienced in the area around Forbes in the Central West of New South Wales, Australia, with the Insurance Council of Australia forecasting “tens of millions of dollars” of insured losses. 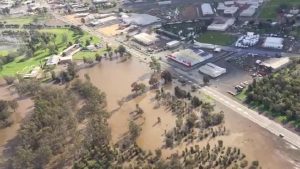 As with any catastrophe event in Australia there is a chance of some losses leaking into the reinsurance and as a result insurance-linked fund market, as primary insurers in the region are well-protected with occurrence and aggregate reinsurance protection, with ILS fund managers participating in their programs.

The area around Forbes, where two rural towns have been evacuated after inundation from the flooding, is not the most populated, or full of commercial businesses, but it is a heartland for agriculture in Australia and this where the majority of losses are expected to come from.

Significant damage to crops have been reported, which with harvest due in November likely mean full claims from farmers affected. Additionally livestock has also been lost, which could also increase the agricultural insurance toll.

“Early reports indicate the region has suffered extensive crop losses, while about 100 businesses and homes may also have been affected by flooding,” Insurance Council of Australia (ICA) CEO Rob Whelan said.

“It’s likely that insurance losses will be in the tens of millions of dollars. However, it will take several weeks for the full extent of the losses to be known,” he continued.

The ICA has declared the New South Wales flood event a catastrophe and said that insurers are on alert for dealing with claims.

Australia has a very high penetration of flood insurance cover, with over 95% of household insurance policies purchased providing flood damage protection, according to Whelan.

“Flood cover is also available to all farms and other businesses, but it’s not yet clear how many of the affected primary producers chose not to purchase policies that cover flood damage to crops,” Whelan said.

“In those rare cases where homes, businesses and farms have been inundated and did not purchase flood cover, insurers will use independent hydrologists to determine if losses can be covered under other provisions of their policies,” he explained.

So flood claims can and will be difficult in some cases, but with 95% of householders having flood cover and many agricultural policies including multi-peril coverage, the tens of millions of dollars insurance and reinsurance industry loss could easily rise.

Meteorologists are forecasting additional rain this week with the potential for an even higher flood peak as a result and ongoing flooding potentially for some weeks, meaning homeowners are being told to remain evacuated and farmers are anticipating even longer before flood waters begin to subside.

It will be interesting to see whether this event, if the losses eat into reinsurance layers, hits the ILS fund market at all. Some ILS funds have been targeting agricultural reinsurance covers in Australia, as it is seen as a catastrophe exposed line of business which suits their portfolios.

Australian flood risk is a significant peril, particularly given the high flood insurance penetration. With Australian weather-related agricultural crop cover provided by some private ILS and collateralised reinsurance contracts events such as this will increasingly need to be on the ILS markets radar.