At the upcoming mid-year reinsurance renewals our sources suggest there could be increased demand for reinsurance protection coming out of Florida, despite the delicate financial position of many insurance carriers focused on the state.

The twin effects of another year of elevated combined ratios for Florida’s insurance carrier cohort, alongside the stresses caused by lower solvency capital, are expected to drive demand for reinsurance in the state.

At this stage it’s too early to know whether the demand will materialise into buying, of course, especially given the increasing pressure some carriers find themselves facing.

Reinsurance broker Willis Re highlighted the plight of Florida’s insurers in a recent report, showing that 2020 was another year of elevated loss impact, albeit from a frequency event rather than any particularly major single catastrophes.

“The frequency of weather events / hurricanes for these companies can be just as bad compared to a large severity event,” reinsurance broker Willis Re explained.

On top of the latest accident year losses though, Florida’s carriers also faced further loss creep on prior year reserves, with many companies continuing to reference the legal environment and assignment of benefits.

All segments of insurers operating in Florida, the major nations, Florida specialist insurers and Citizens, reported elevated losses in 2020 and a severe underwriting loss for the year.

The chart above from Willis Re shows just how much worse 2020 was than 2019 for the Florida insurance market.

Loss ratios were considerably higher and for the national insurers operating in Florida loss creep from prior years was a significant issue.

For the Florida specialists it was the current accident year losses that drove the majority of the 2020 impacts and this has served to further dent their capital. 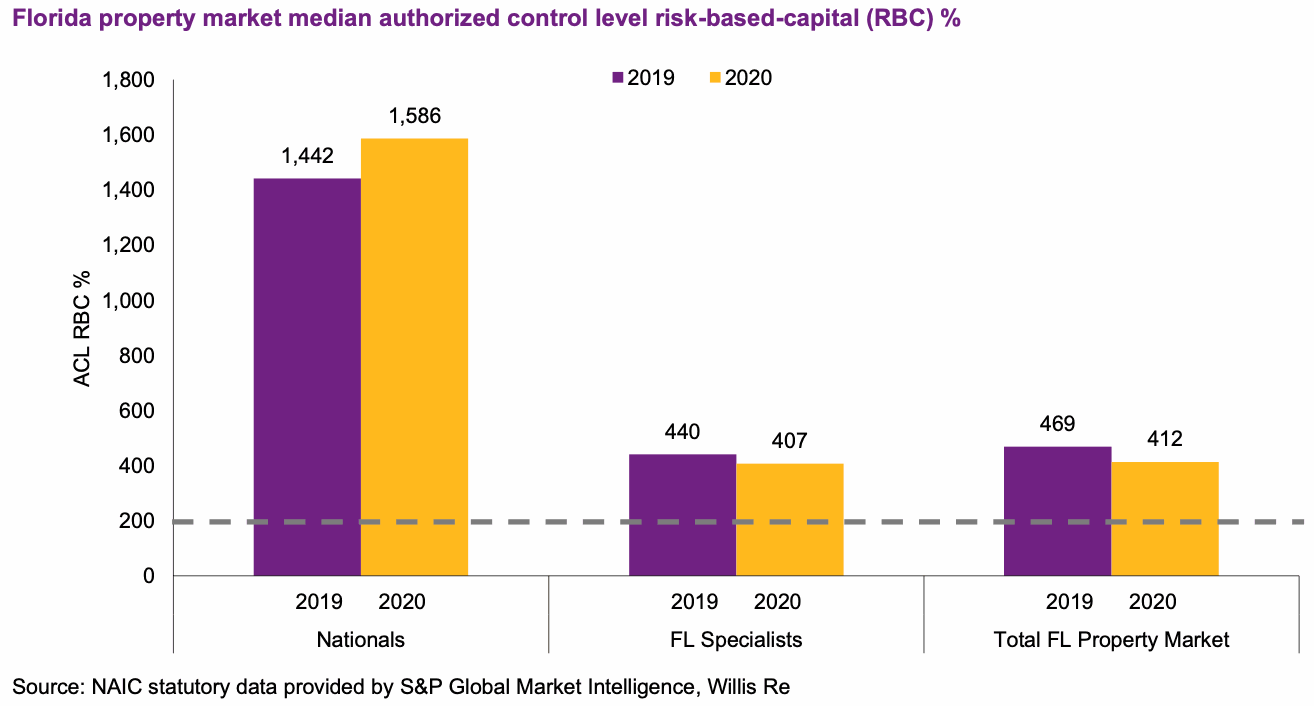 The chart above, also from the reinsurance broker’s report, shows that while risk based capital is up for the national insurers that operate in Florida, likely from the benefits of their higher pricing across the entire US, for the Florida specialists the combined effects of losses and possibly their higher reinsurance costs have dented solvency capital levels for the group.

However, Willis Re notes that the continued interests of investors in the Florida insurance market has helped and the infusions of capital that carriers received have helped some to maintain adequate capital strength.

But the combined effects on operating models, of higher losses, continuing loss creep and the uncertain legal situation, as well as lower statutory capital, is anticipated to drive interest in reinsurance and also equate to some higher demand as well, it seems.

Reinsurance capital plays a significant role for the Florida specialist insurers and as they move towards their renewal at June 2021, thoughts will be firmly on securing the most efficient sources of risk capital they can, as well as on multi-year protection.

We understand that a number of Florida carriers have been exploring catastrophe bond issues, but as yet it’s uncertain how many could proceed down the insurance-linked securities (ILS) route as part of their renewal.

We’re also told that discussions on large private collateralized reinsurance arrangements have resurfaced this year, having been less apparent for the last few renewal seasons.

As ever, the quota share will play a key role for insurers operating in Florida, as it enables the carriers to benefit from a sharing of risk and reward.

As reinsurance can help to offset volatility in results, but also offset the impacts of a reduced statutory capital level, it’s likely some carriers in Florida will look to upsize their reinsurance programs this year.

However, price is going to be the other factor in this and a significant hardening of Florida’s reinsurance market could drive some of the carriers worst impacted by losses and capital issues to purchase as little as they can get away with, leaving their business models open to question, as well as their survival hinging on a quiet hurricane season perhaps.