The recent earthquakes that struck a sparsely populated region of California near the town of Ridgecrest are expected to drive around $200 million of economic losses, but only up to $40 million is expected to be covered by insurance. 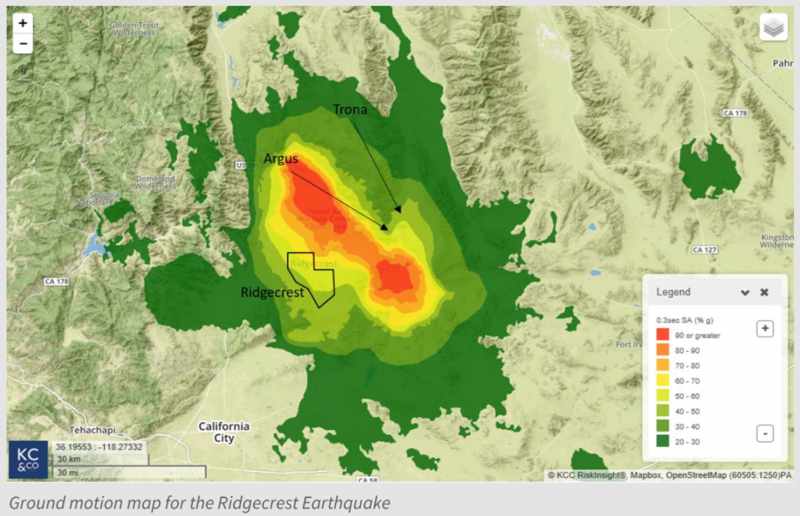 Catastrophe risk modelling specialists at Karen Clark & Company (KCC) said that the main earthquakes were a magnitude 6.4 foreshock on July 4th and a magnitude 7.1 on July 5th, with the towns of Ridgecrest, Argus and Trona the most impacted by shaking.

The quake ruptured in the California Eastern Shear Zone, one of the most seismically active parts of the state in recent years.

Damage to commercial structures was limited to ceiling, facades, several roof collapses and contents, aside from structural damage caused due to liquefaction.

KCC said that its team generated event footprints to represent the ground motion from the earthquakes using its risk model and said that it shows relatively little damage occurring due to the low exposure in the affected area.

As a result, KCC estimates the total economic loss as around $200 million from these events, not including infrastructure or damage at U.S. military facilities in the area, while the impact to insurance and reinsurance interests is expected to be less than $40 million.

So that’s less than one-fifth of the economic loss covered by insurance or reinsurance, which for the state of California is actually relatively high it seems, given the penetration rate of earthquake insurance cover is seen as only a little over 10% or so.

As ever this demonstrates the protection gap gulf in California earthquake risks though, an area where reinsurance capital can be abundantly available to take on the risk should the penetration rate rise.

It might take a larger event and loss to stimulate the kind of uptake that matters though, as Californians have got used to not paying to transfer their earthquake risks.

Also read: California quakes immaterial to reinsurance, but not baked into valuations.