Data from A.M. Best reveals that the 25 largest A.M. Best-rated re/insurers that operate in catastrophe-exposed business lines in London, Bermuda and Europe, have grown their 1-in-100-year catastrophe exposure in recent years.

From the end of 2012 to the end of 2015 the 25 insurers and reinsurers A.M. Best tracked and examined increased their retention of catastrophe risk at the 1-in-100-year level, owing to varied market factors that includes fluctuations in the pricing environment, and possibly the impacts of alternative capital.

A.M. Best examined the probable maximum loss (PML) data from the 25 largest catastrophe-exposed insurers and reinsurers that it rates, revealing a divergent approach to risk retention among the group of companies at the 1-in-100-year level and the 1-in-250-year level.

“At the lower return period, companies in the sample increased the proportion of business retained over the period as a whole. However, at the higher return period, net and gross exposures moved by very similar proportions,” said A.M. Best. 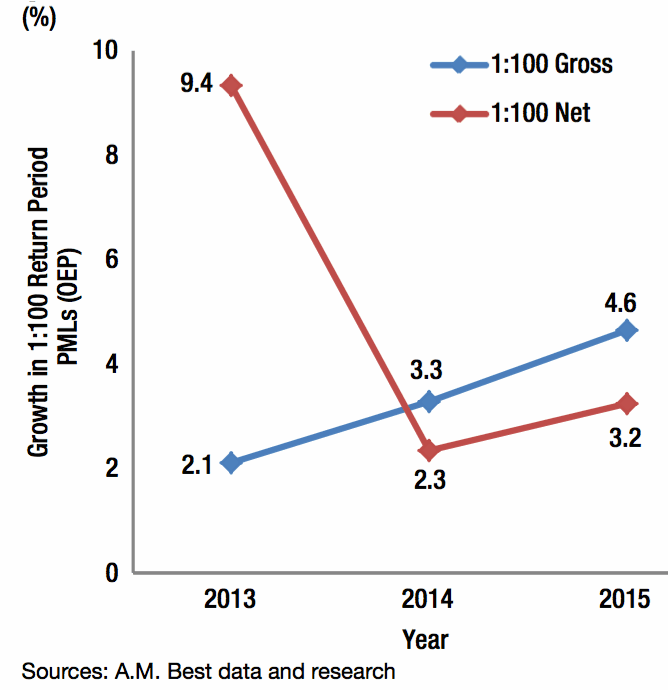 As the above chart provided by A.M. Best shows, during 2013 the group of companies retained a substantially higher volume of catastrophe risk at the 1-in-100-year level than in 2012, which is highlighted by the faster growth rate of net PMLs over gross PMLs, explains A.M. Best.

The ratings agency notes the attractive, and favourable pricing environment that global insurers and reinsurers experienced in 2013 following a series of nat cat events in 2011, and the impacts of Superstorm Sandy in the latter half of 2012.

“Insurers in the sample look to have been attracted to favourable pricing to retain more 1 in 100 year exposure in 2013 and to have done so in part by reducing reinsurance placed with smaller counterparties outside the sample,” said A.M. Best.

As highlighted by the chart, compared with the end of 2012 and through the end of 2015 the group of 25 re/insurers increased both their net and gross 1-in-100-year level catastrophe exposure.

However, the deterioration of rates for catastrophe-exposed business lines in 2014 and that is still ongoing in today’s market, meant the pricing environment dampened the potential for any significant retention increase similar to that seen in 2013.

That being said, A.M. Best’s data clearly shows that the re/insurers in question increased the overall volume of catastrophe risk retention for both gross and net 1-in-100-year PMLs, from 2012 to the end of 2015.

The ratings agency also notes that the ever-expanding presence and influence of alternative reinsurance capital likely played a role here too.

Commenting that the “underlying increase in net 1 in 100 year risk may have been offset by the ceding of risk to alternative capital instead of other members of the sample.”

The wealth of alternative reinsurance capacity continues to solidify and expand its place within the overall reinsurance landscape and, as rates declined and cost-efficiencies became more and more essential to navigating the challenging market landscape, a greater portion of insurers and reinsurers looked to the capital markets for a diversified, and efficient form of capital.

A.M. Best explains that the three most likely drivers of changes to net exposures for both risk levels are “movements in the level of business written on a gross basis by the sample; use of reinsurance which entails movement of exposure into and out of the sample; or changes in modelling which might affect the measured relationship between net and gross exposure.”

Adding that the more stable profitability of gross PMLs over the three-year period suggests that the final two points raised above, are likely a significant driver of the movements seen in the lower risk period, so the 1-in-100-year level.

“The somewhat lower growth in net exposure for 1 in 100 year risk over subsequent years when compared to gross exposure, is perhaps contrary to a picture of continued consolidation of direct insurers’ reinsurance programmes, though the differences are small.

“However, the chart would be consistent with that process continuing but being accompanied by a growing influence of alternative capital, both as retro capacity for reinsurers in the sample and also as an alternative market for direct insurers to use,” said A.M. Best.

It will be interesting to see if the 25 A.M. Best–rated catastrophe-exposed re/insurers continue to retain more risk at the 1-in-100 year level in the coming months. Should catastrophe losses start to normalise somewhat from the current benign landscape some insurers and reinsurers might need to significantly rethink their risk retention levels across all risk levels.