The underwriting performance of the reinsurance industry tracked by Willis Re for its reports has improved, but CEO James Kent warns that underlying returns on equity (RoE) are still “languishing below the cost of capital.”

Willis Re reports that global reinsurance capital, profits and return on equity (RoE) all rose in the first-half of 2021, as improved pricing drove higher premiums, retention and better profits.

Underlying RoE’s remain less strong, although they too have noticeably improved, but not enough to counter the cost-of-capital of the reinsurance sector, Willis Re believes, which suggests firmer market conditions are going to need to persist.

In its latest reinsurance market report, Willis Re highlights that reinsurer capital has continued to grow strongly, driven mainly by strong net income.

Out of this and given the strong reinsurance rate environment, reinsurers have been retaining more of their net income than before, which has helped to drive profits and returns.

Reinsurers achieved 15% premium growth, which Willis Re calls “exceptionally strong”, while at the same time their weighted average reported combined ratio was 94.1% for the first-half.

Combined ratios, excluding prior year development, and normalising for natural catastrophe losses, have improved steadily since 2017, Willis Re notes, putting reinsurers back on a better and more profitable footing.

Expense ratios have also fallen, but in reality this is premium income offsetting rising costs, as core corporate expenses continued to rise, it seems. 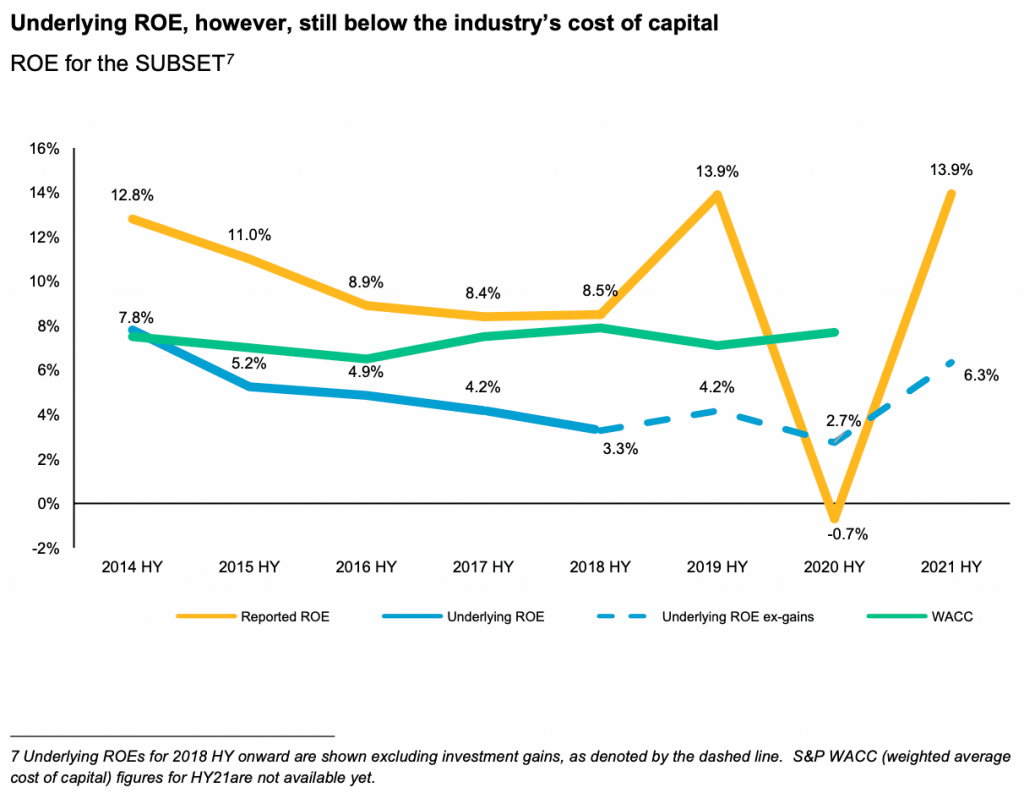 James Kent, Global CEO, Willis Re, commented, “Reinsurance providers will be heartened by these results. The industry has endured several years of below-par performance, capped by the calamitous experience of COVID-19. Now the remedial work reinsurers have undertaken over the past several years is bearing fruit.”

But he also cautioned that, “Unfortunately, though, very strong premium growth in the first half of this year was achieved against combined ratios which are not much lower than during the softer parts of the cycle, therefore leaving underlying ROEs still languishing below the cost of capital.”

The underlying RoE as measure of profitability of reinsurance perhaps seems strange, when you consider how rich companies in the sector are, how easily they have been able to raise fresh capital and how costly the industry itself is, when you consider intermediation, the transaction itself and other inherent inefficiencies.

But it does help to drive home the continued need for two things in reinsurance. Efficiency and a lower cost-of-capital.

If the industry is going to consistently produce underlying RoE’s that fail to cover its capital costs, it has to add efficiency levers and use more efficient capital as well.

Perhaps telling is the fact that for the five largest reinsurers in the world, Munich Re, Swiss Re, Hannover Re, SCOR and Berkshire Hathaway, their combined ratios have been over 100 each full-year since 2017.

This shows the pressure the sector has been under, even though it has still managed to deliver profits thanks largely to its investment side.

All of which, we believe, will continue to drive the need for innovation, efficiency and a desire to leverage third-party capital, among the reinsurance players, as they look for levers to help them deliver shareholder profits even though their RoE’s may not be so impressive on an underlying basis.