While global reinsurance capital grew strongly again in 2019 the underlying results of the traditional reinsurance market remain less impressive, with the return on equity (RoE) of a subset of the market declining further and falling well below the industry’s cost of capital, broker Willis Re said today.

Reinsurance broker Willis Re analyses a subset of 18 global reinsurance firms in its latest report and finds that even though reinsurance industry capital levels rose to a new high, the generation of capital is not always tied to adequate underwriting performance, it seems.

Driving the growth though wasn’t the underwriting performance of the reinsurance industry, rather it was strong investment market performance.

On the decline in alternative reinsurance capital, Willis Re said, “This drop was primarily due to loss deterioration from 2017-18 nat cats. While some investors had outflows of capital in 2019, others with different strategies had quite significant inflows.”

However, Willis Re notes that perhaps all of the expansion of reinsurance capital in 2019 will have been lost in early 2020 as the market volatility caused by the Covid-19 coronavirus pandemic has dented reinsurance capital through its hit to investment markets.

“The significant swings in investment markets in March and April 2020 have resulted in year-to-date impacts to the global reinsurance capital base ranging from –5% to as much as –20%,” the reinsurance broker explained.

James Kent, global CEO, Willis Re, commented, “This analysis demonstrates how sensitive the global reinsurance capital base is to investment markets. Thankfully strong capital growth in 2019 allied to judicious investment strategies by many companies has put the industry in a good position to weather the current volatile environment.”

However, performance is not as clear cut as just looking at the top-line, as reinsurance capital levels and the returns delivered to shareholders by reinsurers seem to have been largely driven by the investment side of the business in the last year.

Willis Re explains that, for the subset of the reinsurance market that report sufficient data to analyse increased significantly, the reported return on equity (RoE) inceased from 4.2% in 2018 to 9.7% in 2019, which was driven by the investment gains made.

But in analysing the underlying RoE, so excluding investment gains, abnormal catastrophe losses and prior-year reserve development, Willis Re found that performance is not as impressive.

“The analysis shows that the reinsurance sector’s underlying RoE remains in gentle decline and is well below the industry’s cost of capital,” the broker said.

While the industry has been focused on 2017 and 2018 as significant years of global catastrophe losses, 2019 actually saw underwriting performance worsen compared to the prior year.

The reported combined ratio of the subset of reinsurers increased from 99.2% to 100.6% in 2019, reflecting a worse underwriting result.

Perhaps concerning for reinsurers, this key metric of underwriting profitability has also been increasing every year going back to 2013. 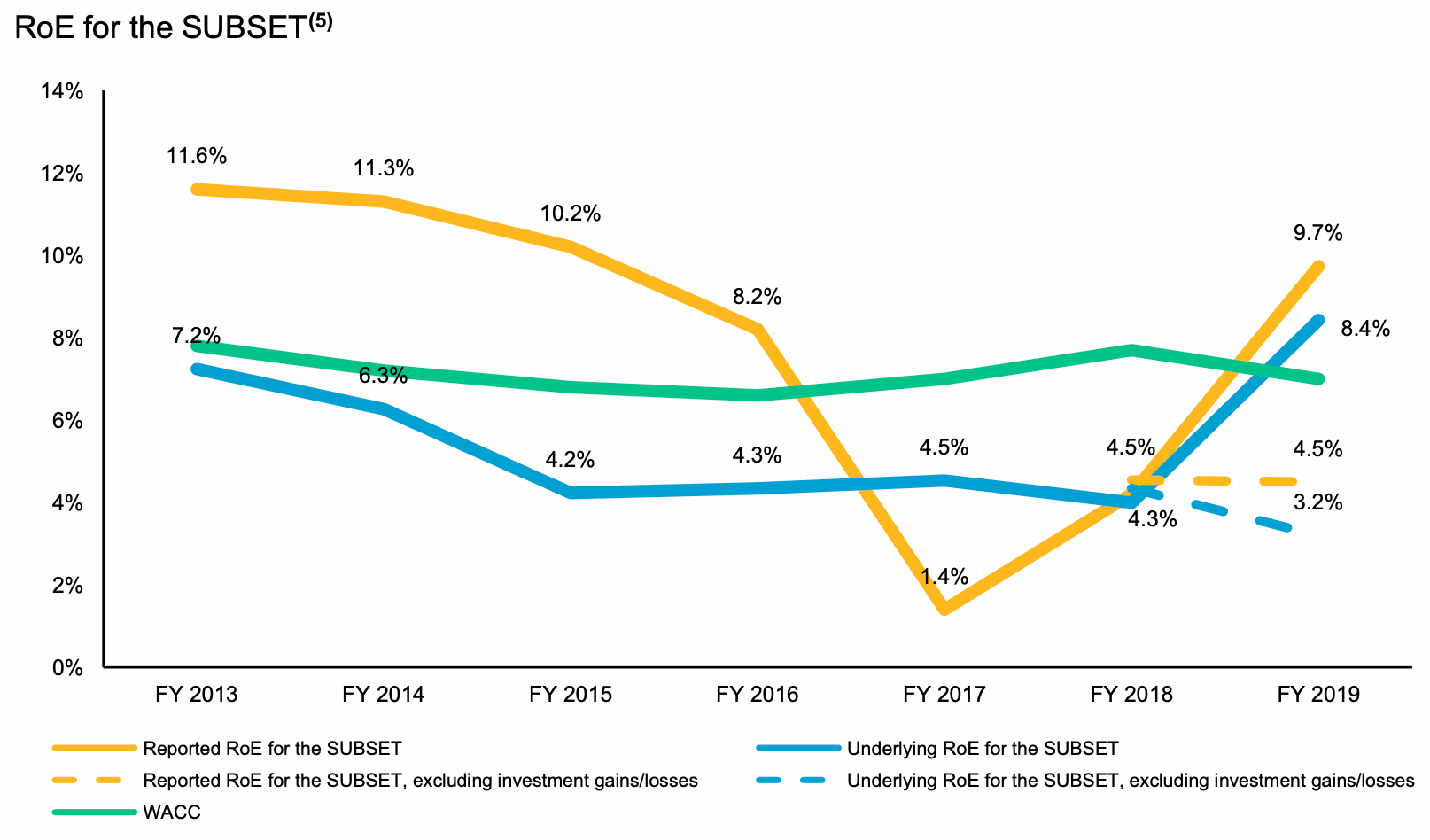 Willis Re CEO Kent said, “The analysis demonstrates that underlying profitability remains a core focus for reinsurers resulting in rate increases across many lines of business, to support the pricing momentum on loss impacted lines that started in some cases in mid-2018.”

The question is whether rate increases alone are enough to improve core metrics such as the combined ratio and return reinsurers to a level of underlying profit that beats cost-of-capital, or whether more needs to change to make this happen.

Reinsurance is in the business of underwriting, investment returns typically aren’t the core focus for investors and shareholders in choosing this industry to deploy their capital into. They will be looking for reinsurers to find ways to better their underlying combined ratios.

Cost of underwriting capital could also be a factor and if reinsurers struggle to control their underlying RoE’s and combined ratios they may become increasingly tempted to leverage more third-party capital within their businesses, as this can help to lower overall CoC for them.