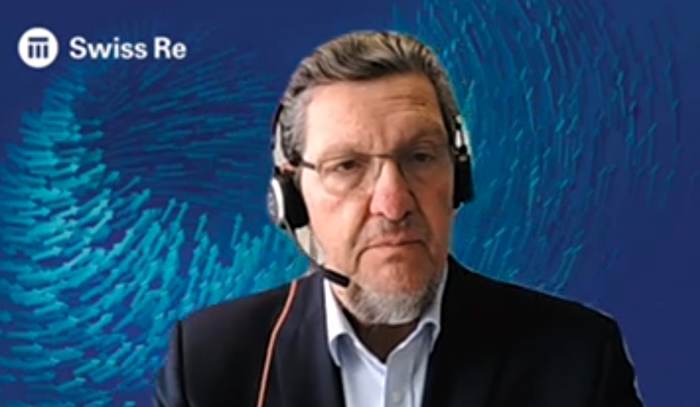 Speaking during a media briefing held in advance of next weeks’ Baden-Baden reinsurance meetings in Germany, Reichelt, the Head of Northern, Central & Eastern Europe at the global reinsurance firm, explained that climate change costs are currently not being covered in the insurance and reinsurance industry.

Reichelt’s commentary made it clear that Swiss Re believes that the industry has not been moving fast enough to cover the threat of climate change, also seeing a significant opportunity to target areas that climate risks are burgeoning.

But that coverage can’t be made available at any costs, so underwriting results remain a key focus for Swiss Re and the reinsurer is adamant that technical returns need to be generated from the business it underwrites, feeling that pricing is still running behind the trend needed to cover the weather and natural catastrophe risk landscape.

Reichelt explained that there is an “increasing need for reinsurance to support increasing catastrophe losses.”

“The effects of climate change are manifesting in greater weather extremes,” Reichelt explained. Saying that, “In combination with development and rising wealth, perils such as floods, wildfires and hail are set to deliver rising catastrophe losses.”

He said that “reinsurance prices need to rise to cover the rising costs of secondary perils,” which Reichelt noted is a particular issue in Europe right now.

With the 2021 Baden-Baden reinsurance meetings beginning next week, both in-person and virtually, the subject of European market catastrophe losses and where reinsurance rates are heading was a key component of Reichelt’s commentary today.

The major flooding in Europe in July is estimated to have cost the insurance and reinsurance industry around US $12 billion by Swiss Re.

But the reinsurer believes that climate change will make this kind of event a more regular occurrence and potentially much more impactful.

“We expect significant increases in insured losses from flood damage in the UK, France, Germany,” Reichelt said, saying that increases of as much as 200% are possible over the coming years.

Loss events in 2021 are “accelerating the demand for capacity to cover natural catastrophe and weather risks,” Reichelt continued.

Adding that, “Going forward, society cannot wait until the next event happens. Instead pre-emptive actions are needed.

“There is a need for more capacity now and it will grow further if our industry will be able to cover protection gaps.”

Ultimately, more protection is going to be needed, as climate risk puts increasing amounts of economic value-at-risk, which will need insuring.

“There is a need to adjust the prices for insurance and reinsurance to cover climate change,” Reichelt stressed.

Looking ahead to the January 2022 reinsurance renewals, Reichelt forecast, “We expect prices to rise in loss affected markets, depending on the size of the losses suffered.

“In loss free markets we expect prices to increase as well, but with the pace of increase decreasing.”

Importantly though, it is all about ensuring risks are being priced adequately to cover the rising exposure embedded in them.

“For the reinsurance industry to fulfil its commitment, the prices must be commensurate with the risks covered,” Reichelt said.

In part this is due to the level of catastrophe losses experienced in Europe this year, Kramer said, adding that these are viewed as having been exacerbated by climate change.

Kramer stated that this year’s loss events show that “climate change has arrived in Europe,” adding that “we know it’s here to stay and science tells us it’s even getting worse.”

It’s clear Swiss Re believes catastrophe reinsurance rates are going to rise in Europe, which will please the market, including the insurance-linked securities (ILS) sector.

European property catastrophe rates have remained depressed for a decade or more now, as major regional reinsurers have dominated that marketplace and driven rates down to levels where the ILS market has found many of the programs renewing their unattractive to participate in.

Will European catastrophe reinsurance renewals rise enough to make the risks more palatable to ILS investors? It feels at this stage like the ILS market may look to write a little more risk, selectively in Europe at these renewals, but it doesn’t feel likely the rate increases will make all programs attractive to write on a collateralised basis, as the major balance-sheet players are expected to continue dominating the continent.